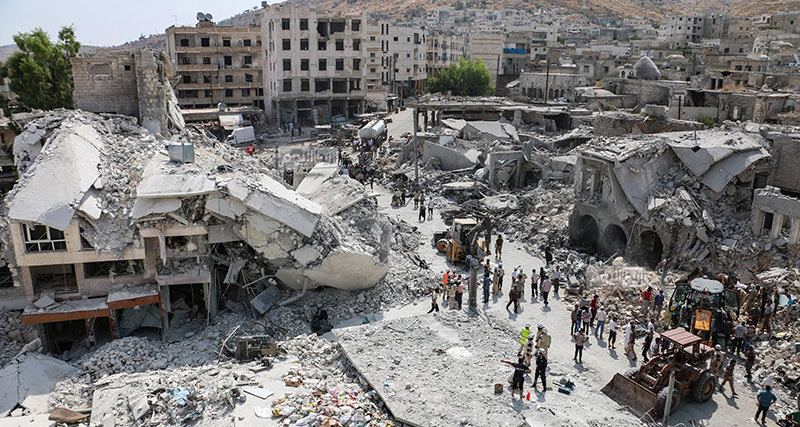 This photoshows the scene after a government warplane crashed in the center of the town of Ariha, in the northwestern province of Idlib, Syria, Monday, Aug. 3, 2015. (AP Photo)
by Anadolu Agency Dec 19, 2015 12:00 am
Thousands of Syrian refugees have taken refuge in northern Jordan after painful journeys of leaving their war-torn country.

Jordan has become one of the main destinations of Syrians fleeing the agony of war, receiving more than one million refugees since the war broke out in 2011.

Syrian refugees have left their homes, but the war also left its physical scars on their bodies in the form of injuries, burns and disability.

Mohamed Khaled is a young man in his 30s who joined the struggle against the Assad regime because of attacks on his hometown Daraa.

Khaled told Anadolu Agency that on Sept. 6, 2012, he had to jump from the third floor of a building where he was hiding from the regime. He preferred death to being arrested as his name was on a wanted list because he took part in anti-regime protests in Daraa.

Regime soldiers, however, had no mercy and Khaled was shot in the spine before they arrested him.

"I was treated at a military hospital so they could interrogate me, but they released me after they were sure that I wasn't able to walk," Khaled told Anadolu Agency. "And as you see, I'm paralyzed."

As Khaled tries to forget his disability, he keeps wishing for victory, but his sorrow is doubled because he cannot stop worrying about his brother who was 15 when the regime captured him four years ago.

His brother was arrested and charged with financing terrorism and incitement, but his fate remains unknown.

Zohour al-Zoghbi, 32, tried hard not to leave her home in al-Yadudah area in Daraa province where she stayed with her husband and their four children until February 2014.

"While my eldest 8-year-old son Mohamed was playing in our home's yard, a barrel bomb fell on us and shrapnel scattered everywhere," al-Zoghbi said.

Her son was hit in the chest and leg by shrapnel.

"The shrapnel was extremely hot and it was melting my boy's leg," she said. "I could not do anything to help him."

The stories of Syria's injured are endless, but the emotional scars they leave behind are even harder to bear.

Syria has been gripped by violence since the regime launched a crackdown in response to anti-government protests in March 2011, triggering a civil war in which more than 250,000 people have died, according to UN figures.