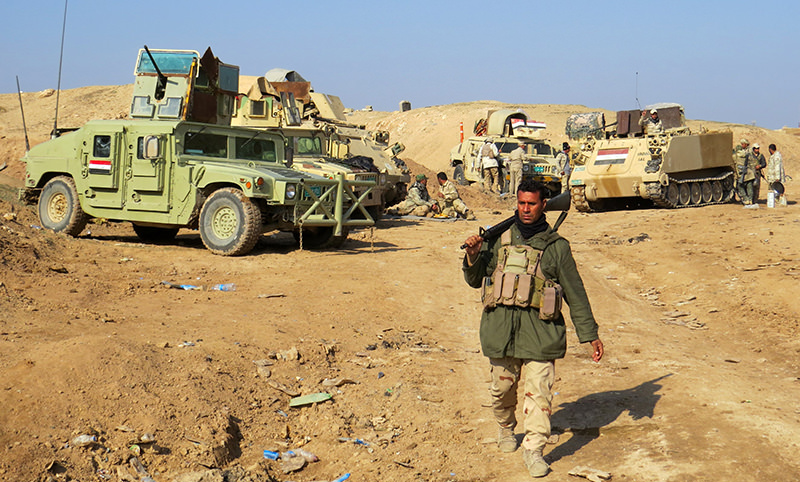 Iraqi pro-government tribal forces hold a position in the Tel Mushaihed area, east of Ramadi, a large city on the Euphrates 100 kilometres (60 miles) west of Baghdad (AFP Photo)
by Dec 21, 2015 12:00 am
Iraqi military planes dropped leaflets on Sunday on Ramadi, asking residents to leave within 72 hours the western city which is under the control of Daesh militants, an army spokesman said.

"It is an indication that a major military operation to retake the city center will start soon," one officer said on condition of anonymity.

The leaflets indicated safe routes for civilians to exit the city and asked them to carry proper identification documents, joint operations spokesman Brigadier General Yahya Rasool told Reuters by phone. "All security forces were instructed on how to deal with civilian approaching them."

Daesh terrorists are preventing civilians from leaving Ramadi ahead of an attack planned by the Iraqi army to retake the western city that the militants captured in May, an Iraqi Defence Ministry spokesman said on Monday.

"There are families that managed to escape the gangs of Daesh," the spokesman, Naseer Nuri, told Reuters, using a local derogatory name for the group.

"There is intelligence information from inside the city that they are preventing families from leaving; they plan to use them as human shields," he added, without indicating the number of those who had managed to flee.

Last week Iraqi security forces said they had made advances on two fronts in Ramadi, clearing Daesh terrorists from a military command base and the sprawling neighborhood of al-Taamim on the western rim of the city that they captured in May.

Iraqi intelligence estimates the number of Daesh fighters that are entrenched in the centre of Ramadi, capital of the Sunni Anbar province, at between 250 and 300.