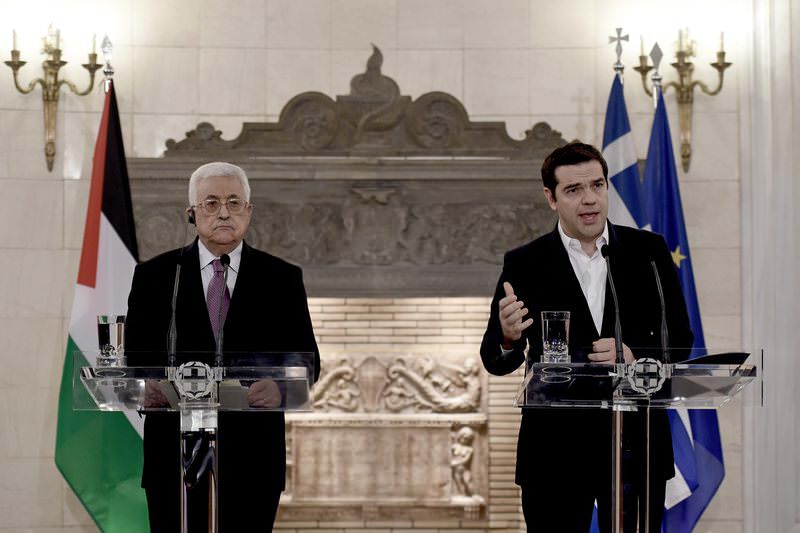 by Daily Sabah with AA Dec 22, 2015 12:00 am
Greek Prime Minister Alexis Tsipras called for an immediate end to the expansion of Israeli settlements and respect for the historical status quo of the holy sites, in a joint statement on Monday with Palestinian President Mahmoud Abbas in Athens.

Tsipras said that Palestinians were "fighting to find justice and whose struggle has touched and motivated struggles worldwide".

Tsipras also said in his statement that all, from now on, Greek public documents will use the term "Palestine" rather than the term "Palestinian Authority," emphasizing that Greece recognizes the country as a sovereign state.

The Greek premier also added that a resolution was needed for the Palestinian issue as it is "key" for peaceful developments in the Middle East.

"Unfortunately, we live at a time when our region is surrounded by negative developments, great instability, wars, interventions, and growth of terrorist organizations and terrorist attacks," said Tsipras at Maximos Mansion, the seat of the Greek prime minister.

Greece, he added, will commit to actively promote a two-state solution that "guarantees the establishment of a viable, territorially unified, independent and sovereign Palestinian state on the basis of the 1967 borders with east Jerusalem as its capital and which will coexist in peace and security with Israel".

"Our people and our land need to be defended by the international community in order to have peace and democracy, like other people do," Abbas said.

"So if the Palestinian issue is resolved, then the problem of terrorism that surrounds us all will also be resolved," Abbas also told Tsipras.