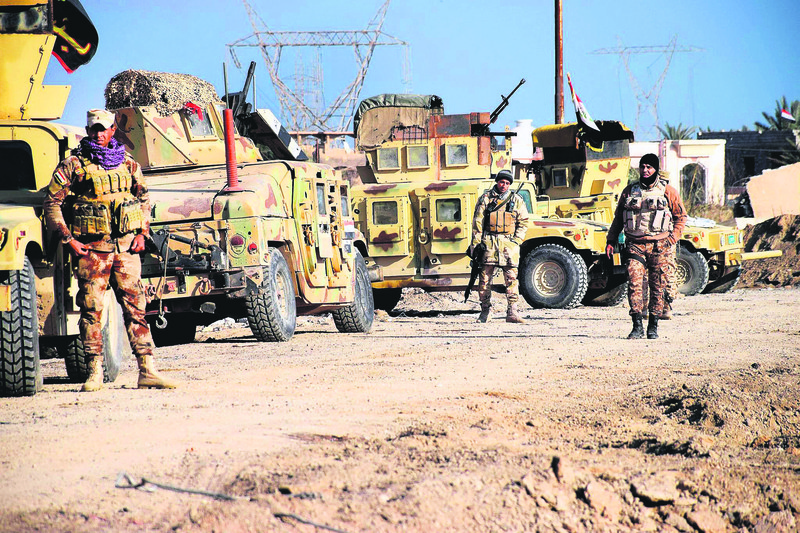 Iraqi soldiers have launched an operation to re-capture Ramadi from DAESH.
by Compiled from Wire Services Dec 23, 2015 12:00 am

Iraq's armed forces stormed the center of Ramadi on Tuesday, a spokesman for the counter-terrorism units said, in a drive to dislodge Daesh militants from their remaining stronghold in a city they captured in May. The operation to recapture Ramadi, a Sunni Muslim city on the river Euphrates some 100 km (60 miles) west of Baghdad, began in early November after a months-long effort to cut off supply lines to the city, whose fall to Daesh was a major defeat for Iraq's weak central government. 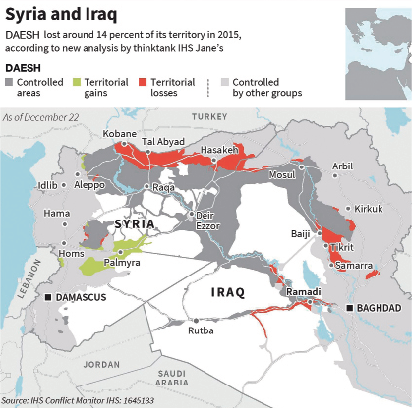 Progress has been slow because the government wants to rely entirely on its own troops and not use Shiite militias in order to avoid rights abuses such as occurred after the recapture of the city of Tikrit from the militants in April. U.S. officials have also cautioned against the use of Iran-backed Shiite militias in retaking Ramadi from the hardline Sunni militants to avoid fanning sectarian tensions. The Baghdad government has said it also wanted to spare civilians and give them the opportunity to leave the city. "Our forces are advancing toward the government complex in the center of Ramadi," the counter-terrorism units' spokesman Sabah al-Numani said. "The fighting is in the neighborhoods around the complex, with support from the air force." Iraqi intelligence estimates the number of Daesh fighters entrenched in the center of Ramadi, capital of Western Anbar province, at between 250 and 300.

The offensive to capture the city center started at dawn, said Numani. Military units crossed the Euphrates river into the central districts using a bridge that was destroyed by the militants and repaired by army engineers, he said. "Crossing the river was the main difficulty," he said. "We're facing sniper fire and suicide bombers who are trying to slow our advance, we're dealing with them with air force support." If the attack to capture Ramadi succeeds, it will be the second major city after Tikrit to be retaken from Daesh in Iraq. Retaking Ramadi would provide a major psychological boost to Iraqi security forces after Daesh seized a third of Iraq, a major OPEC oil producer and U.S. ally, last year.

Daesh also controls Mosul, Iraq's second largest city, and Falluja, which lies between Ramadi and Baghdad. However, a recent report showed that the group has started losing territory. Daesh lost around 14 percent of its territory in 2015, while Syria's Kurds almost tripled the land they control, think-tank IHS Jane's said on Monday.

The militant group's losses include the strategically important town of Tal Abyad on Syria's border with Turkey, the Iraqi city of Tikrit, and Iraq's Baiji refinery. Other big losses for the group include a stretch of highway between its Syrian stronghold Raqqa and Mosul in northern Iraq, complicating supply lines. "We had already seen a negative financial impact on the Daesh due to the loss of control of the Tal Abyad border crossing prior to the recent intensification of air strikes against the group's oil production capacity," said Columb Strack, IHS senior Middle East analyst. The U.S.-based think-tank said the group's territory had shrunk 12,800 square kilometers to 78,000 square km between the start of the year and December 14. However, Daesh has made some high-profile gains during the year, including the historic Syrian town of Palmyra and the city center of Ramadi, the provincial capital of Anbar, Iraq's largest province.
RELATED TOPICS