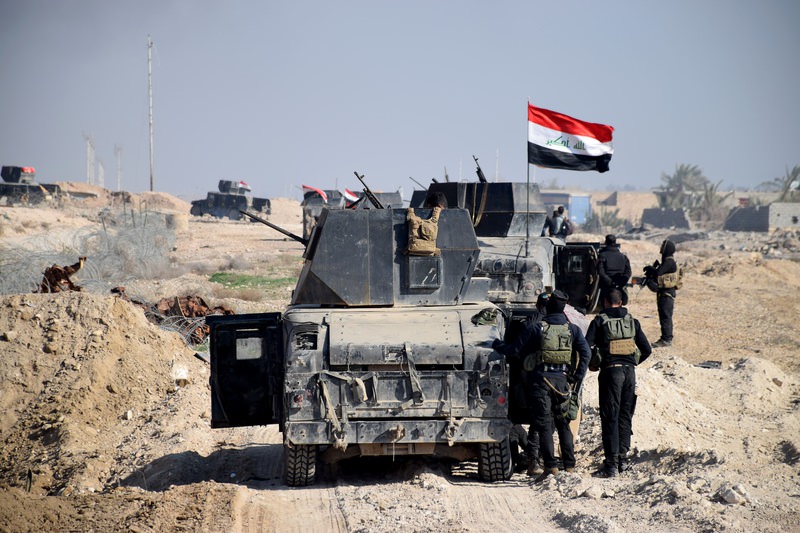 by Daily Sabah with AFP Dec 24, 2015 12:00 am
Iraqi forces battled the last Daesh militants holed up in the centre of Ramadi city Thursday, slowed in their advance by stiff resistance, booby traps and fears for trapped civilians.

Fighting raged around the former government headquarters in Ramadi, a key position whose recapture by federal forces would mark another key step toward reclaiming the city they lost to the Daesh terrorist organization in May.

"The Iraqi forces are in Hoz neighbourhood... about 500 metres (yards) away from the governmental complex," an army lieutenant-colonel told AFP from Anbar province.

"They are advancing very cautiously" in the southern neighbourhood of Hoz, said Sabah Karhout, the head of Anbar provincial council.

He said the huge number of improvised explosive devices planted by Daesh fighters in the city and the possible presence of trapped civilians being used as human shields were the main impediments.

Ramadi has suffered extensive destruction in months of fighting and Fadlawi said "some of the booby-trapped houses had to be remote-detonated to avoid casualties among the ordinance experts".

Daesh has positioned around 100 fighters along the main approach to the government complex, Warren said.

At least one government fighter was killed and seven others wounded in the latest hours of fighting in Hoz, the Iraqi army lieutenant colonel said.

And 22 wounded soldiers were brought in early on Thursday, said a medic at Abu Ghraib hospital, west of Baghdad.

Statements issued by Daesh spoke of higher casualties among government forces, including in an attack it said carried out with five suicide bombers early Thursday west of Ramadi.

It said the suicide commando crept up on a police position in an area called Kilo 110 and killed several of the forces there before setting fire to the armoury.

Iraqi army officials gave a different account of the attack, saying the attackers were killed by police bullets or the detonation of their suicide vests before they could reach their target while only three members of the police were wounded.

Ibrahim al-Osej, a Ramadi councillor, said the number of Daesh militants left in Ramadi was estimated to be "smaller than a battalion," or fewer than 400.

Several dozen families escaped the terrorists' grip on the city on Wednesday and were taken by the army to a camp in Habbaniyah, east of Ramadi.

Among them was 47-year-old Saad al-Dulaimi. He said Daesh fighters used them as human shields to escape before abandoning them outside of the city, where security forces screened and evacuated them.

"The situation in town was very difficult because there's no food left in the shops," Dulaimi told AFP by phone from Habbaniyah, where he and his family of five are receiving assistance from the army.

"We were living off dates and whatever food was left in our homes," he said, adding that he thought there were still dozens of families trapped in the city, unable to leave because of the air strikes and the fighting.

According to Warren, coalition aircraft dropped 50 bombs on Daesh targets in Ramadi on Wednesday alone.

The operation to retake Ramadi started months ago with Iraqi forces cutting Daesh supply lines to parts of Anbar before gradually closing in on the city, taking key bridges, roads and positions one after the other.

The loss of Ramadi in mid-May had been one of Baghdad's most stinging defeats in the war against Daesh fighters, who took over large parts of the country in June 2014 and subsequently proclaimed a "caliphate" straddling Iraq and Syria.

Retaking the city would provide a welcome morale boost to the much-criticised military.

The Shiite-dominated Hashed al-Shaabi paramilitary organisation that played a leading role in the recapture of other Iraqi cities has remained on the fringes of the Ramadi operation.

Besides Fallujah, Daesh militants still control most of Anbar, which is the country's largest province and has borders with Syria, Jordan and Saudi Arabia.
Last Update: Dec 24, 2015 9:15 pm
RELATED TOPICS