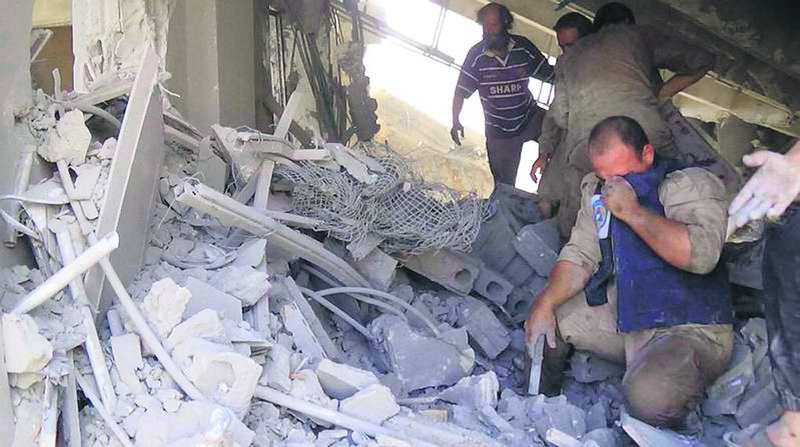 The aftermath of a Russian airstrike in Talbiseh, Syria that killed only civilians, according to activists.
by Daily Sabah with Reuters Dec 24, 2015 12:00 am

A report released by Amnesty International revealed that Russia has been targeting civilian areas, including medical facilities and schools. The group also found that Russia uses internationally prohibited bombs

A human rights watchdog on Wednesday accused Russia of using cluster munitions and unguided bombs on civilian areas in Syria in attacks that it says have killed hundreds of people in the past few months. The report by Amnesty International said there has been a surge in reports of cluster munitions dropped in areas targeted by Russian forces since Moscow formally joined the conflict Sept. 30. Cluster munitions are by nature indiscriminate and often leave unexploded bomblets on the ground. These can maim and kill civilians long after the cessation of hostilities. The report focuses on six attacks in Homs, Idlib and Aleppo provinces between September and November which it says killed at least 200 civilians. It denounced Russia's "shameful failure" to acknowledge civilian killings. "Some Russian air strikes appear to have directly attacked civilians or civilian objects by striking residential areas with no evident military target and even medical facilities, resulting in deaths and injuries to civilians," said Philip Luther, director of Amnesty's Middle East and North Africa program. "Such attacks may amount to war crimes," he said.

The accusations follow a report by New York-based Human Rights Watch last week which said cluster munitions were used on at least 20 occasions since Syria and Russia began their joint offensive on Sept. 30.

Russian officials have repeatedly rejected such accusations, and residents and opposition activists inside Syria acknowledge they have no way of knowing for sure whether the attacks are carried out by Russia or the Syrian military. When asked Monday about allegations that Russia is using cluster bombs, Russian President Vladimir Putin's spokesman Dmitry Peskov said the Russian military in Syria operates in line with international law. "Russia is conducting its operation in strict conformity with principles and norms of the international law, including those sections of the international law that regulate using and bans on using one or another type of weapons," Peskov told reporters. Russia says its airstrikes are aimed at Daesh and other "terrorists," but Western officials and Syrian rebels say most of the strikes have focused on central and northern Syria, where Daesh does not have a strong presence.

The report documented that Russia has killed hundreds of civilians in rebel-held territories, far from Daesh presence. In five cases highlighted in the report, suspected Russian air strikes in residential areas resulted in the deaths of 119 civilians and injuries to many more. "Amnesty International's research into these strikes indicates that there were no military objectives or fighters in the immediate vicinity of objects that were struck. This suggests that the attacks may have deliberately targeted civilian object or civilians, or failed to take feasible precautions to avoid, or at least minimize, harm to civilians and damage to civilian objects. As such they would violate international humanitarian law and may in some circumstances constitute war crimes," the report said.

The rights group also stressed that Russia has targeted medical facilities. "Suspected Russian air strikes have struck multiple medical facilities or the immediate vicinity of medical facilities, in some cases killing and injuring civilians. Medical facilities and medical personnel, as well as the protection of their civilian status, have special protection under international humanitarian law and parties to an armed conflict must respect and protect medical objects and personnel. On 20 October at around midday two missiles fired by suspected Russian warplanes struck the vicinity of Sermin field hospital in Idlib governorate, killing 13 civilians, whose names Amnesty International has obtained, and injuring 30 others. The first missile struck an empty school building some meters from the hospital and the second struck about 20m away," the report said.
Last Update: Dec 24, 2015 2:30 am
RELATED TOPICS