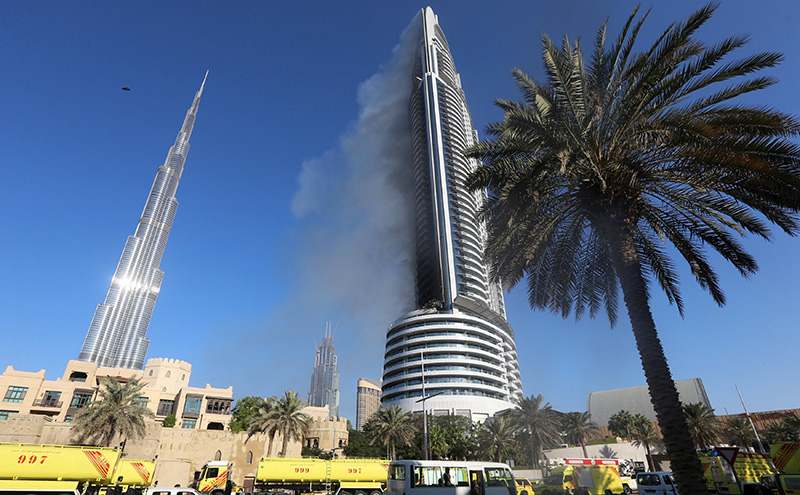 Plumes of smoke rise from the 63-storey Address Downtown Dubai hotel and residential block near the Burj Khalifa, the tallest building in the world, a day after the hotel caught fire | Reuters Photo
by Jan 02, 2016 12:00 am
A blaze that engulfed a Dubai skyscraper on New Year's Eve - the emirate's third high-rise fire in three years - has raised fresh questions about the safety of materials used on the exteriors of tall buildings across the wealthy region.

Hundreds of gleaming towers rose up in Gulf Arab states, especially the United Arab Emirates and Qatar, during the past decade's economic boom. Ultra-modern, flamboyant designs often involved heavy use of cladding - layers fixed to the outside of buildings for decoration, insulation or protection.

After Dubai's latest blaze, which security officials said spread up the outside of the 63-storey Address Downtown luxury hotel and residential tower, experts are asking if the layers may in some cases make buildings more vulnerable to fire.

"The fires that have erupted in Dubai landmarks have raised concerns about the quality of material used to clad the emirate's buildings," The National, a leading UAE newspaper, reported on Saturday.

Experts say most of Dubai's approximately 250 high-rise buildings use cladding panels with thermoplastic cores, the newspaper said. Panels can consist of plastic or polyurethane fillings sandwiched between aluminium sheets.

Such cladding is not necessarily hazardous, but it can be flammable under certain circumstances and, depending on a skyscraper's design, may channel fires through windows into the interiors of buildings, said Phil Barry, founder of Britain's CWB Fire Safety Consultants Ltd.

Barry told Reuters that, working as a consultant in the Gulf in 2012, he had identified "a general trend of fires in high-rises", which in some places indicated a need for stronger regulation and tougher building codes.

On Saturday, authorities were still investigating the cause of the fire at the Address Downtown. Dubai police said 14 people were lightly injured as the building was evacuated; a medic at the scene said over 60 people were treated for mild smoke inhalation and other complaints.

Mohamed Alabbar, chairman of Emaar Properties, which owns the hotel, said it had been built to the highest quality standards and following international best practice.

"We are determined to restore it to all its glory, and even surpass the splendid architectural standards," Alabbar said in a statement. He did not discuss the reason for the blaze or the financial impact on Emaar, or say when the hotel might reopen.

In February last year, hundreds of people were evacuated from one of the world's tallest residential buildings when fire broke out at the Torch, a 79-storey skyscraper in Dubai. An investigation by the building's management found most of the damage was to the exterior cladding.

In November 2012, a 34-storey residential building was partially gutted by a fire. An investigation blamed a discarded cigarette butt that fell on a pile of waste; the blaze swept through cladding panels on the tower.

The UAE revised its building safety code in 2013 to require that cladding on all new buildings over 15 metres (50 feet) tall be fire-resistant.

But the new rules do not apply to buildings erected before that year, and Barry noted that the vast majority of the country's skyscrapers fell outside the regulations; the Address Downtown was completed in 2008.

In an article published soon after last year's Torch fire, Barry Greenberg and Michael Kortbawi at UAE law firm Bin Shabib & Associates said the cost of replacing cladding on skyscrapers with safer materials would be "prohibitive".

But they added that the cost of not acting could prove even larger. "Total loss of a supertall building - requiring demolition and replacement - is a distinct possibility in the event of a fire," they wrote.