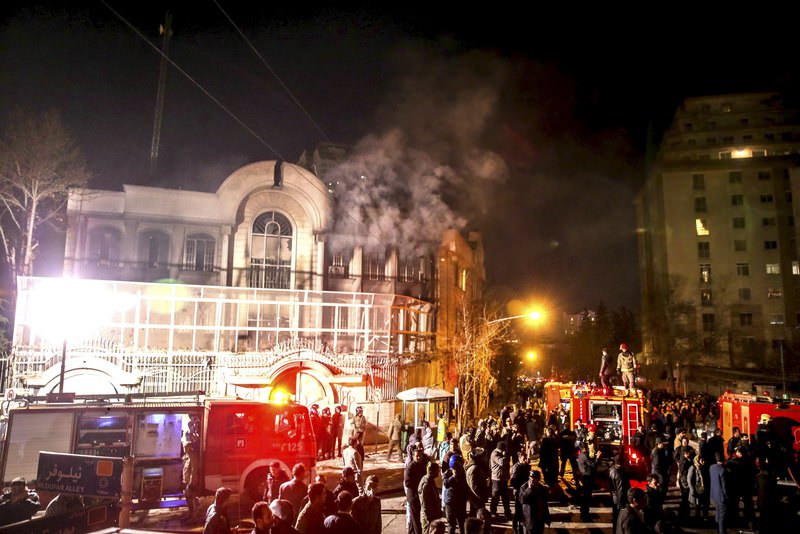 by Daily Sabah Jan 03, 2016 12:00 am
The United Arab Emirates on Sunday summoned Iran's ambassador after the attacks on two Saudi diplomatic missions in Tehran and Mashhad, the state-run Emirates News Agency (WAM) reported.

A group stormed the Saudi Arabian embassy in Tehran and the country's consulate in the northeastern Iranian city of Mashhad, smashed windows to protest Saudi Arabia's execution of 47 people, including a prominent Shia cleric, on terrorism charges.

"These acts represent a violation of international charters and norms," the UAE Ministry of Foreign Affairs said.

According to the report, the UAE also handed the Iran's ambassador a written protest note over Tehran's flagrant interference in the kingdom's affairs.

The note also condemned Iran's provocative statements regarding the executions, saying the county's attitude is fuelling the tension in the region and added that Iran has to respect its international obligations on diplomatic missions and the protection of diplomats in its soil.

Executed Shia cleric Nimr Baqir al-Nimr, who, before his arrest in July of 2012, had led mass protests against the Saudi authorities in the kingdom's eastern Qatif province.

In a ruling handed down by a top Saudi court on Oct. 25, al-Nimr was convicted of "inciting sedition and revolt".