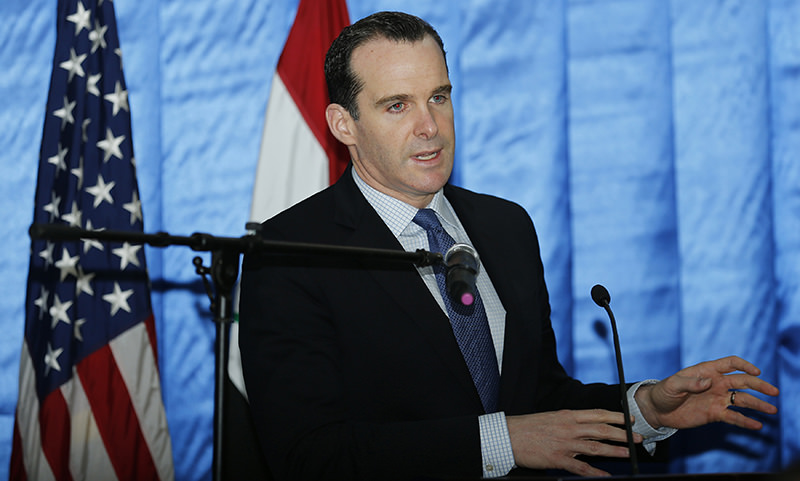 The USu2019s new envoy to the coalition Brett McGurk speaks to reporters during a news conference at the U.S. Embassy in Baghdad, Iraq, Dec. 9, 2015 (AP Photo)
by Daily Sabah with AA Jan 05, 2016 12:00 am
Tension between Saudi Arabia and Iran has not had an imminent implication for the anti-Daesh campaign, but could, a top U.S. envoy said Tuesday.

"So far we have not seen any impact on the overall ISIL campaign," said Brett McGurk, U.S. presidential envoy for the U.S.-led coalition fighting Daesh.

"Obviously, it's something that we're concerned about, and that's why the secretary has spent so much time on it," he said, referring to Secretary of State John Kerry.

He also expressed concerns that polarization in the region could enable extremists on both sides to take advantage of the situation, which might play "into the hands of groups like Daesh."

"We are encouraging a de-escalation," said John Kirby.

Kerry has worked the phones with those leaders since Monday after relations between Saudi Arabia and Iran broke down following the execution of prominent Shia cleric Nimr Baqir al-Nimr and 46 prisoners who had, for the most part, been convicted of committing acts of "terrorism".

Before his arrest in July 2012, al-Nimr led mass protests against Saudi authorities in the country's eastern Qatif province.

On Sunday, Saudi Arabia announced the cutting of diplomatic ties to Iran after attacks on its missions.

Turkey's foreign ministry on Tuesday expressed concern over recent attacks on Saudi Arabia's missions in Iran, while Kuwait recalled its ambassador to Iran.