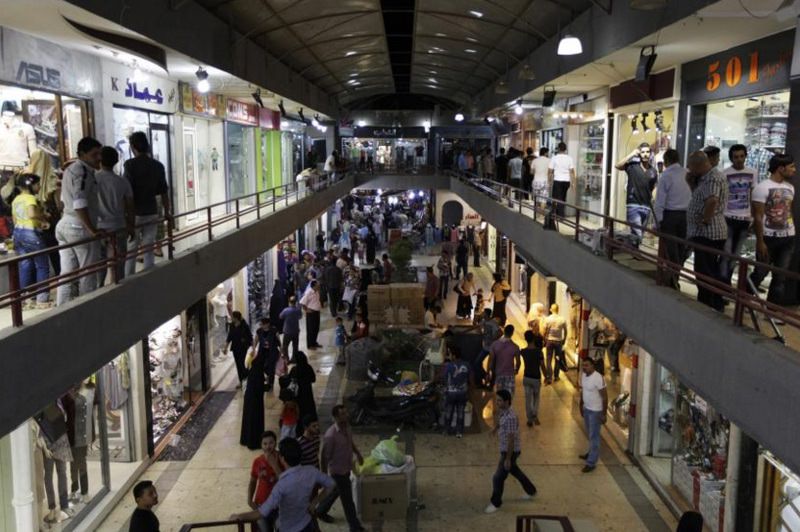 by Daily Sabah with Agencies Jan 11, 2016 12:00 am
Gunmen detonated suicide vests inside a shopping mall in Baghdad on Monday and a car bomb exploded nearby in an attack claimed by Daesh that killed at least 18 people and wounded 40 others.

Two bombs later went off near a casino in the eastern town of Muqdadiya, killing at least 23 people and wounding another 51, security and medical sources said. Another blast in a southeastern Baghdad suburb killed seven more.

Daesh militants controlling swathes of Iraq's north and west claimed responsibility for the mall and casino attacks, which it said had targeted a gathering of "rejectionist heathens", its derogatory term for Shi'ite Muslims.

"We harshly condemn the deadly terrorist attacks on a shopping center in Iraq's capital Baghdad and Diyala province that killed and injured tens of people," the Foreign Ministry said in a statement.

The statemen also said that Turkey would continue to support Iraq's fight against terrorism.

The officials initially described the mall attack as a hostage situation, estimating that 50 people were trapped inside the complex. But Iraqi forces soon surrounded the building and landed troops on the roof. They clashed with the attackers inside, killing two of them, arresting another four and declaring the standoff over.

At least four police were among those killed in the assault, which lasted around an hour and a half, according to the police and medical officials, who spoke on condition of anonymity because they were not authorized to brief reporters.

Following the attack, authorities shut down the city's highly fortified Green Zone, home to a number of foreign embassies and most of the country's political elite. A number of major roads, shopping malls and bridges around the Iraqi capital were also closed for fear of follow-up attacks.

Also on Monday evening, a car bomb in southeast Baghdad in a crowded market area killed five and wounded 12, according to hospital and police officials.

No one immediately claimed responsibility for either attack, but the Daesh terrorist group often targets the country's Shiite majority with bombs in crowded marketplaces that are designed to kill large numbers of civilians.

Daesh group controls much of northern and western Iraq, but suffered a major defeat last month when Iraqi forces drove the militants out of the western city of Ramadi, capital of the sprawling Anbar province.

The Daesh rampage across Iraq in the summer of 2014 was halted several miles away from Baghdad, but the group has claimed a number of attacks in the heavily guarded capital since then.
Last Update: Jan 12, 2016 12:06 am
RELATED TOPICS