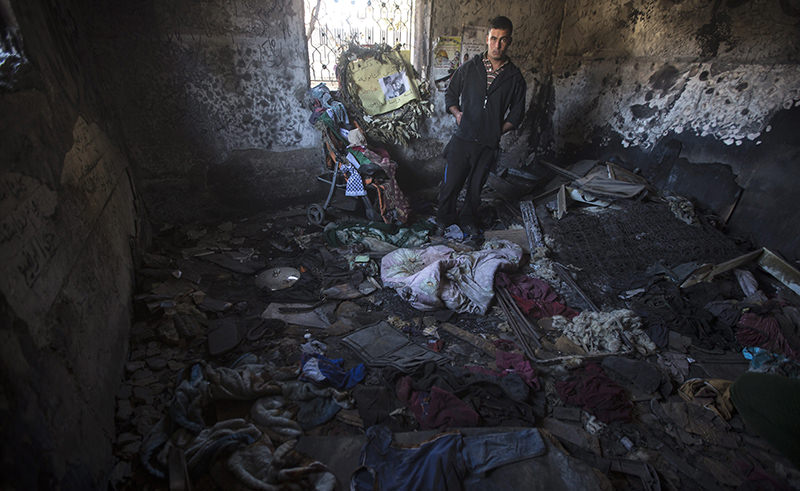 A fire-ravaged room of the Dawabsheh family home as a relative stands inside, in the West Bank village of Duma, near the city of Nablus (EPA Photo)
by Anadolu Agency Jan 18, 2016 12:00 am
The orphaned survivor of a fatal arson attack on a Palestinian family will learn this week the fate of his family, five months after the attack.

Five-year-old Ahmad Dawabsheh lost his 18-month-old brother Ali and both of his parents when their home in the occupied West Bank village of Duma was attacked by Israeli settlers in July.

"We want this week to tell him what happened to his family. The psychiatrist will be with him in the hospital [when we tell him the story]," Ahmad's uncle Nasser Dawabsheh told Anadolu Agency.

He said the grandparents, uncles and aunties who have remained at Ahmad's bedside since the settler attack, which left him with burns on 60 percent of his body, will all give him the news of how his family was killed.

Nasser Dawabsheh said he and the doctors believed they had to tell Ahmad the full story after avoiding the topic while he went through months of treatment. He added that he believed Ahmad might not fully understand the impact of the loss because of his young age.

In December, Ahmad's grandfather Hussein Dawabsheh told Anadolu Agency that telling Ahmad about the deaths of his parents and brother would be "the hardest day ever."

He added that Ahmad, who is currently going through rehabilitation to regain use of his legs, will remain in hospital for at least three months more.