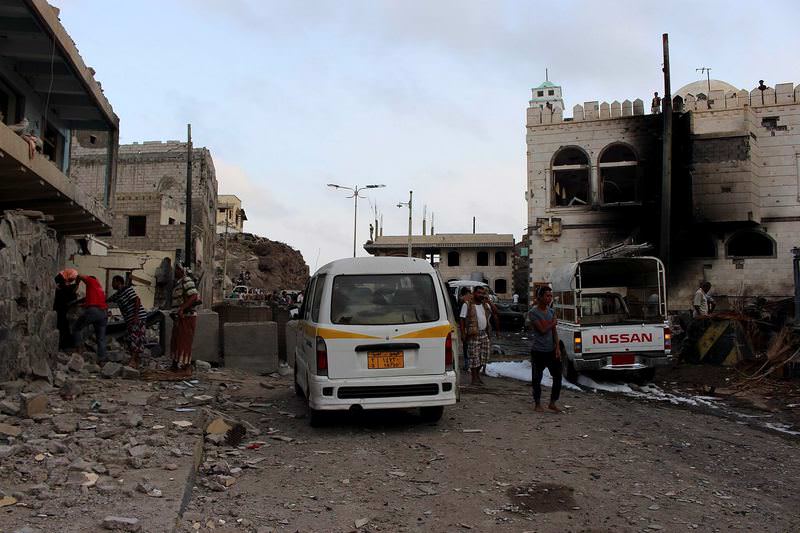 Airstrikes, street clashes and suicide bombers continue to damage the buildings in Aden.
by Daily Sabah with AA Feb 04, 2016 12:00 am

The city of Aden, strategically important in the war between the Saudi Arabia-led coalition supporting President Abed Rabbo Mansour Hadi and Iranian-backed Shiite rebels, continues to suffer while hundreds of children have been killed and infrastructure and buildings destroyed

The northern city of Aden, which houses the headquarters of Yemen's internationally recognized government, has been rocked by a wave of suicide bombings and assassinations in January, marking one of the deadliest months in the history of the seaport city. "Bombings and assassinations in Aden and other liberated areas are part of an ongoing dirty war," Yemeni lawmaker Aydarus al-Naqib told the Anadolu Agency (AA). Last week, seven people were killed in a suicide bombing that targeted a police checkpoint in Aden. The attack came a few days after another suicide attack killed at least eight people, including soldiers and civilians, outside of the presidential palace in Aden. Last month also resulted in the targeted assassinations of several government officials, police officers and religious leaders. Naqib, the head of the parliamentary bloc of the Yemeni Socialist Party, believes that such attacks are intended to spark fear and panic in Aden and other government-controlled areas. "It is also an attempt to prove that officials in liberated areas are not fit enough to provide security or services and are unable to keep the people safe," he said. "This is all meant to elicit desperation among the people, and make them crave the old days of the former regime."

Yemen has remained in turmoil since September 2014, when militias from the Shiite Houthi minority and forces allied to former President Ali Abdullah Saleh overran Yemen's capital Sanaa as well as other parts of the country, forcing President Abed Rabbo Mansour Hadi and his government to flee to Saudi Arabia. Yemen's slide towards civil war has made the country a crucial front in the rivalry between predominantly Sunni Saudi Arabia and the predominantly Shiite Iran, which Riyadh accuses of stirring up sectarian strife by showing support for the Houthi rebels. Sunni Arab monarchies around Yemen have condemned the Shiite Houthi takeover, calling it a coup. The advance of the Iranian-allied Shiite Houthi rebels raises fears that the the country may disintegrate. Sanaa has been under Houthi rebel control since September 2014. Yemen has been facing severe political instability after the takeover of the presidential palace by Houthi militants, prompting Hadi to tender his resignation. Hadi fled to the southern port city of Aden, where he re-established his presidency. As the country continues to be dragged into civil war, the U.N. has started to hold mediated peace talks between Houthis and Hadi's government in a bid to bring peace and stability back to the country. In March 2015, Saudi Arabia and its Arab allies began an extensive air campaign aimed at reversing Houthi gains in Yemen and restoring Hadi's government. Hadi has since returned to Aden, which currently serves as the temporary seat of his government.

Local council member Abdel-Maguid al-Salahi criticized the government for failing to prevent attacks in areas under its control. "The government has to be more serious in dealing with the [security] file," Salahi told Anadolu Agency (AA). He said that failure to maintain security will encourage militant groups to carry out more attacks. "The government has to take certain measures which aim to prevent [militant] groups from expanding further," he said. Salahi listed the installation of CCTV cameras and strict search operations as being among the measures that the government should take to prevent further attacks. "The government also has to create anti-terror forces in coordination with coalition forces, and deploy trained forces across Aden [to prevent further attacks]," he said. According to the U.N., more than 5,800 people have been killed in Yemen, roughly half of them civilians, since the Saudi-led coalition forces launched its air campaign.

Brig. Gen. Ahmed Al-Assiri, spokesman of the coalition forces and advisor at the office of the minister of defense, was quoted by Reuters as saying that, "Mortars and rockets fired at Saudi Arabian towns and villages have killed 375 civilians, including 63 children, since the start of the Saudi-led military campaign in Yemen in late March."

Reuters has reported that along the Saudi-Yemen border, constant attacks by the Houthis and Saleh's forces have forced the Saudi authorities to evacuate a dozen villages and over 7,000 people from frontier districts, and close over 500 schools.
RELATED TOPICS