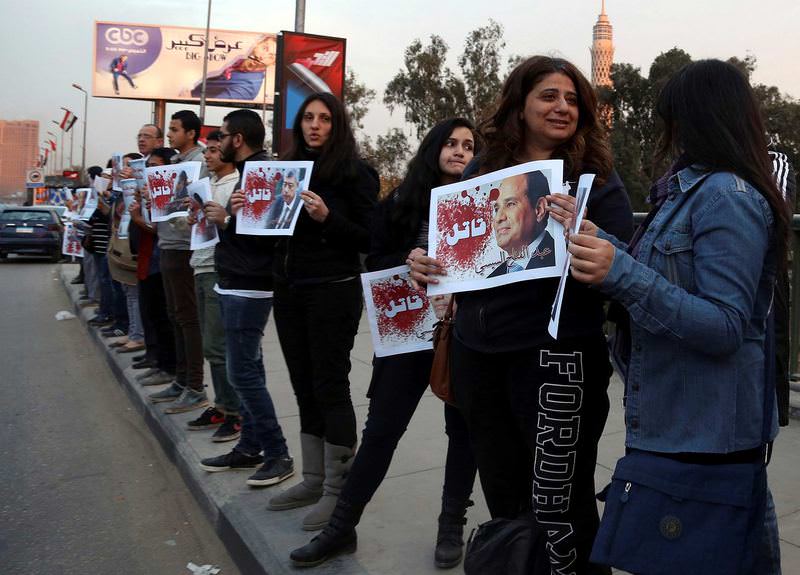 Protesters hold posters of Egyptian President Abdel Fattah el-Sissi (R) and Interior Minister Mohamed Ibrahim with the word ,Killer, on it during a silent protest over a bridge in Cairo.
by Compiled from Wire Services Feb 24, 2016 12:00 am

Egyptian Interior Minister Ibrahim has apologized for human rights abuses amid growing outrage in the country over the police abuse, arbitrary detainment and torture while the government has been criticized by several groups of different backgrounds

Egypt's interior minister apologized Monday for human rights abuses committed by police after a policeman killed a driver with his service weapon in Cairo last week. Magdy Abdel Ghaffar also said that authorities were exerting "huge efforts" to investigate last month's torture and murder of Italian student Giulio Regeni, which media in Italy suspect to have been the work of Egyptian security services. "We apologize to every citizen who has been insulted," the minister said at a joint press conference with Prime Minister Sharif Ismail broadcast live on state television. "We apologize for the acts of some policemen, we kiss the head of every citizen subjected to abuse or insult or any unkind act by policemen," he said, in a rare apology by Egyptian authorities.

Policeman Mustafa Mahmud is alleged to have shot dead driver Mohamed Ismail with his police-issued firearm late Thursday in central Cairo after a row over the fare for a delivery. The killing triggered outrage on social media and dozens of people staged a protest outside Cairo police headquarters. A day after the shooting, President Abdel Fattah el-Sissi said he would ask parliament to amend the law to toughen sanctions for police abuses. Police abuse was a key factor that sparked the 18-day uprising that toppled longtime president Hosni Mubarak in 2011. Five years on, human rights groups are again denouncing the police force after a string of torture and deaths in police stations, arbitrary arrests and the disappearances of el-Sissi regime opponents.

Abdel Ghaffar said the authorities were exerting "huge efforts to reveal (circumstances of) the mysterious" death of Regeni, a Cambridge University PhD student from Italy who disappeared on January 25 in Cairo. His body was found with signs of torture on February 3 in a ditch in a suburb of the Egyptian capital. Italian media has charged that Egyptian security services were involved in his death, a charge rejected by Cairo. Prime Minister Ismail said the image of the police needed to be "transformed" in the eyes of Egyptians. "There will be no laxity and we will not cover up any (violation)" by the police, he said, standing alongside Abdel Ghaffar. "This is a commitment from the police, a firm commitment. If there is any violation from some individuals, they will be held accountable." Over the past year, several policeman have been detained for violence against prisoners and some have been sentenced to jail terms.

El-Sissi said Friday he will introduce new laws against police violations or amend current ones. The irresponsible acts of some policemen should be confronted by abiding laws to hold them accountable, al-Sissi said during a meeting with Interior Minister Magdy Abdel Ghaffar in the resort city of Sharm al-Sheikh, according to presidential spokesman Alaa Youssef. New legislation will be presented for discussion to parliament within 15 days, Youssef added.

Meanwhile, An Egyptian organization that documents rights abuses and treats torture victims said on Sunday it had filed an urgent application to a court in the hope of halting plans by authorities to shut it down on Monday. The director of the Nadeem Center for the Rehabilitation of Victims of Violence and Torture told a news conference that a health ministry decision to shut it down was part of the toughest crackdown on dissent in Egypt's modern history. "This is a political decision," said Aida Seif el-Dawla. "And it's coming from the cabinet that represents all the actors that are keen on the survival of this regime, despite the oppression and the torture that the Egyptian people are living through on a daily basis." Sources in the Health Ministry, which issues licenses for the Nadeem Center, have said it committed unspecified violations. Staff of the organization said on Sunday its complaint to the administrative court argued that it should have been informed of any violations of regulations and given time to rectify them. The center would continue to operate, said staff member Suzan Fayad, despite the closure order, which the authorities plan to implement on Monday.

A prominent columnist on Sunday delivered the harshest attack to date against Egypt's president in the local media, saying that, in terms of freedoms, el-Sissi's rule is not different from the previous regime. In a front-page column in the al-Maqal daily, Ibrahim Eissa expressed outrage over a two-year prison sentence passed Saturday against author Ahmed Naji for publishing a sexually explicit excerpt of his novel that prosecutors said violated "public modesty." Naji's case follows a series of convictions against writers and reformist religious thinkers that have given rise to questions about el-Sissi's declared commitment to the reformation and moderation of Islam's discourse as a means of combating religious militancy. El-Sissi has tirelessly boasted since 2013 that his ouster of Egypt's first democratically elected president, Mohammed Morsi saved Egypt from the Brotherhood's tyrannical theocracy, but Eissa on Sunday wrote that Morsi's record on freedoms of expression was better than el-Sissi's.
RELATED TOPICS