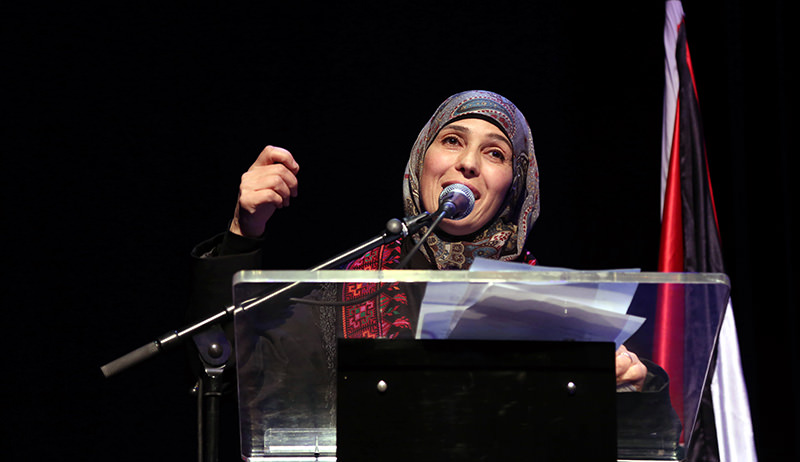 | AA Photo
by Anadolu Agency
Feb 24, 2016 12:00 am
A teaching method that focuses on promoting non-violence has turned a Palestinian educator into a finalist at a global competition.

Hanan al-Hroub, 43, was shortlisted for the Global Teacher Prize, which is set up by the U.K.-based Varkey Foundation.

"My teaching method focuses on promoting non-violence by teaching through playing," al-Hroub told Anadolu Agency in an exclusive interview.

She said this teaching technique has helped her advocate values and tackle certain behavioral problems among students.

The annual competition honors an exceptional teacher who has made an outstanding contribution to the profession.

Al-Hroub is one of the top 10 finalists. The winner will receive a $1 million prize at an awards ceremony in March.

There are around 44,000 teachers in the West Bank and Gaza Strip, according to the Palestinian Education Ministry.

The idea of the non-violent teaching method came to al-Hroub after her husband was shot by Israeli forces in the occupied West Bank city of Bethlehem during the al-Aqsa intifada, which erupted in 2000.

"My husband was injured. The Israeli soldiers laughed at him and left him [to bleed to death]," al-Hroub recalled. "This incident has left my children in shock. This teaching technique, however, has helped them recover and regain their self-confidence."

Al-Hroub said she hopes to win the award in order to put her country on the world map.

"This win will send a message that the Palestinian teacher is able to overcome all difficulties," she said. "I say that a victory for my teaching method is a victory for Palestine."
Last Update: Feb 24, 2016 11:35 am