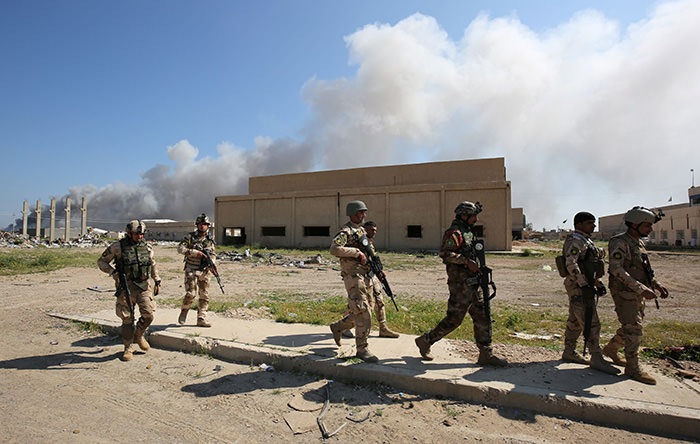 Iraqi soldiers patrol the site of an army position where an attack was carried out by Daesh in Abu Ghraib area west of Baghdad, on February 29, 2016 (AFP Photo)
by Associated Press Mar 02, 2016 12:00 am
Continuous violence has left at least 670 Iraqis dead in February, of whom about two-thirds were civilians, the United Nations said.

In a statement issued on Tuesday, the U.N. Assistance Mission for Iraq, known as UNAMI, put the number of the killed civilians at 410, a figure which according to U.N. methodology includes the federal police, civil defense forces and personal security details. The rest were security forces, including Kurdish peshmerga and paramilitary troops.

It added that a total of 1,290 people were wounded, including 1,050 civilians. The worst affected area was Baghdad, with 277 civilians killed and 838 injured.

Citing its local health authorities, the U.N. said at least four civilians were killed and 126 others wounded in the western province of Anbar, which has large areas under Daesh extremist group control. The U.N said it could not fully verify the Anbar figures due to the increased volatility of the situation on the ground and the disruption of services.

In January, overall causality figures were at least 849 killed and 1,450 wounded.

"This conflict continues to exact a heavy toll on the population," the U.N. Special Representative for Iraq, Jan Kubis, said in the statement. "This is deeply worrying and disheartening. Civilians should not pay the price in this conflict," Kubis added.

February saw significant deterioration in Iraq's security situation, with two massive bombings in as many days by the Daesh group in the town of Muqdadiyah and in Baghdad that killed at least 110 people.

Daesh seized much of northern and western Iraq, including the second largest city, Mosul, in the summer of 2014.

With heavy backing from U.S.-led coalition airstrikes, Iraqi troops scored key victories against Daesh since last year. But a long-awaited campaign to retake Mosul, the main city held by the militants, has yet to begin.
Last Update: Mar 02, 2016 1:53 pm
RELATED TOPICS