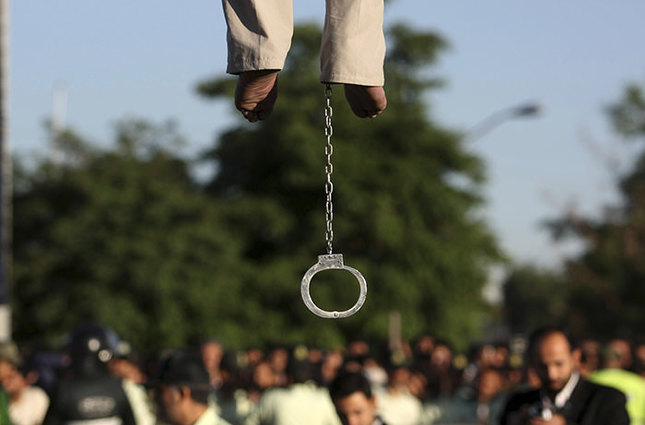 The executions took place as Tehran was negotiating with world powers on a nuclear inspection deal that would see Iran begin to rehabilitate itself in the international community.

The report from Ahmed Shaheed, the UN's special rapporteur on human rights in Iran, said at least 966 were executed in 2015. In the previous year, 753 people were executed.

He also noted concerns over the execution of juveniles and said 16 had been executed between 2014 and 2015 -- the greatest number in the last five years.

Around two-thirds of executed convicts were sentenced for drug-related offenses and one-in-five executions were of murderers.

His report pointed to a number of reforms to Iran's penal code since 2013, such as improved access to legal advice, but said parts still violated human rights.

"Outstanding and emerging issues highlighted in the present report, including serious problems related to the administration of justice and the need for additional legal reform, require immediate attention," the report said.

The report highlighted sections of Iranian law that prescribe the death penalty for boys of 15 and girls aged nine for offenses such as homicide, adultery and sodomy.

At least 73 juvenile offenders aged below 18 were executed between 2005 and 2015 according to human rights groups, although these figures have never been officially reported.

Citing the same sources, the report said at least four juvenile executions took place in 2015 and 160 under-18s were on death row.

Shaheed said unverified reports claimed that "at least one Afghan national awaiting execution for a drug-related offense was under 18 years of age at the time of his arrest".

Among journalists and activists currently imprisoned in Iran, the report highlights the case of Isa Saharkhiz, arrested alongside three other journalists in November by the intelligence unit of the Revolutionary Guards. Officials have refused to provide information on the circumstances of their detention.

Those arrested by intelligence agencies are "routinely subjected to blindfolding, harassment, ill-treatment, torture and coerced confessions during pretrial detention and interrogations," the report added.

The appointment of Saleh Adibi, a Sunni Muslim, as ambassador to Vietnam and Cambodia is recognized as a positive development. He is thought to be the first Sunni to be appointed as a diplomatic representative since the 1979 revolution.