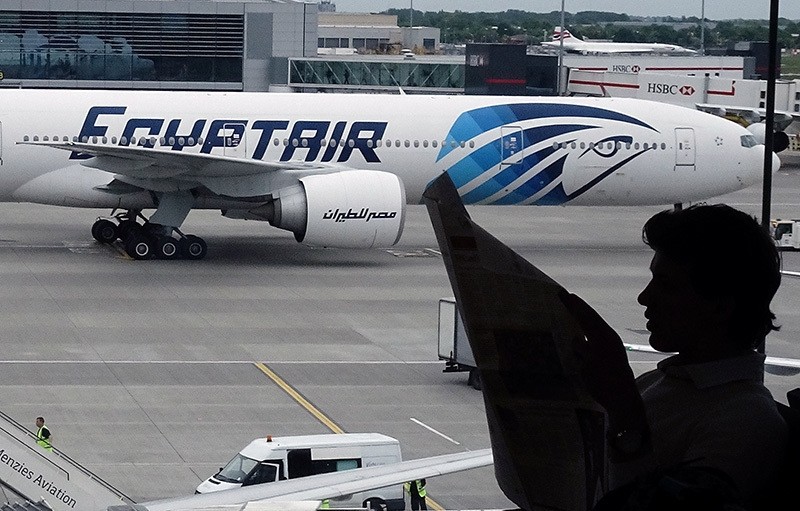 A passenger reads a newspaper at a departure hall of London's Heathrow terminal as an EgyptAir plane taxis on the tarmac of the airport May 20, 2016.(Reuters Photo)
by Compiled from Wire Services May 21, 2016 12:00 am
Smoke was detected on the doomed Egyptair plane shortly before it crashed, a spokeswoman for French air accident investigation agency BEA told German Press Agency (DPA) on Saturday, confirming earlier media reports.

The agency cautioned that no conclusion as to what caused the crash could yet be drawn.

The spokeswoman said smoke was detected in a lavatory and the information sent via ACARS, or Aircraft Communications Addressing and Reporting System, which transmits short condition updates to ground stations by radio or via satellite.

The Egyptian military found the personal belongings of passengers and other debris from an EgyptAir jet floating in the Mediterranean, Cairo said on Friday, confirming that the plane had plunged into the sea with 66 people on board. The navy said it had found the debris about 290 km north of the coastal city of Alexandria and was sweeping the area in search of the plane's black box recorders.

Although fingers pointed towards extremist militants who blew up another airliner over Egypt just seven months ago, no group had claimed responsibility more than 24 hours after the disappearance of flight MS804, an Airbus A320 that was flying from Paris to Cairo.

Three French investigators and a technical expert from Airbus arrived in Cairo early on Friday to help investigate the fate of the missing plane, airport sources said. Egyptian Prime Minister Sherif Ismail said on Thursday that it was too early to rule out any explanation for the disaster. The country's aviation minister said a terrorist attack was more likely than a technical failure. Friday's announcement that debris had been found followed earlier confusion about whether wreckage had been located. Greek searchers found some material on Thursday, but the airline later said this was not from its plane. Yet France's foreign minister Jean-Marc Ayrault asserted Friday on France-2 television that there is "absolutely no indication" of what caused the crash. The junior minister for transport, Alain Vidalies, said on France-Info radio that "no theory is favored" at this stage and urged "the greatest caution."
Last Update: May 21, 2016 11:46 am
RELATED TOPICS