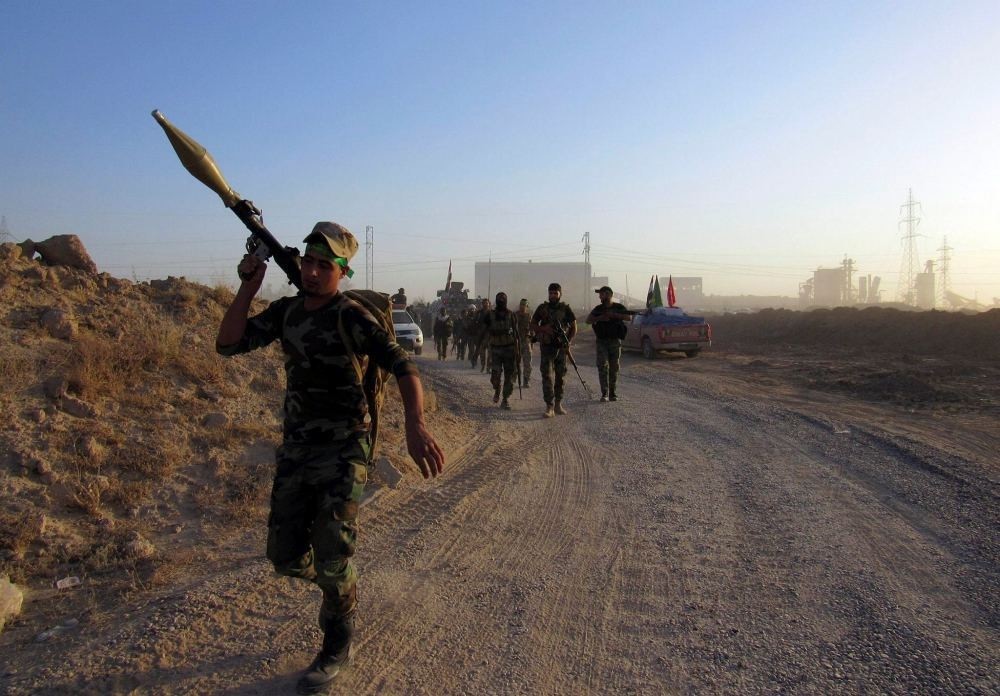 Iraqi forces along with Iranian-backed Shiite militias combat DAESH militants in Fallujah.
by Compiled from Wire Services May 25, 2016 12:00 am

At least 50,000 Iraqi civilians are at great risk in Fallujah since Iraqi forces, Iranian-backed Shiite militias and the U.S.-led anti-DAESH coalition bomb the city to clear it of DAESH militants

Clashes between Iraqi government forces and DAESH outside the city of Fallujah briefly subsided on Tuesday, the second day of a large-scale military operation to drive militants out of their key stronghold west of Baghdad. Backed by U.S.-led coalition airstrikes and paramilitary troops, mostly Shiite militias, Iraqi forces launched the offensive on Sunday. The push to take Fallujah is expected to be a challenge for Iraq's struggling security forces due to defenses put up by the militants and the thousands of civilians who remain there. DAESH has held the city for more than two years. In nearby Garma, Mayor Ahmed al-Halbosi said engineering teams were clearing booby traps from houses and government buildings on Tuesday, a day after capturing most of the town. Garma is just east of Fallujah and is considered a main supply line for DAESH. Col. Mahmoud al-Mardhi, in charge of paramilitary forces, said they were still encountering pockets of resistance in Garma outskirts, adding that they killed at least six militants on Tuesday holed up in buildings. He said Fallujah is now completely isolated.

According to the U.S.-led coalition and the United Nations, there are about 60,000 to 100,000 civilians remaining in Fallujah, down from more than 250,000 people in past years. The United Nations called Monday for "safe corridors" to be set up to allow the citizens to flee. Some 50,000 civilians in the city are at "great risk" during a campaign against DAESH fighters by the Iraqi army backed by militias, said U.N. spokesman Stephane Dujarric. "One of the problems is that civilians are under grave danger as they try to flee," he said.

Even as Iraq slowly claws back territory from DAESH, faith in the government is crumbling among many, particularly the country's Shiites, angered by political disarray and the continual pounding of the capital, Baghdad, by militants' bombings. Prime Minister Haider al-Abadi triumphantly announced the beginning of operations to retake the DAESH-held city Fallujah, promising over the weekend that "the Iraqi flag will rise high" once more over the city. But in Baghdad, many residents are still reeling from a stunning barrage of suicide attacks the previous week that hit crowded markets, checkpoints a restaurant, a cafe and a gas plant killing more than 200 people, largely in Shiite areas. Rather than sow fear, the attacks seemed to stoke anger, particularly at the political elite. Hundreds of protesters, including families of victims from the bombings, stormed Baghdad's fortified Green Zone on Friday, demanding better security and government reform. Iraqi forces fired tear gas and live ammunition on the crowds, and the violence left two protesters dead and a number of military personnel wounded in knife attacks. It was the second time in a month that protesters have broken into the zone, where the government is headquartered. The rising tempers are spilling over into potentially dangerous divisions among Iraq's powerful Shiite militias. The two protests inside the Green Zone were dominated by followers of influential cleric Muqtada al-Sadr, who has led a campaign of anti-government protests, initially demanding government reform, but now also calling for accountability in light of security breaches that allowed DAESH to carry out the wave of recent attacks. "Woe to the government that kills her own children in cold blood," al-Sadr said in a statement following Friday's clashes. Al-Sadr's shows of force have also prompted rival militias to deploy in the streets, with each side vowing to protect Iraqis. That has raised fears of frictions or outright violence between the various camps.

Divisions among Shiite militias reflect splits among the parties backing them that have gone on for months. Iraq's political leadership has seemed increasingly paralyzed. Al-Abadi's government has been promising reforms to reduce rampant corruption for months but has not come through with them. Parliament has been unable to convene as many lawmakers are refusing to meet, citing security concerns. Visiting a Shiite shrine to pray for her family's safety, Iktisam Adeeb said the bombings show how the leadership is corrupt and the security forces ineffective. "Our politicians are just like puppets and someone else is pulling the strings," she said at the Sayyed Idriss shrine, one of several such holy sites in Baghdad revered by Shiites. Days after she spoke, a rocket hit the shrine complex, damaging an administrative building. Shiite militias are increasingly stepping in to provide security they accuse the police and army of failing to bring. After some of the deadliest bombings hit in Sadr City, the large Shiite district in Baghdad that is a stronghold of al-Sadr, the cleric's militia fanned out in the streets of the district. "There is no confidence in the security forces," said one commander of Saraya al-Salam, or the Peace Brigades, as al-Sadr's militia is called. He spoke on condition of anonymity as he was not authorized to talk to the media.
RELATED TOPICS