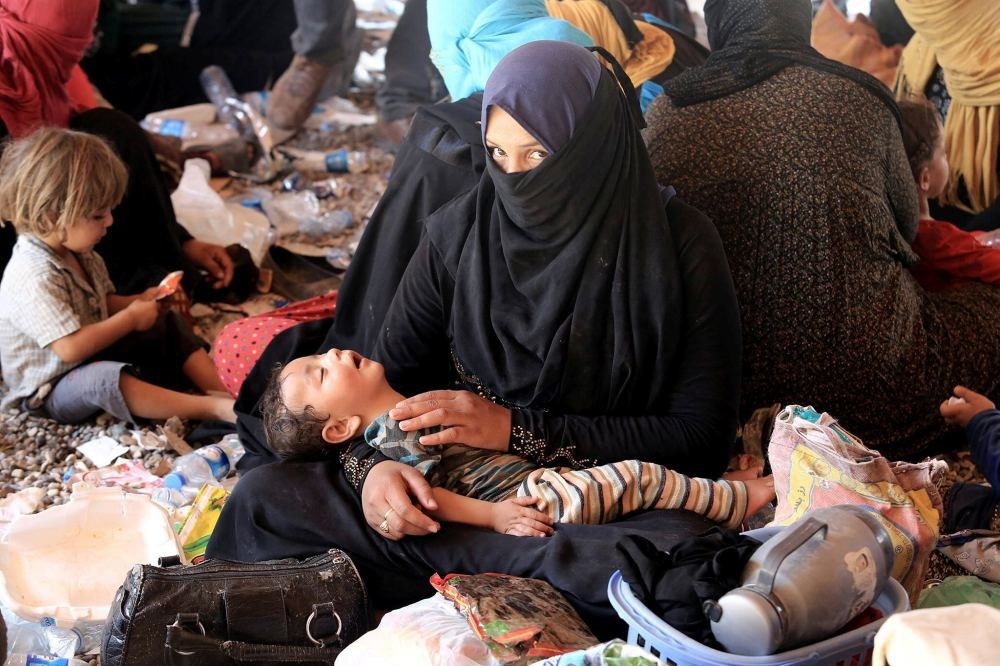 A displaced woman and child, who fled al-Shirqat due to DAESH violence.
by Compiled from Wire Services Aug 01, 2016 12:00 am

Iraqi forces are preparing for an assault on DAESH-held Mosul, but rights groups have warned that the Iran-backed Shiite militias, which have repeatedly been accused of murdering and torturing Sunni civilians, could increase sectarian hatred

It promises to be the biggest and perhaps last major battle against DAESH in Iraq. Iraq's government is setting its sight on Mosul, Iraq's second largest city that has been under DAESH control since June 2014, as its next major target in the fight against DAESH. The assault is likely months away, but fierce fighting has already been raging as Iraqi forces try to clear the militants from villages and towns south of the city. The goal is to protect the Qayara air base, which was recaptured from the militants on July 9 and is to be a main hub for the final move on Mosul. Some 560 American military personnel, mainly engineers and logistics, security and communications experts, are due to deploy at the base to upgrade its facilities to prepare for the Mosul attacks, according to U.S. Defense Secretary Ash Carter. But that can't happen yet because Qayara base has come under frequent rocket fire from DAESH fighters in the area. Around two-thirds of the surrounding towns and villages are controlled by DAESH militants. Iraqi forces need to clear a 20-kilometer radius around the base and to retake the key nearby towns of Qayara and Shirqat, several Iraqi military officials told The Associated Press. Iraqi forces already have driven the DAESH out of the cities of Ramadi, Fallujah, Tikrit and Beiji west and north of the Iraqi capital, rolling back the militants' dramatic blitz in the summer of 2014 that captured nearly a third of the country and linked with their territory in neighboring Syria.

Retaking Mosul would be far more significant, robbing the DAESH of the jewel of its self-declared caliphate. While the Syrian city of Raqqa is considered the caliphate's de facto capital, Mosul is the largest city under its control, with a current population estimated at between 500,000 and 1 million. DAESH militants in Mosul, meanwhile, vary from a few thousand to "not more than 10,000," according to the coalition. But the presence of hundreds of thousands of civilians in Mosul raises the prospect of a flood of people escaping, joining tens of thousands still displaced from previous fighting. The Geneva-based International Committee of the Red Cross said on Friday that up to 1 million Iraqis could be forced to flee their homes in the coming weeks amid worsening fighting. The group's regional director for the Near and Middle East, Robert Mardini, said it is preparing for the worst, particularly in the Mosul area. Already, a glimpse of the possible humanitarian crisis has emerged. Nearly 4,000 families have already fled their homes to escape ongoing fighting around the towns of Qayara and Shirqat. The government plans to house them in the town of Beiji to the south.

Iraqi military commanders should prevent militias with records of serious abuses from taking part in a planned offensive on DAESH-held city of Mosul, campaign group Human Rights Watch said on Sunday. The battle for Mosul, the ultra-hardline militants' de facto capital in Iraq and the largest city anywhere in their self-proclaimed caliphate, is expected later this year but plans have not been finalized, officials and diplomats in Baghdad say. Army, police and counter-terrorism forces are expected to participate, backed by air support from a U.S.-led coalition. The role of Kurdish peshmerga forces and Shiite militias from the Popular Mobilization Forces (PMF) is unresolved and remains a point of contention. They will likely join in the larger battle but may be restricted to the city's outskirts, the officials say. "Iraqi commanders shouldn't risk exposing Mosul civilians to serious harm by militias with a record of recent abuse," said Joe Stork, deputy Middle East director at Human Rights Watch, echoing the positions of many Western diplomats and aid workers who are mobilizing humanitarian aid for the population. Shiite militias and peshmerga fighters have been key forces in Iraq's campaign to retake the third of the country seized by DAESH in 2014 after army and police units collapsed, but they have also been accused of abuses against civilians, allegations they deny or dismiss as isolated cases. Their participation in the battle for Mosul, a predominately Sunni Arab city which also has diverse ethnic and sectarian communities, risks confrontation with the local population.
RELATED TOPICS