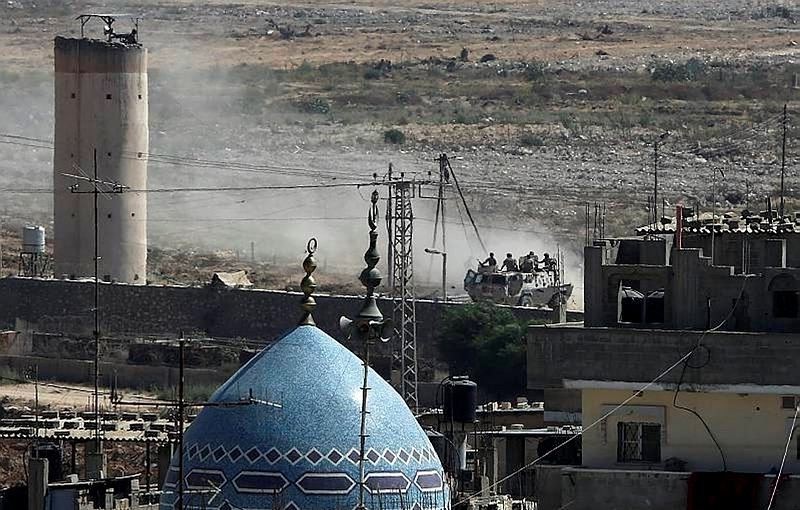 An Egyptian military vehicle patrols on Egypt's side of the border with southern Gaza Strip, near Rafah in the Gaza Strip, 02 July 2015 (EPA Photo)
by Associated Press Aug 03, 2016 12:00 am

A video purportedly by Egypt's Daesh affiliate has delivered a rare direct threat to Israel, saying the Jewish state will soon "pay a high price."

Egypt's branch of the Daesh group is spearheading an insurgency in northern Sinai that had simmered for years but grew stronger and deadlier after the military's 2013 ouster of Mohammed Morsi, Egypt's first democratically elected president.

The narrator of the 35-minute video released this week threatens Israel's Jewish population, saying "your account with us has become weighty and you will soon pay a high price." The authenticity of the footage could not immediately be verified, though its contents and production style mirrored previous Daesh propaganda material.

Daesh, which controls large swaths of territory in Iraq and Syria, seldom mentions Israel in its propaganda material. When it has done so it has often been in the wake of battlefield setbacks, apparently to boost the morale of its fighters and supporters.

Daesh has over the past year lost a string of cities it had captured in Iraq and is now bracing for an assault by U.S.-backed government troops and allied militiamen on Mosul, the country's second largest city, which has been under Daesh control since 2014. In neighboring Syria, the terrorist group is coming under growing pressure, and is fighting on multiple fronts against the Russian-backed Syrian army and its allies, as well as U.S.-backed opposition fighters.

The video also included footage depicting the killing with a single bullet to the head of two Egyptian policemen in Sinai.

Military officials with firsthand knowledge of the fighting in Sinai said the latest Daesh video was a little more than a compilation of old footage depicting attacks on the Egyptian army and police in Sinai. However, the video, which shows roadside bomb attacks, gun battles and sniper fire, offers a glimpse of the scale of fighting there.

Egyptian authorities have all but banned media access to northern Sinai, with the local press relying almost entirely on statements put out by the army and police, briefly reporting on their casualties. Meanwhile, an anti-terrorism law passed last year places severe restrictions on media coverage of anti-government activity, with heavy fines and up to five years imprisonment prescribed for publishing news that contradicts official statements or the perceived promotion of terrorists' causes.

The latest Daesh video, entitled "Flames of the Desert," shows the faces of Daesh fighters killed by Egyptian troops. The military officials say the militant group edited out the fierce counter-attacks launched by the military following militant attacks.

One example, they said, was the part of the footage showing militants firing at an Apache gunship while triumphantly screaming Allahu Akbar, or God is great. The aircraft was not hit, and later gunned down and killed most of the militants, added the officials, who spoke on condition of anonymity in line with regulations.

The video showed militants riding a tank they purportedly captured from army troops, some of them wearing ski masks, camouflage fatigues and armed with machine guns mounted on pickup trucks, mortars and what appeared to be Russian-made, anti-tank Kornet missiles.