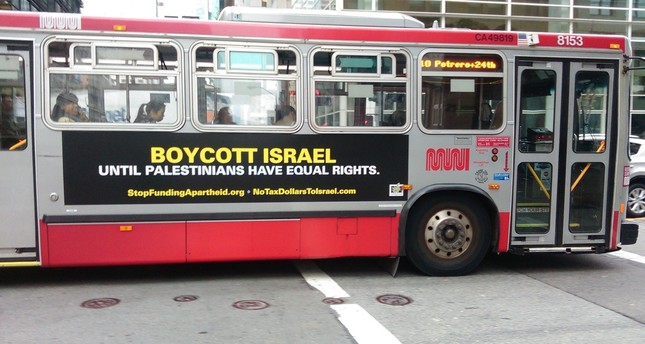 The Seattle Mideast Awareness Campaign (SeaMAC) has launched a new ad campaign on its buses in San Francisco, urging everyone to boycott Israel for its apartheid policies and untoward treatment to Palestinians.

The ad campaign which will run through the whole month of August is centered around the slogan "Boycott Israel Until Palestinians Have Equal Rights".

Modeled on the boycott campaign against apartheid in South Africa, SeaMac's new ad aims to draw attention to inequalities not only in West Bank but also inside Israel itself.

SeaMAC also lists other previous boycotts for social justice, including the British tea boycott in 1773, the South African apartheid from 1959 to 1994 and the 1980 Summer Olympics boycott to protest the Soviet invasion of Afghanistan.

The campaign also strongly criticizes the U.S. for its government support for "Israel's violations of Palestinian human rights", pointing out that the U.S. provides over $3 billion in military aid to Israel annually.

Stating that the Israeli government and its U.S. lobby are seeking to take away their right to boycott, SEAMAC called on the international arena to put an end to Israel's war crimes, apartheid, and ethnic cleansing of Palestinians.

Carla Curio, a volunteer board member of SeaMAC said: "The government of Israel is frightened enough to spend millions of dollars on false and defamatory PR and propaganda, desperately trying to bully people away from taking citizen action against Israel's apartheid and ongoing war crimes," news website Mondoweiss reported.

SeaMAC also ran this campaign on buses in Washington, D.C., San Francisco, Denver, and Portland OR in 2015, despite being taken down and censored in Chicago and Seattle.

Seattle Mideast Awareness Campaign is an all-volunteer and non-profit corporation in Washington.

Boycotts against Israel have been on the rise with the most recent being Friday at the Rio de Janeiro Olympics when Islam El Shehaby of Egypt refused to shake hands with his winning opponent, Or Sasson of Israel.

Earlier in the tournament, the Lebanese Olympic team had also refused to share a bus with the Israeli team.

"Because you do not normalise with apartheid regimes, you boycott them. Gold medal for Lebanon. #BDS #BoycottIsrael," Diab Abou Jahjah, the founder of the Arab European League, had tweeted Monday after the incident.

Palestinians want to establish their independent state in the West Bank, Gaza and East Jerusalem, areas which Israel illegally annexed in the 1967 Middle East War.

About 350,000 Palestinians currently live in East Jerusalem and 2.7 million in West Bank.

Israel's policies in the West Bank and Gaza Strip amount to apartheid due to its systematic oppression of the Palestinian people and de facto expropriation of their land, United Nations has said in many reports.

The Israeli army has also been under international fire for carrying out sweeping arrest campaigns in the occupied West Bank and East Jerusalem that ostensibly target Palestinians "wanted" by the Israeli occupation authorities.

Currently, over 7,000 Palestinians are languishing in Israeli prisons, according to the Palestinian Ministry of Prisoners' Affairs.