Iran parliament pushes back on military for Russian base use 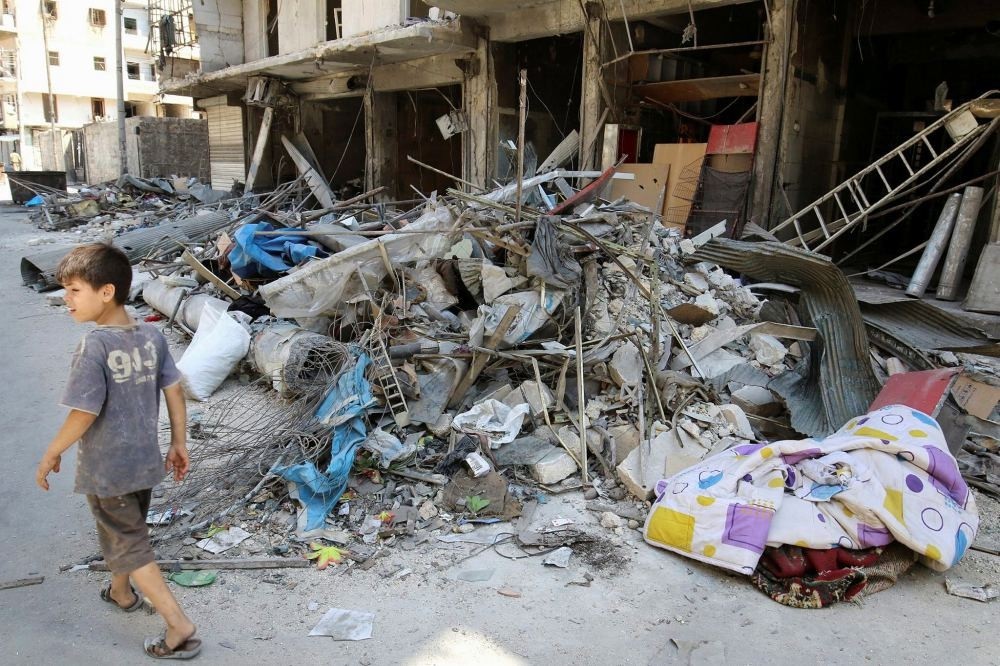 A boy walks past damaged shops in the opposition-held part of Aleppo, frequently targeted by Russia.
by Compiled from Wire Services Aug 24, 2016 12:00 am

The use of military bases by Russia to target opposition in Syria has divided Iran as the parliament has accused the defense ministry of not giving proper and clear information. The lawmakers remain dubious about Russia's intentions

Iran's parliament on Tuesday pushed back against the military over it dismissing civilian oversight following Russia's use of an Iranian air base to launch airstrikes on Syria. The rare parliamentary response is part of the larger give-and-take between civilians and the country's powerful security services since Iran's 1979 Islamic Revolution. It also highlights the public unpopularity of allowing Russia to use the air base, which marked the first time since the revolution that a foreign military has used Iran as a staging ground. Parliament Speaker Ali Larijani brought up the topic Tuesday as lawmakers gathered in Tehran for the body's opening session, a day after Iranian officials announced Russia's use of the Shahid Nojeh Air Base has stopped for the time being. The state-run IRNA news agency quoted Larijani as criticizing Iranian Defense Minister Gen. Hossein Dehghan for not "speaking properly" to lawmakers' concerns. Dehghan over the weekend said Russia's use of the air base was not their concern, though parliament has oversight of all government ministries. Dehghan "should have observed the ethics of governing," Larijani said. Larijani added that the mission wouldn't have needed prior parliamentary permission as it was "temporary and only for refueling." Three other semi-official news agencies quoted Larijani as saying the Russian flights from the air base, located about 50 kilometers (31 miles) north of the city of Hamedan, "have not stopped." IRNA did not report the remark.

Comments by Iranian officials since Russia announced using the base last week suggest Moscow and Tehran initially agreed to keep Russian use of the air base quiet. Both Iran and Russia support embattled Assad. Russian warplanes bombed Aleppo at Iran's request to assist its military advisors on the ground in the flashpoint Syrian city, a senior Iranian official said on Tuesday. Ali Shamkhani, the top official coordinating security and political affairs between Tehran and its allies, Moscow and Damascus, was quoted by state television saying Iran called in Russian strikes "next to the land operation" in Aleppo. "Iran has brought the powerful Russia along... due to its need to cooperate with Syria" in the fight against militants, added Shamkhani.

Russia surprised the international community last week when it announced that its warplanes had flown out of Iran's Hamedan base to conduct strikes against targets in Syria. That announcement prompted Iranian defence minister General Hossein Dehghan to criticize Russia's 'showing off and inconsiderate attitude'. An Iranian foreign ministry spokesman on Monday denied any differences with Russia over the use of Hamedan, adding that Russian raids from Iranian territory had ended for now. "These planes did not leave (Monday) but on Thursday, in accordance with the land operations and not under pressure from any other country," Shamkhani said on state television. It is illegal under Iran's constitution to give military bases to foreign armies. "The coalition among Iran, Syria and Russia to fight terrorism exists," Shamkhani added.

The war in Syria has increased tensions between regional powers, especially Iran and Saudi Arabia as the two countries are at proxy war. A semi-official news agency in Iran is reporting that Tehran's City Council has voted to rename a street near the Saudi Embassy for a Shiite cleric executed by the Sunni-ruled kingdom in January. The ISNA news agency says the council voted unanimously Tuesday to rename the Naaz Street after Sheikh Nimr al-Nimr. Saudi Arabia executed al-Nimr, a prominent Shiite cleric and dissident, in January, along with 46 other prisoners. His execution sparked protests in Iran that saw demonstrators storm the Saudi Embassy in Tehran and another diplomatic post in the country.
RELATED TOPICS