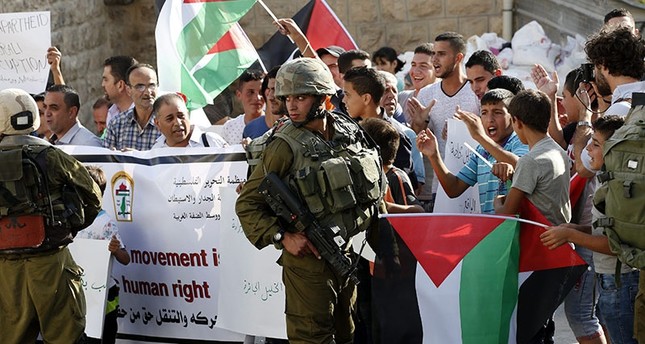 Israeli soldiers stand guard as Palestinians hold thier national flag during a protest against Israel’s increasing raids in the West Bank city of Hebron, Aug. 24, 2016.

Israeli authorities have shut down a Palestinian radio station in the Israeli-occupied West Bank over "incitement" to violence, the army said Wednesday, the latest in a series of such raids.

The overnight operation in Dura near Hebron led to five arrests, according to the Israeli army.

Palestinian police confirmed the detentions and said one of those held was the director of the Al-Sanabel station.

According to Palestinian police, the station's door was broken during the raid and a notice was given saying it was ordered closed for three months.

An Israeli army spokeswoman could not provide examples of the type of content that led to the raid.

"The radio station has repeatedly broadcast inciting content encouraging, celebrating and promoting violence and terrorism against Israelis," she said.

Israeli authorities have closed at least four Palestinian radio or TV stations since a wave of violence erupted in October.

The violence has killed more than 200 Palestinians so far.

Some of them were shot dead by Israeli forces during protests and clashes, while some were killed in Israeli air strikes in the Gaza Strip.

Much of the violence has occurred in the Hebron area in the southern West Bank, a flashpoint in the Israeli-Palestinian conflict.

Analysts say Palestinian frustration with Israeli occupation and settlement-building in the West Bank, the complete lack of progress in peace efforts have fed the unrest.

Share on Facebook Share on Twitter
Previous in MidEast One of the longest-serving officials and the 'spokesman' of the Daesh... Next in MidEast Moscow's claim that Russian air strikes in Syria had killed prominent...
DAILY SABAH RECOMMENDS