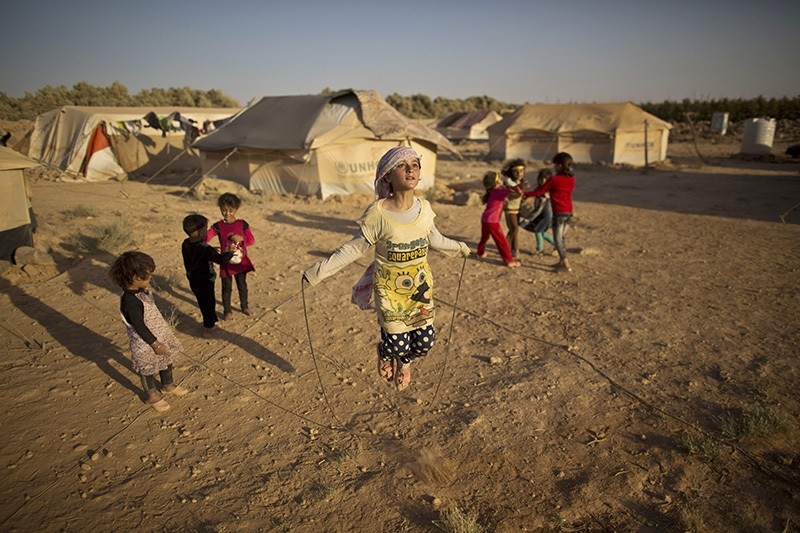 Syrian refugee girl, Zubaida Faisal, 10, skips a rope while she and other children play near their tents at an informal tented settlement near the Syrian border on the outskirts of Mafraq, Jordan, July 19, 2016. (AP Photo)
by Sep 07, 2016 12:00 am

Almost 50 million children throughout the world are "uprooted," forcibly displaced from their home countries by war, violence or persecution, the United Nations children's program said Wednesday.

"Indelible images of individual children - Aylan Kurdi's small body washed up on a beach after drowning at sea or Omran Daqneesh's stunned and bloody face as he sat in an ambulance after his home was destroyed - have shocked the world," United Nations International Children's Emergency Fund Executive Director Anthony Lake said in a statement.

"But each picture, each girl or boy, represents many millions of children in danger -- and this demands that our compassion for the individual children we see be matched with action for all children."

In its analysis of global data, UNICEF found that 28 million of those children were displaced by violence and conflict, including 10 million child refugees. 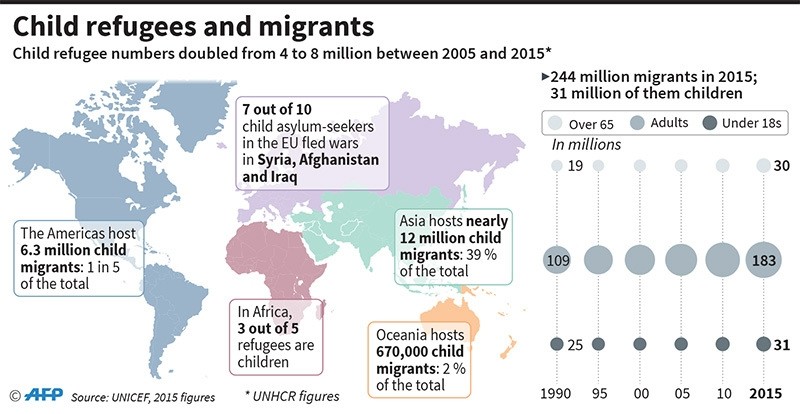 There were also one million asylum seekers whose refugee status is pending and approximately 17 million children displaced within their own countries lacking access to humanitarian aid and critical services.

Some 20 million other children have left their homes for various reasons including gang violence or extreme poverty.

"Many are at particular risk of abuse and detention because they have no documentation, have uncertain legal status, and there is no systematic tracking and monitoring of their well-being - children falling through the cracks," UNICEF said.

Children are also increasingly crossing borders on their own: more than 100,000 unaccompanied minors applied for asylum in 78 countries last year, tripling 2014's numbers.

UNICEF pointed to children accounting for a "disproportionate and growing proportion" of people seeking refuge outside their birth countries.

Children make up about a third of the world's population but about half of all refugees.

In 2015, about 45 percent of child refugees under the UN refugee agency's care came from Syria and Afghanistan.

The international body will take up the issue of migration in two late-September meetings on the sidelines of this year's UN General Assembly.

"The burden sharing of this crisis is not fair: the greatest burden is supported by neighboring countries or the poorest countries."

Forsyth said the upcoming summits are "not enough to solve the problem," but they remain "critical."

"It is a chance to get the world to look at this crisis," he said.