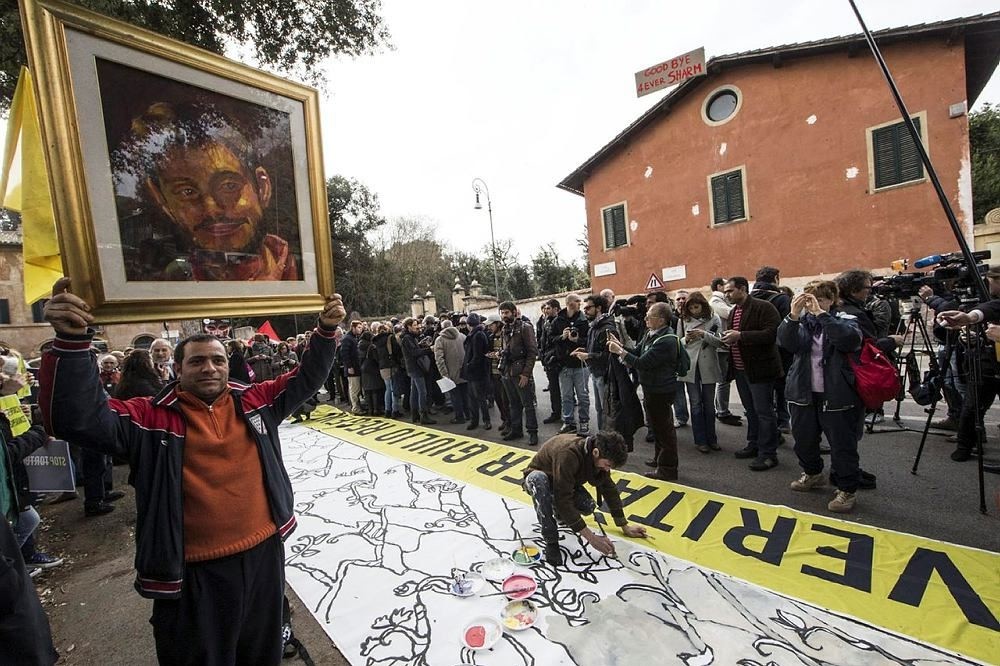 A man holds up a portrait of Giulio Regeni, the Italian student slained in Cairo, as several dozen people stage a sit-in outside Egypt's embassy in Rome. (AP Photo)
by French Press Agency - AFP Sep 09, 2016 12:00 am

Egyptian police investigated Italian student Giulio Regeni days before his abduction, torture and murder but dropped the probe after assessing he posed no threat, Egyptian and Italian prosecutors said Friday.

His body was later found by the side of a road bearing signs of brutal torture.

Egypt has denied that its security forces were involved, but Italy recalled its ambassador to Cairo in April in protest at what it said was a lack of progress in the investigation.

The state prosecutor met his counterpart in Rome this week to further the investigation.

In a joint statement, the two prosecutors said Regeni, who was researching Egyptian street vendor trade unions, had been under investigation for three days by Egyptian police in January.

"The Egyptian state prosecutor pointed to information that the head of the street vendor union passed on specific information about the Italian student to Cairo police," the statement said.

"Police probed his activities for three days that concluded that his activities were of no concern to national security, and based on that dropped the investigation."

This is the first official Egyptian acknowledgement that Regeni had been on the radar of security services.

Police officials had at first suggested Regeni might have died in a road accident, and have since offered little information on their investigation.

An Italian autopsy showed that his body was covered with cuts and his bones were broken, indicating he was hit with "fists, batons and hammers".

A letter "X" was carved on his forehead and hand, according to the report cited by Italian media.

His parents, Paola and Claudio Regeni, said the report suggested he had been tortured by a "professional".

"It seems clear to us that the torture inflicted, and the number of times our son had to endure it and the methods, can only be the perverse deed of some torture professional," they told Italian media on Wednesday.

In March, police linked a gang that it said extorted foreigners to Regeni's death, saying his belongings had been found in the home of the gang leader's wife.

He and four others were killed in a shootout with police.

The Egyptian and Rome prosecution would also continue trying to retrieve footage from CCTV cameras in a metro station that Regeni is believed to have entered before being abducted.

Egypt had said the programme to retrieve the deleted footage was very expensive, and had asked Italy to help.

It had also accused the Italian prosecution of "unconstitutionally" demanding thousands of phone records which it refused to provide.