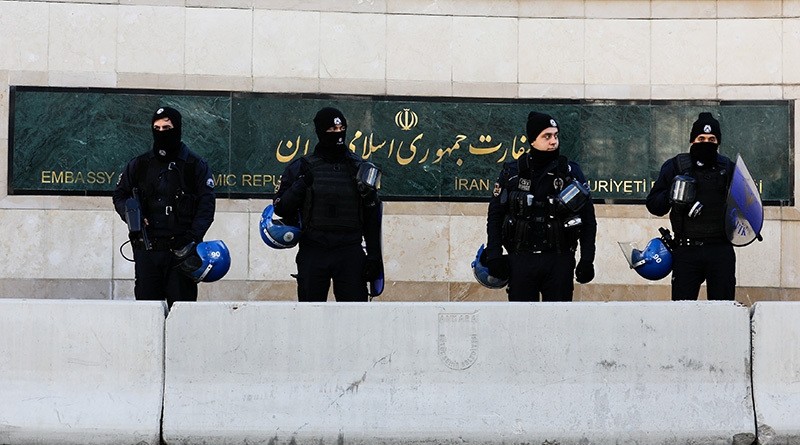 Iran has played a pivotal role in Assad regime's campaign to crush opposition resistance in Aleppo and is now close to establishing a "Shiite crescent" of regional influence stretching from the Afghan border to the Mediterranean Sea.

Revolutionary Guards commanders and senior clerics in Tehran have this week praised Iran's defeat of "Wahhabi terrorists" in Syria and the country they characterize as the opposition's patron is Sunni Muslim regional rival Saudi Arabia.

There is little doubt the capture of Aleppo after years of fighting, and at the cost of thousands of lives, will make Assad unassailable to the opposition who has sought to end his rule. It is unlikely such a victory would have been possible without Iran's steadfast supply of Shiite fighters, money and weapons.

The central role the Shiite majority nation has played - and the power it wields - was starkly illustrated on Wednesday when the evacuation of rebel-held districts was delayed after Tehran was said by opposition officials to have imposed new conditions.

Iran demanded a simultaneous evacuation of the wounded from two towns besieged by insurgents, according to rebel and U.N. sources.

The civil war has pitted Assad, supported by Russia and Iran, against opposition groups backed by the United States, Gulf Arab powers and Turkey.

Iran's involvement over more than five years - first by providing military advisers and then by training and arming Shiite militia - has not only helped shape the Syrian conflict, it has strengthened its own hand across the region.

For the first time, Tehran could exert authority over a vast sweep of the Middle East extending through Iraq and Syria into Lebanon - an arc of influence that Sunni Arab powers, particularly Saudi Arabia, have been warning about for years.

"We know the Iranians are very patient," said Hilal Khashan, a professor of political studies at the American University of Beirut. "They do not expect immediate rewards. So they persevered and they are reaping the fruits of their patience."

"There is no doubt in my mind that this Shiite arc or crescent will be created," he added. "The Iranians will establish their sphere of influence from Iraq through Lebanon."

That is not only because of the imminent fall of Aleppo but also because of the gains the Shiite-led government in Baghdad - a close ally of Tehran - has made in the battle to retake Mosul from Daesh terrorists, an ultra-hardline Sunni group.

Thousands of Shiite militia fighters trained by Iran are fighting on the side of the government in Iraq. Some have already fought in Syria to support Assad and pledged to go back if necessary.

In Iraq they are battling for control of Tal Afar, a city between Mosul and Iraq's western border with Syria which - if retaken - would allow Iran nearly unfettered military access all the way to the Mediterranean Sea.

Iran already has a great deal of influence in Lebanon, where it has deep historical ties with the Shiite community and funds Hezbollah, the country's most powerful political and military movement, which is also fighting in Syria on behalf of Assad.

Establishing such a "Shiite crescent" would give Tehran immense political clout in the region as it vies with arch-rival Riyadh and allow it to protect Shiite communities in these countries.

It would also present a military threat to Israel, through Syria and Lebanon, which Iranian officials regard as a deterrent to any Israeli aggression towards Iran.

For Saudi Arabia and other regional Sunni powers, increased Iranian power would come at cost to their own political, military and trading interests.

But whether Iran can maintain such a large sphere of influence is uncertain, Khashan said.

From as early as 2012 Iran began arming, training and paying thousands of Afghan and Pakistani fighters, as well as Hezbollah militants from Lebanon, to fight on behalf of Assad, according to diplomats and analysts.

Overseen by seasoned Iranian Revolutionary Guards commanders, some of whom have combat experience dating back to the Iran-Iraq war in the 1980s, these fighters were able to hinder many Syrian opposition advances.

Among those commanders is Qassem Soleimani, the head of the Revolutionary Guards' Quds Force - the arm responsible for operations outside Iran - who has been repeatedly photographed at frontline positions in Iraq and Syria in recent years.

The presence of Soleimani, as well as other senior Guard commanders, on the ground was completely different to the approach of countries like Saudi Arabia who only sent money and military equipment to the opposition, diplomats and analysts said.

"The Saudis have kit. They don't really have expertise. They provided kit. They provided money. That's what they thought would be enough and it wasn't," said a Western diplomat in the Middle East who asked not to be identified because he is not authorized to speak publicly.

"That's one thing the Iranians did that the other side didn't - invest capital on the ground."

Opposition fighters have said that when Iranian commanders were present on the ground the Syrian army performed much better, according to the Western diplomat.

That decision to keep senior Iranian commanders at the frontline came at a cost, with at least half a dozen Iranian generals killed in Syria. But by using Shiite militia fighters from other countries, Tehran was able to keep the total number of Iranians killed in Syria relatively low.

Analyst tallies of combat deaths in Syria indicate that hundreds of Iranian nationals likely fought there but it is not clear how many are in the country now.

In turn, the Revolutionary Guards and Iranian Supreme Leader Ayatollah Ali Khamenei were able to sell the war to the Iranian public.

Hardline news outlets close to the Guards have been printing stories about the existential threat posed by Daesh and the need to fight the group in Syria since Iran went public about its role in the conflict in 2012.

Earlier this year, Khamenei said that if Iran was not taking part in the war in Syria then they would be fighting the same enemy inside Iran.

At the Tehran book fair in May people could photograph themselves dressed up with a helmet and ammo belt against a backdrop of a bombed-out cityscape that resembled Aleppo.

"It's easier for the government to sell a war that isn't that popular or essential if it's not Iranian blood being spilled for the most part," said the Western diplomat. "By outsourcing it they've kept the pain away from most Iranians."