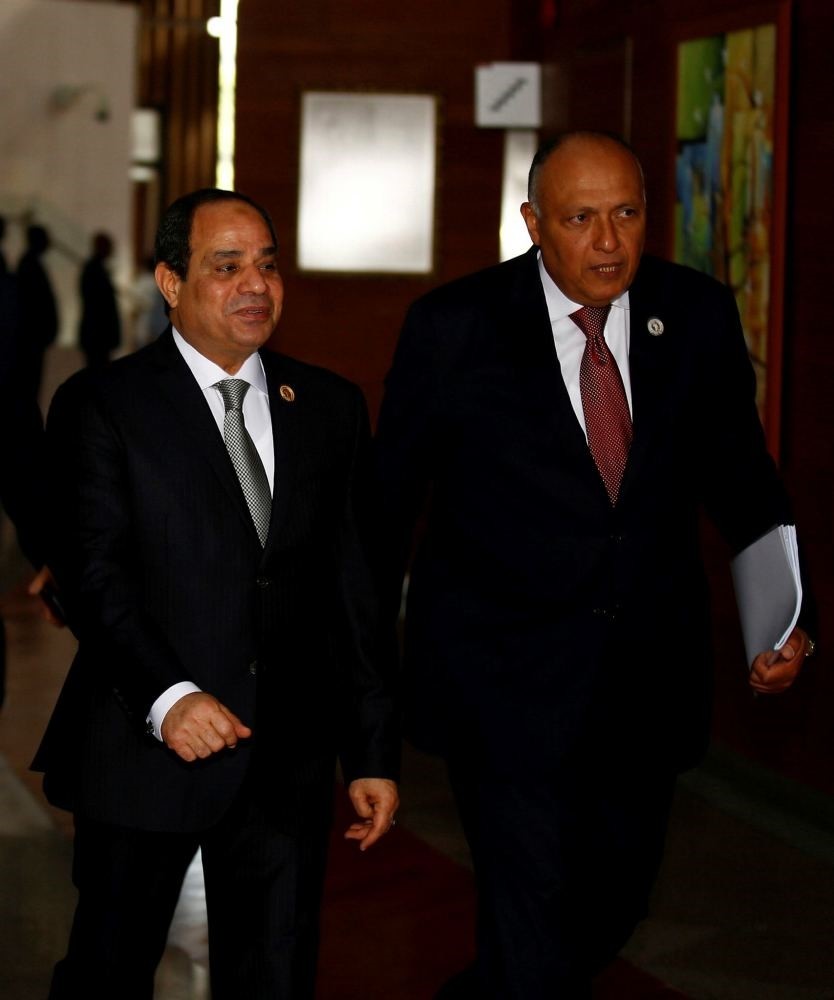 Egypt's President Abdel Fattah el-Sissi and his Foreign Minister Sameh Shukri arrive at the 28th Ordinary Session of the Assembly of the Heads of State and the Government of the African Union in Ethiopia's capital Addis Ababa, Jan. 31. (Reuters)
by Yusuf Selman İnanç Feb 04, 2017 12:00 am

When The first democratically elected Egyptian President Mohammad Morsi took power in 2012, Saudi Arabia was one of his ardent detractors while Iran was eager to better its strained relations with the biggest country in the Middle East. When incumbent President Abdel Fattah el-Sissi (seen left with his foreign minister) led a coup in 2013 to overthrow Morsi, Saudi Arabia was one of his main political and financial supporters while Iran was hesitant to support the coup. However, in a short time the two external actors' relations with Egypt drastically changed.

The increasing disputes with Saudi Arabia over the fate of two tiny islands in the Red Sea and Iran's struggle to expand its influence in the region have taken Egypt out of Riyadh's control and brought the country closer to Tehran. While Saudi Arabia has been financially suffering from the cost of its fight in Yemen against Iran-backed Houthi rebels, the kingdom has drastically reduced its financial support for Egypt with Riyadh having sent billions of U.S. dollars after the coup and promising to send more. Egypt has also been notified that the Free Oil Agreement, which was created to meet Egypt's demand for oil over the next five years due to the ongoing energy crisis, has been canceled.

The latest leaked phone records between el-Sissi and Egypt's Foreign Minister Sameh Shoukry have revealed Iran's support for Egypt's participation in Syrian talks amid the recent sending of military support from Cairo to Damascus under the pretext of fighting Daesh. Egypt's recent move belies the fact that the country has found itself in hot water with pro-Daesh groups in the Sinai region. According to a Middle East Eye report, "Another leaked recording is a discussion between Shoukry and el-Sissi regarding a key round of Syria peace talks hosted in the Swiss city of Lausanne in October 2016, suggesting that the U.S. actively opposed Egypt's involvement in the negotiations but had its hand forced by Iran, a major backer of Syria's Assad," Middle East Eye reported on Tuesday. Records also indicate that Cairo tries to preserve its good relations with the United Arab Emirates (UAE) which have helped the coup regime as much as Saudi Arabia. One of the recordings was related to the bomb attack on a Coptic Church last December that left 25 dead. In response to the attack, Cairo accused Qatar of harboring terrorists. Following the accusations, Golf Cooperation Council Secretary-General Abdullatif bin Rashid al-Zayani urged Egypt to confirm its allegations, saying that "Issuing hasty statements without confirming them affects the strength of relations between the GCC and the Arab Republic of Egypt," Zayani said in the statement. Shoukry, on the phone, accused Saudi Arabia of deteriorating relations. "The Saudis exploited it as a means of continuing the tension with us," Shoukry says.

It is not certain yet what direction Egyptian-Saudi relations will take but it is a fact that el-Sissi has been supporting the initial supporters, relying on new actors such as Iran. For instance, el-Sissi's reluctance to participate in the military operation in Yemen has been one the reasons for deteriorating relations with the Gulf States. His fruitless efforts in Libya has also caused more chaos and damaged internationally recognized government, creating more space for pro-Daesh groups to enter. Also, despite Turkey's intermittent signals to re-establish relations which were severed after the coup, el-Sissi's government has not responded positively. On the contrary, the Egyptian government has offered asylum for Fetullah Terror Cult (FETÖ) members who are responsible for the July 15 coup attempt to overthrow the government, allowing el-Sissi's failed and inaccurate policies to attract Iran. While Morsi was accused of establishing good relations with Iran, Egypt has been on the side of Iran in Syria's civil war as "Iran has historically considered only Egypt—an ancient civilization with a prominent role in Islamic history—its political and cultural match among the Middle East's Arab states. Egypt has largely been missing from the Middle East's strategic landscape for the past three decades, however, and its domestic problems mean that it will be tied up at home for years to come," according to Tarek Osman of Foreign Affairs last month. However, Egypt's internal problems and alliance with the U.S. have prevented furthering the relations. Both countries may consider the here-and-now as the best time for finding new means of cooperation.