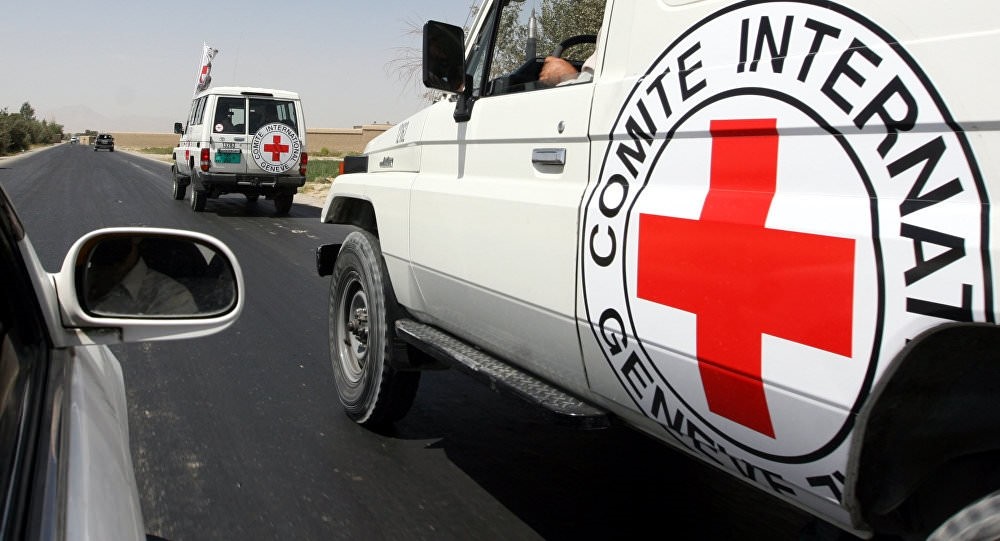 The International Committee of the Red Cross in Afghanistan is trying to secure the release of their staff members who were detained by a local armed group. (AP Photo)
by Compiled from Wire Services Feb 08, 2017 12:00 am

Two other Red Cross workers were missing following the ambush in the volatile province of Jowzjan, in one of the worst attacks on the international charity in the country for years.

Their convoy, comprising three drivers and five field officers, came under fire while they were carrying much-needed livestock materials to a remote area badly affected in recent days by heavy snowfall.

"This is a despicable act," said Monica Zanarelli, head of the International Committee of the Red Cross in Afghanistan.

"Nothing can justify the murder of our colleagues and dear friends."

"Daesh fighters are active in the area. We had previously repeatedly warned them not to go to such dangerous areas under Daesh control," he said.

Turkistani said the bodies of the six workers had been brought to a provincial hospital.

Some of the bodies had multiple bullet wounds and had been shot from close range in the head and chest, Fraidoon Habib, director of the hospital, told AFP.

Meanwhile elsewhere in Afghanistan, a suicide bomber detonated his payload after being stopped outside a district headquarters in the eastern Paktia province, killing two civilians and wounding a policeman, said Abdullah Asrat, the spokesman for the provincial governor.

No one claimed responsibility, but the Taliban frequently attack government targets.

The brazen attack comes at a time when Afghanistan is in urgent need of humanitarian aid, with more than 100 people killed in recent avalanches and tens of thousands displaced by the wrenching conflict.

Most recently, on Tuesday, a suicide bomber struck at the entrance to the Afghan Supreme Court in the capital, Kabul, killing at least 20 people and wounding more than 40.

ICRC president Peter Maurer denounced Wednesday's killings as a "huge tragedy", saying it appeared to be a deliberate attack on the charity's staff.

"These staff members were simply doing their duty, selflessly trying to help and support the local community," Maurer said.

The Taliban, who have been waging a 15-year insurgency in Afghanistan, denied involvement in the attack. Jowzjan is infested with insurgent groups and rife with armed struggles between competing pro-government militias.

The killings come after a Spanish employee of the ICRC was abducted on December 19 when workers from the charity were travelling between the northern city of Mazar-i-Sharif and the neighbouring volatile Taliban hotbed of Kunduz.

He was released nearly a month later, but ICRC and local officials did not say how he was freed or who was behind the abduction.

The ICRC, which has been operating in Afghanistan for decades, declined to say how the latest incident would impact them.

"At this point, it's premature for us to determine the impact of this appalling incident on our operations in Afghanistan," Zanarelli said.

"We want to collect ourselves as a team and support each other in processing this incomprehensible act and finding our two unaccounted for colleagues."

Aid workers in Afghanistan have increasingly become casualties of a surge in militant violence in recent years.

In April 2015 the bullet-riddled bodies of five Afghan workers for Save the Children were found after they were abducted in the strife-torn southern province of Uruzgan.

And in June that year nine Afghan employees of Czech aid organisation People in Need were shot dead in their beds during an overnight raid by gunmen in northern Balkh province.

"Humanitarian staff are neutral and impartial, and their lives must be protected -- not targeted," said Ana Locsin, Afghanistan country director for Save the Children, condemning the Red Cross killings.