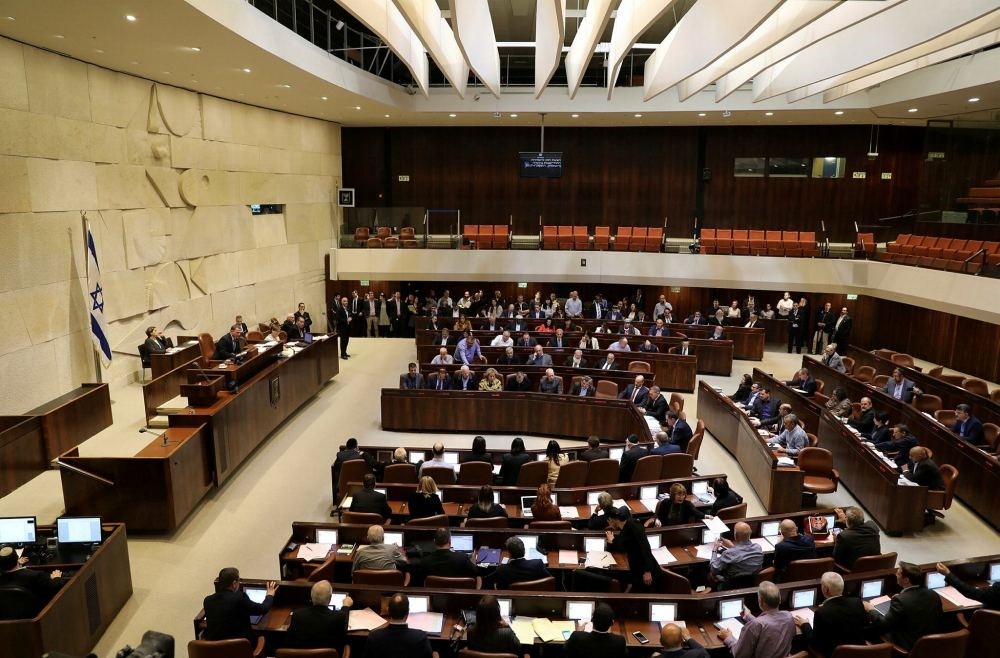 Israeli lawmakers attend a vote on a bill at the Knesset, the Israeli parliament, in Jerusalem Feb. 6.
by Compiled from Wire Services Feb 08, 2017 12:00 am

Marking the first time that the Israeli parliament has imposed Israeli law on Palestinian inhabitants of the West Bank, Israel approved a law legalizing thousands of settlement homes amid fierce international criticism

The Arab League accused Israel of "stealing the land" of Palestinians. "The law in question is only a cover for stealing the land and appropriating the property of Palestinians," said the head of the Cairo-based League, Ahmed Aboul Gheit. The law is a continuation of "Israeli policies aimed at eliminating any possibility of a two-state solution and the establishment of an independent Palestinian state," Gheit said.

The U.K. and France also condemned the Israeli bill legalizing settlements. A British Foreign Office minister for the Middle East, Tobias Ellwood, said in a statement: "As a longstanding friend of Israel, I condemn the passing of the Land Regularization Bill by the Knesset, which damages Israel's standing with its international partners."

Ellwood's comments came less than 24 hours after a meeting in London between Israel's Prime Minister Benjamin Netanyahu and British premier Theresa May.

Critics say the legislation enshrines into law the theft of Palestinian land. It also marked the first time that the Israeli parliament has imposed Israeli law on Palestinian inhabitants of the West Bank. The area, captured by Israel in 1967, is not sovereign Israeli territory and Palestinians there are not Israeli citizens and do not have the right to vote.

The explosive law, approved by lawmakers late on Monday, is the latest in a series of pro-settler steps taken by Israel's hard-line government since the election of Donald Trump as U.S. president. Since Trump took office last month, Israel has announced plans to build over 6,000 settler homes in the West Bank and east Jerusalem — occupied territories claimed by the Palestinians. After ignoring a string of Israeli announcements, the Trump White House last week finally said that settlements "may not be helpful" for peace. But after the law was passed late Monday, it said only that it would wait for Israel's courts to rule on the legislation before taking a stance.

According to the law, Palestinian landowners would be compensated either with money or alternative land, even if they did not agree to give up their property. Critics say the legislation enshrines into law the theft of Palestinian land, and it is expected to be challenged in Israel's Supreme Court.

The vote passed 60-52 in Israel's 120-member Knesset. The raucous debate saw opposition lawmakers shouting from their seats at governing coalition lawmakers speaking in favor of the vote. Some spectators in visitors' seats raised a black cloth in apparent protest.

Israeli Prime Minister Benjamin Netanyahu had voiced misgivings about the law in the lead-up to the vote, reportedly expressing concern that it could trigger international censure and saying he wanted to coordinate with the Trump administration before moving ahead on a vote.

He told reporters on a trip to London that he had updated Washington and was ready to move ahead with the law. Netanyahu was on his way back from the trip and was not present for the vote. Critics have also warned the bill could drag Israel into a legal battle at the International Criminal Court at The Hague, Netherlands, which is already pursuing a preliminary examination into settlements.
RELATED TOPICS