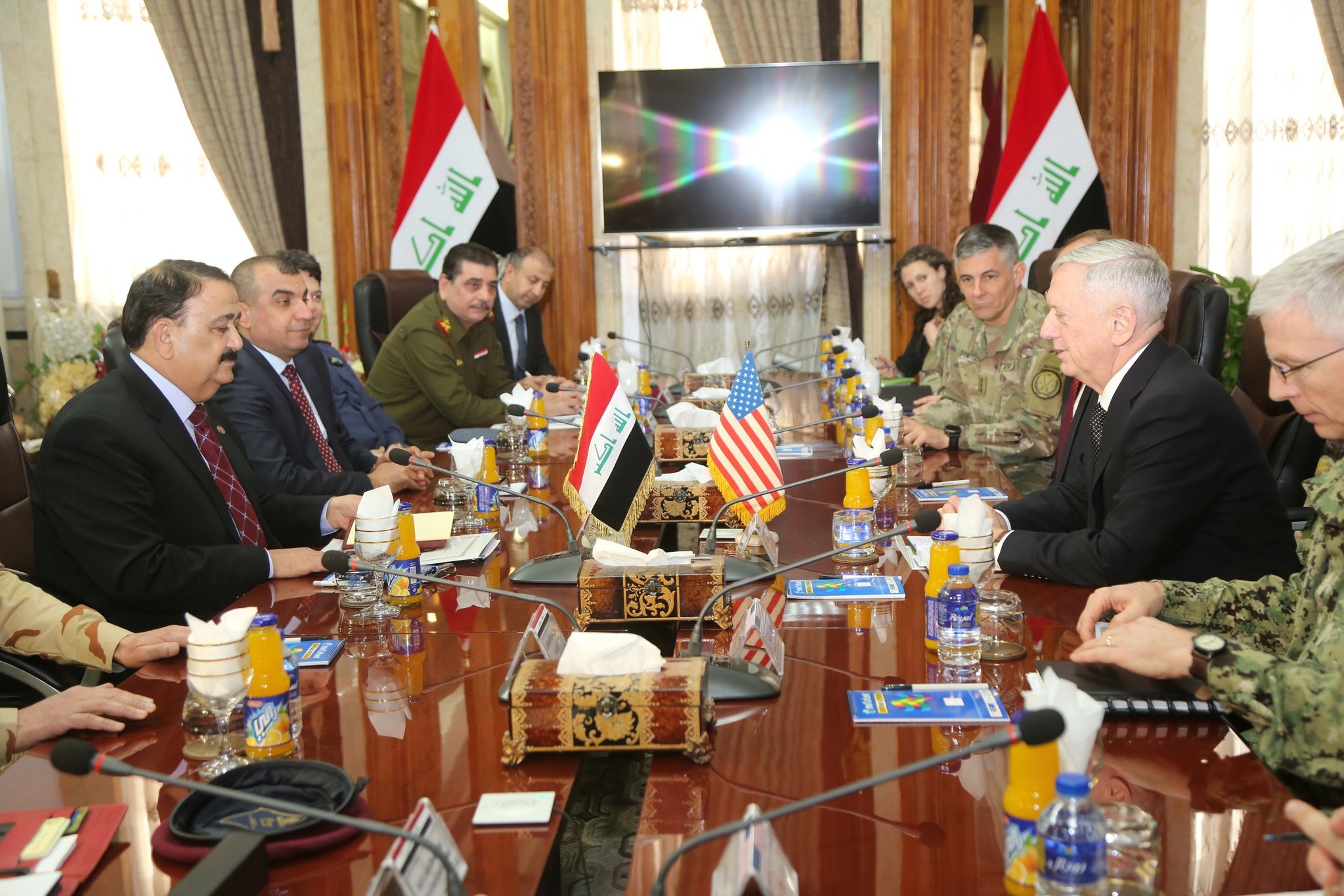 U.S. Defense Secretary Jim Mattis and Iraq's Defence Minister Erfan al-Hiyali meet at the Ministry of Defense in Baghdad, Iraq February 20, 2017. (REUTERS Photo)
by Feb 20, 2017 12:00 am
The U.S. military is not in Iraq "to seize anybody's oil", Defense Secretary Jim Mattis said, distancing himself from remarks by President Donald Trump at the start of a visit to Iraq on Monday.

Mattis, on his first trip to Iraq as Pentagon chief, is hoping to assess the war effort as U.S.-backed Iraqi forces launch a new push to evict Daesh militants from their remaining stronghold in the city of Mosul.

However, his remarks in Iraq were the latest example of his policy differences with Trump. Back in January, Trump said America should have seized Iraq's oil after toppling Saddam Hussein in 2003.

Trump told CIA staff: "We should have kept the oil. But okay. Maybe you'll have another chance."

Mattis, however, flatly ruled out any such intent. "We're not in Iraq to seize anybody's oil," he told reporters traveling with him.

Trump has acknowledged that Mattis did not agree with him about the usefulness of torture as an interrogation tactic but, in a sign of Mattis' influence, said he would defer the matter to his defense secretary.

Mattis has also been more critical than Trump of Russian President Vladimir Putin, and distanced himself from Trump's labeling of the media as "the enemy of the American people," saying he had no problems with the press.

A retired Marine general who led American troops in Iraq, Mattis has also sought an exemption from Trump's travel ban for Iraqis who served with U.S. troops, including translators.

He said he had not seen a new executive order which the administration is considering. "But I right now am assured that we will take steps to allow those who have fought alongside us, for example, to be allowed into the United States," Mattis said.

Mattis is finalizing plans at Trump's request to accelerate the defeat of Daesh and is expected to meet senior U.S. and Iraqi officials in Iraq.

His visit comes a day after Iraqi Prime Minister Haider al-Abadi announced the start of the ground offensive on western Mosul, where Daesh militants are essentially under siege along with an estimated 650,000 civilians.

The insurgents were forced out of the east of the city last month after 100 days of fighting.

The U.S. commander in Iraq, Army Lieutenant General Stephen Townsend, has said he believes U.S.-backed forces will recapture both of Daesh's major strongholds - Mosul and the city of Raqqa in Syria - within the next six months.

The defense secretary's strategy review could lead to additional deployment of U.S. forces, beyond the less than 6,000 American troops deployed to both Iraq and Syria today.

Experts say the Pentagon may also look at increasing the number of attack helicopters and air strikes and bringing in more artillery, as well as granting greater authority to battlefield commanders fighting Daesh.

The future for U.S. forces in Iraq, and for Iraq's fragmented society, is unclear once the group has been expelled from Mosul.

Mattis told the Senate last month that the top U.S. goal in Iraq should be "to ensure that it does not become a rump state of the regime in Tehran", which has close ties with the Shi'ite political elite ruling Iraq.

A power struggle appears to be taking root between Iraq's Shi'ite leaders. Influential cleric Moqtada al-Sadr, who is openly hostile to Washington's policies in the Middle East, has begun mobilizing supporters ahead of parliamentary and provincial elections.