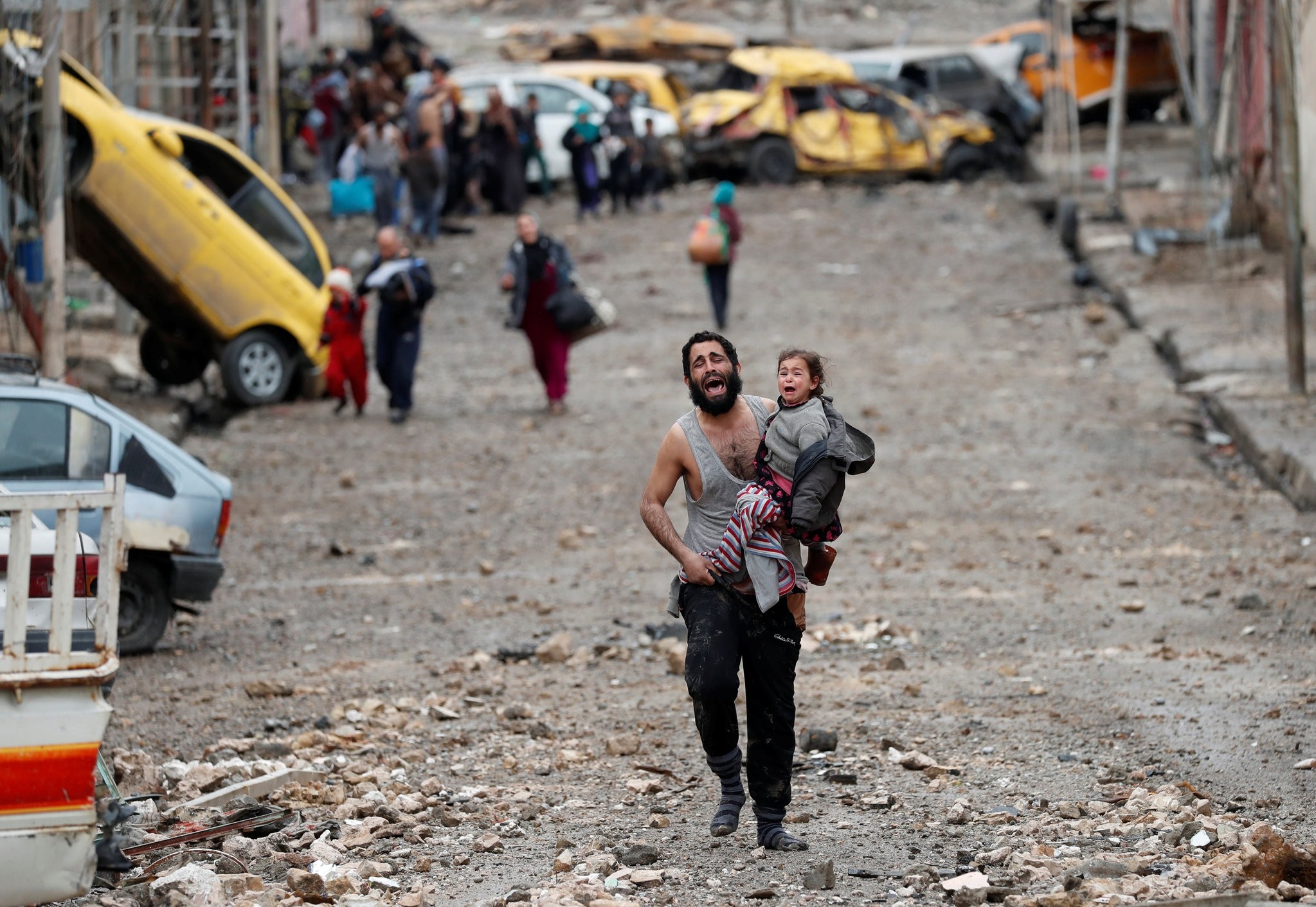 A man cries as he carries his daughter toward Iraqi Special Forces following a battle in Daesh-controlled Mosul, Iraq on Saturday, March 4.
by Yusuf Selman İnanç Mar 06, 2017 12:00 am

Even if the battle for Mosul results in a defeat for Daesh, Iran-backed Shiite militias, the PKK and Daesh's remnants will likely engage in a multi-party war

When Daesh captured Mosul back in 2014, the Iraqi government faced criticism for being unable to defend one of its largest cities. The oil-rich city fell to Daesh easily as the Iraqi troops avoided clash and fled posts, abandoning their weapons.

Today, several groups are cooperating on the ground, but primarily due to international pressure and the U.S. handling of military operations. Interestingly, they had exist during Mosul's fall too, as the Iraqi army unlike other regular armed forces, consisted of several armed groups with different ethnic and sectarian backgrounds and it is a known fact that these groups do not like each other.

The battle, however, will not probably end soon and its costs, especially the humanitarian one, will increase.

On average, some 4,000 civilians have fled the city every day and 176,000 people in total have been displaced since the Mosul offensive began, the United Nations said.

Meanwhile, thousands, trapped in the city, were suffering from food shortages and appealed for help as Daesh militants used them human shields. In a recent aerial attack on a mosque, dozens of civilians were reportedly killed.

The displacement, food shortages and civilian loss are all evidence to how difficult it can be, retaking the city. Regardless, the recapture of Mosul will likely deal a major blow on Daesh, who had found the opportunity to implement its rules and self-claimed caliphate in the region.In addition, it will lose human resources, as the group forcibly recruits people. U.S. Gen. Stephen Townsend said last week that the group has around 12,000 to 15,000 fighters inside the city. Secondly, its income will decrease sharply as Mosul provides a considerable amount through taxes. The group will also have to be content with small cities and desert. Besides its loss in Iraq, Turkey's Operation Euphrates Shield will continue to weaken the group.

However, it does not mean that an optimistic approach on the destruction of Daesh at this point would be valid as the group, through its global network, is likely to increase its terror attacks across the world. Meanwhile, an optimistic approach cannot be developed for post-battle Mosul as well, since the groups fighting Daesh at the moment will likely engage in battle with other groups.

For instance, before the operation to recapture Mosul began, Iran-backed Hashd al-Shaabi militias, who have been accused by several rights groups of committing atrocities against Sunni civilians elsewhere in Iraq, declared that they would kill all the Sunnis, claimed locals allied with Daesh.

Dozens of videos, captured in Mosul's outskirts have shown the brutality of the militias on unarmed people.

A 2015 Amnesty International report said, "Shiite militias have been abducting and killing Sunni civilian men in Baghdad and around the country. These militias, often armed and backed by the government of Iraq, continue to operate with varying degrees of cooperation from government forces, ranging from tacit consent to coordinated, or even joint, operations."

With the pressure, applied by Turkey, the militias were forced to remain behind and not to enter Mosul. Ironically, the Iraqi armed forces were also under the control of Iranian military advisers, despite the U.S.' leading role. This means, it cannot be ensured that Iraqi forces would not get involved in torture,

kidnapping, rape and other atrocities, which would be another nightmare for the ordinary Sunni citizens.

Besides the Shiite militias, the PKK has also increased its presence in the region, especially after the capture of Sinjar. According to unverified reports, at least 2,000 PKK militants were in Sinjar and some of them have somehow been involved in the Mosul operation.

Turkey, which aims to eliminate the terror group, is very concerned on the issue and backs the Hashd al-Nineveh group, which consists of Iraqi Arabs and Turkmens.

PKK's presence is a problem for the Kurdish Regional Government (KRG) too, as President Massoud Barzani's ultimate goal is to secure his power in Mosul, like he has done in Kirkuk.

On one hand, the U.S. seems to be acquired with working with Iran on the ground, as former President Barack Obama's policies provided the country with opportunities to exert influence over the region, especially in Iraq.

On the other hand, the new U.S. President Donald Trump's negative and harsh stance against Iran may lead to new crisis. The U.S. and Iran might engage in diplomatic wars over how to rule Mosul.

The Trump administration was unlikely to be happy with Shiite militia presence in Mosul, something insisted on by Iran.

The battle for Mosul may not last longer but ensuring stability and security in the city will be a lingering task. Many actors, with many proxies, will fight for their interests, heating up not only the situation on the ground but also in diplomatic missions. And, this may not be the last armed conflict the city and its people will see.
RELATED TOPICS