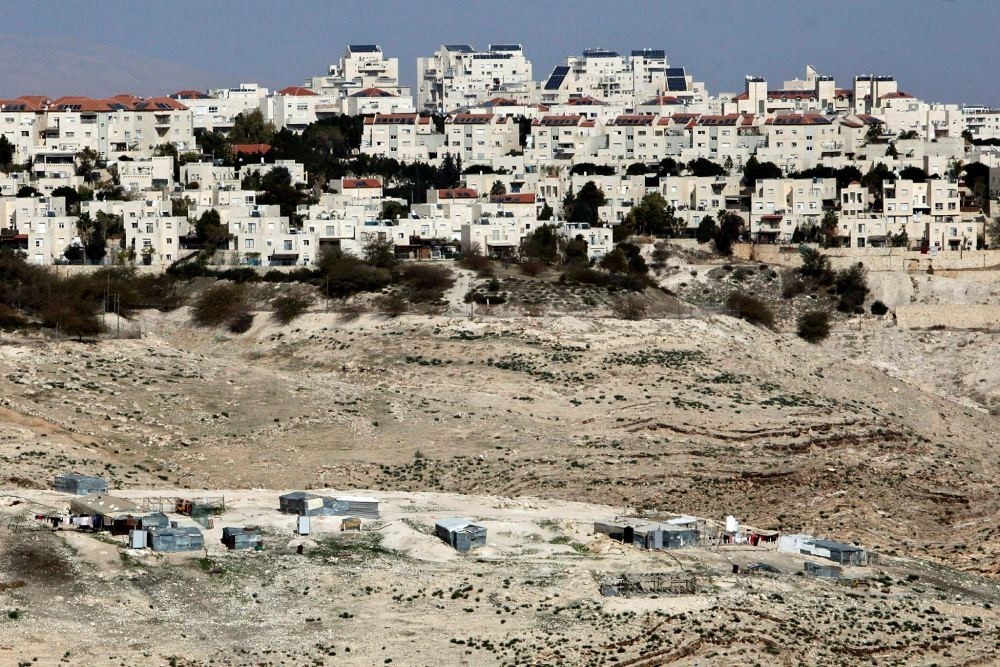 The Israeli settlement of Maaleh Adumim looms over Arab Bedouin shacks in the West Bank.
by Daily Sabah with Wires Apr 01, 2017 12:00 am

Amid growing international criticism, the Israeli security cabinet approved the first West Bank settlement in two decades as compensation for a settler outpost demolished in February

The Palestinians and the U.N. on Friday condemned the Israeli cabinet's approval of the first officially sanctioned new settlement in the occupied West Bank in more than 25 years.

The Israeli security cabinet gave its unanimous backing to the new settlement late on Thursday as what is widely seen as the most right-wing government in Israeli history presses ahead with settlement expansion in defiance of international concerns.

Turkey also condemned the Israeli decision in a statement released Friday. The Turkish Foreign Ministry described the move as "unacceptable" and said it violated Palestinians' rights, U.N. Security Council resolutions and the will of the international community. "We condemn the Israeli government's decision to establish a new settlement in the occupied Palestinian territories," it said.

Presidential spokesman İbrahim Kalın said in a press briefing on Friday that the new settlement plan is "an impediment to the [peace] process for both sides." "This is a step not contributing to regional peace. We urge Israel to take back this [settlement] plan," said Kalın.

A spokesman for U.N. chief Antonio Guterres, expressed "disappointment and alarm" at the announcement. "The secretary general has consistently stressed that there is no Plan B for Israelis and Palestinians to live together in peace and security. He condemns all unilateral actions that, like the present one, threaten peace and undermine the two-state solution," Stephane Dujarric said in a statement.

Senior Palestinian official Hanan Ashrawi said the move showed that the government was pushing ahead with "their systematic policies of colonialism, apartheid and ethnic cleansing, showing a total and blatant disregard for Palestinian human rights."

"Israel is more committed to appeasing its illegal settler population than to abiding by the requirements for stability and a just peace," she said.

Israeli media reported that Prime Minister Benjamin Netanyahu has ordered a slowdown of settlement construction as a gesture to U.S. President Donald Trump. Netanyahu told ministers to take Trump's position "into consideration" and said construction will be limited to settlement boundaries with no new outposts allowed. President Trump had indicated he would be more sympathetic to settlements than predecessor Barack Obama and the international community, who consider them illegal. However, he appears to have backpedaled since taking office.

The new settlement will be constructed north of the former wildcat Jewish outpost known as Amona, which was razed in February in accordance with an Israeli High Court order. Netanyahu had promised to build a new settlement for its residents after their eviction. "I promised to create a new community and we are going to respect that commitment and create it today," he said ahead of Thursday's security cabinet meeting.