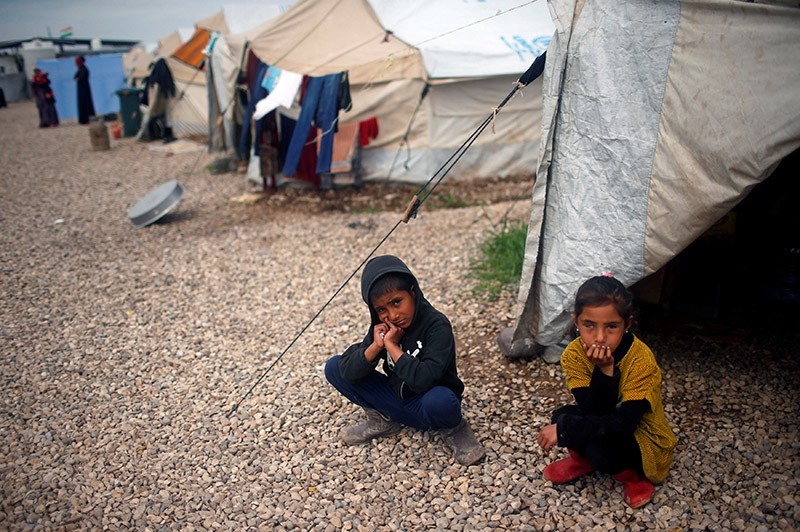 Displaced Iraqis sit outside their tent during the visit of United Nations Secretary General Antonio Guterres at Hasansham camp, in Khazer, Iraq March 31, 2017. (Reuters Photo)
by Apr 04, 2017 12:00 am

The United Nations said on Tuesday it was expanding camps for people fleeing Mosul, as air strikes resumed on Daesh positions in Iraq's second largest city.

More than 300,000 people have fled Mosul since the start of the U.S.-backed campaign in October, the office of the U.N. Humanitarian Coordinator in Iraq said in a statement.

Before the operation to drive Daesh from the city began, Mosul had a population of about a million and half, split about evenly between the areas east and west of the Tigris river that runs through the middle.

Iraqi forces captured the eastern side in January and in February launched a second phase to take the western side, with air and ground support from a U.S.-led coalition.

They are now battling to take the northwestern part, but the civilian death toll has mounted in the old city, where the militants are dug in amongst residents.

More people are expected to flee the fighting and camps for the displaced north and east of Mosul are expanding, the U.N. statement said.

Air strikes on the city by the Iraqi air force resumed on Tuesday as the sky cleared after several days of bad weather, the Iraqi military said.

A number of Daesh commanders were killed in an air strike on a position in Hay al-Tanak, a stronghold of the group, they said.

Among those killed were commanders in charge of booby traps, of Arab suicide fighters and child recruitment, the statement added, without identifying them by name. The two other strikes killed militants and destroyed weapons and vehicles.

Daesh media outlets did not mention the strikes.

A Reuters TV crew saw dozens of people fleeing their homes near or across the frontline, braving sniper and mortar fire, while a helicopter strafed positions further north.

"Shells were falling on us and there is no food, no water, no electricity," said Hamda Bakheet, a woman in her mid-sixties from the Nablus district, adding that the militants were firing on people who leave the city.

Bakheet said one of her sons was killed when the terrorists first overran Mosul and the other was accused of being a "renegade" and jailed a year ago. "I hope the army will free him soon."

The improved weather should also allow ground forces to resume their advance toward the Grand al-Nuri Mosque, where the militants' leader, Abu Bakr al-Baghdadi, declared a "caliphate" nearly three years ago over parts of Iraq and Syria.

Heavy fighting with machine guns, rocket propelled grenade launchers and mortars was heard by the Reuters TV crew coming from the area around the mosque, located in the old city and famous for its leaning minaret.

The current phase of the campaign is the most difficult as narrow alleyways in the densely populated old city limit the use of artillery, air power and armored vehicles.

An explosion in western Mosul last month killed between 60 and 240 people, according to various accounts.

U.S. President Donald Trump's son-in-law, Jared Kushner, flew into Iraq on Monday with the top U.S. general to get a first-hand assessment of the battle against Daesh from U.S. commanders on the ground and Iraqi leaders.

The trip comes as Trump examines ways to accelerate a campaign that U.S. and Iraqi officials say has so far largely succeeded in uprooting Daesh in Iraq and Syria.