Israel-Lebanon tension heats up over Iran's presence in Middle East 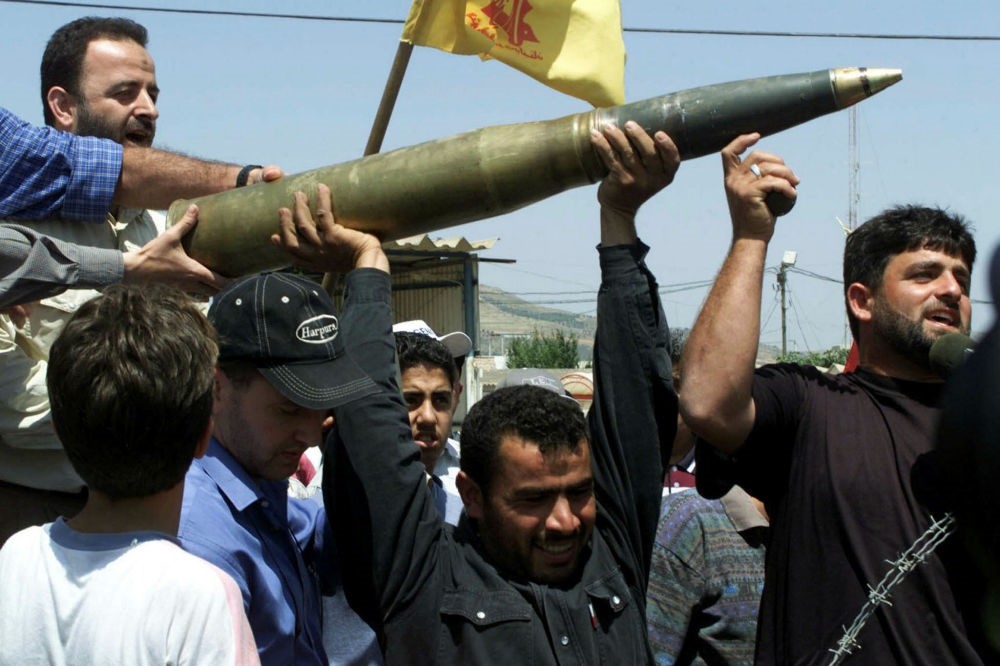 Lebanese demonstrations hold up an Israeli tank shell left behind by withdrawing Israeli troops along the Israel-Lebanon border near Metulla.
by Yusuf Selman İnanç Apr 07, 2017 12:00 am

Israel is concerned over Iran's growing influence in the Middle East, particularly in Syria and Lebanon. Given the recent escalation of tensions between the two countries, Israel may target Tehran's proxy, the Lebanon-based Shiite militant group, Hezbollah

Over the last few weeks, tensions between Lebanon and Israel have increased since the latter reckons that the Tehran-based Shiite militant group Hezbollah was gaining strength as Iran increased its influence in Syria and Lebanon.

Following an Israeli decision to expand its maritime control zone and unveil the "David's Sling" missile system at its Hatzor air force base, Lebanese Prime Minister Sa'ad Hariri said last weekend that Israel was looking to launch a new war on Lebanon.

The Israeli Parliament proposed a bill last month that looked to redraw Israel's maritime economic border with Lebanon in an attempt to expand its control and economic benefits on the sea. In the bill, Israel claimed control of a patch of maritime territory, spanning some 800 square kilometers, which has long been disputed.

In a harsh response, Lebanese Parliament Speaker Nabih Berri said that redefining the maritime border meant a declaration of war.

"The recent decision taken by Israel regarding the territorial waters is equal to a declaration of war against Lebanon," he told local Lebanese media. "It is a new attack on Lebanon's sovereignty."

Berri and several Lebanese media outlets accused Israel of annexing the controversial area since it is believed to hold rich natural gas reserves.

Meanwhile, Israel has been targeting Iran-backed Shiite militia group Hezbollah and regime forces in Syria with concerns that Hezbollah might target Israel at any given moment with new weapons supplied by Iran and Russia.

An article, published in The Nation last week quoted a Hezbollah commander as saying, "We've got heavy long-range missiles, directly from the Russians, that can strike anywhere in Israel."

Likewise, Hezbollah leader Hassan Nasrallah last month said that his fighters were sufficiently equipped to hit the Israeli nuclear reactor in Dimona. On the other hand, Israeli Brig. Gen. and former Counter-Terrorism Bureau Director Nitzan Nuriel last week said the war with Hezbollah was only a question of time.

Hariri, however, disregarded Israel's concerns and said, "I think Israel is the one that wants to launch a war against Lebanon and not Hezbollah," adding: "Israel does not want Arabs to rest. Look at the daily Israeli violations of our airspace, land and territorial waters."

Israel also seems determined to take action against Hezbollah since Iran, allegedly, intends to build a military base near the disputed Golan Heights and has been building facilities to manufacture weapons inside Lebanon.

Chagai Tzuriel, the director-general of the Israeli Intelligence Ministry, said Monday that Iran was allegedly building workshops and facilities to produce advanced rocket systems inside Lebanon and described it as a whole new kind of threat.

Despite the fact that Israel has carried out several air raids on the Syrian regime and Hezbollah positions not just in the occupied Golan Heights but also on the outskirts of Damascus, Tel Aviv has so far avoided encountering Iran over regional conflicts. Instead, it has made several comments on Iran's pursuit of nuclear power and its tests of long-range missiles capable of carrying nuclear warheads.

Once again, Tel Aviv may opt for targeting Iran's proxy in Lebanon since it is worried about an Iranian presence in its neighborhood.

As long as Iran has the power to dominate Damascus and mobilize Shiite groups, there will eventually be conflict with Israel. But, this time around the Lebanese government may side with Hezbollah against Israel.
RELATED TOPICS