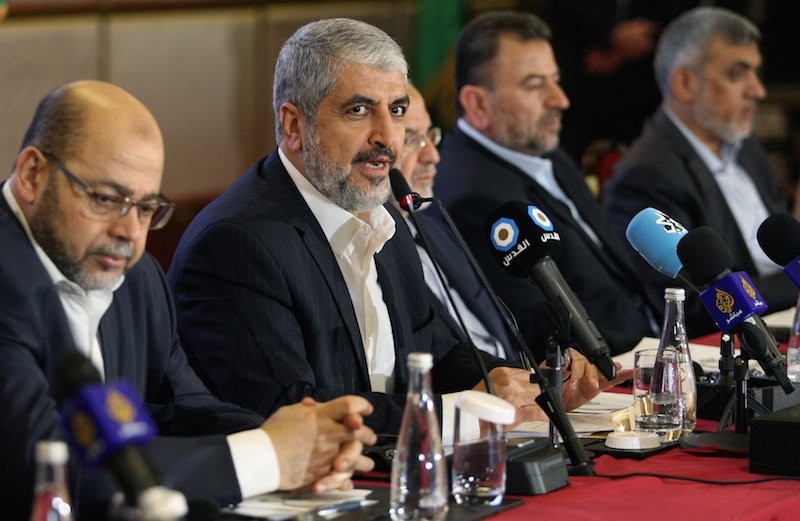 Experts assessing the new political document that was revealed by Khaleed Mashaal, the head of the Political Bureau of Hamas, have stated that Hamas' steps to increase its legitimacy on an international level would disquiet Israel.

Experts offered Anadolu Agency an assessment of the new policy document and its vision, setting out its general principles and policies, which were made public by Mashaal during a press conference Monday.

Ufuk Ulutaş, the Foreign Policy director of the Foundation for Political, Economic and Social Research (SETA), said that Israel's first reactions to the statement released by Hamas were intended to be political maneuvers.

Ulutaş, who indicated that Israel supported the Fatah camp against Hamas in the rivalry between the two Palestinian political entities, stated that Israel would not be pleased with Hamas' new roadmap.

"The entrance [of Hamas] into the political arena as a new political actor, an actor whose political and international legitimacy has been increased, as well as an actor who, by popular perception, is bigger than Fatah, will not please Israel," Ulutaş said.

"For this reason, it [Israel] will strive to hinder Hamas' expansion of international legitimacy through the document by alleging that the statement does not include much change. The U.S. is going to assume a similar position," he added.

"Israel's injustice has been announced to the world"

Professor Ahmet Uysal, faculty member from the International Relations Department at Istanbul University, indicated that Hamas aimed for a diplomatic opening and stated, "It does not actually recognize Israel, but it is sending out the signal that 'we can recognize the borders of 1967.' This is a diplomatic maneuver."

"I think that there will be little acceptance from Israel, but in the end, this is a struggle which comprises of several aspects, including diplomacy and armed struggle. In this way, Hamas has given weight to the diplomatic side of the struggle. At least it will have announced its own righteousness and Israel's injustice to the world. It will create new pressure for Israel to withdraw to the borders from prior to 1967, but I do not think that Israel will give this much consideration," Uysal added.

In 1967, Israel captured Gaza, the West Bank and East Jerusalem from a coalition of Arab states in what is known as the Six-Day War. With the signing of the Oslo Accords, Israel withdrew from parts of the West Bank and handed over control in some pockets to the newly created State of Palestine (Palestinian National Authority).

However, Israel maintains strict military control over the movement between Palestinian pockets of control and to their east to Jordan, in addition to continuing construction of new settlements in Palestinian lands. Israel also withdrew from Gaza in 2005, but it is de-facto under Israeli blockade.

Oğuz Çelikkol, Turkey's former ambassador to Tel Aviv and faculty member of Istanbul Kültür University's International Relations Department, stated that Palestinian President Mahmoud Abbas planned to meet U.S. President Donald Trump and said, "It seems that making alterations to Hamas' political charter prior to the meeting [with Trump] somewhat reinforces Abbas' position. We will be able to see the stance of the U.S. somewhat more clearly after this meeting."

"Trump may find himself in a position to solve the Israeli-Palestinian conflict," Çelikkol concluded.

Professor Muhittin Ataman, Director of Educational and Social Policies of SETA, asserted that he did not expect a positive response from Israel to the Hamas statement. "This step can be perceived as being directed toward a change in the attitude of the U.S. and the Trump administration," Ataman stated.

"Trump, by way of surprise, could find himself in the position of being able to solve the Israeli-Palestinian conflict. He could undertake an unexpected step as a consequence of his hardline politics (...) I believe that there is a high chance that this man proves." Ataman added.

Through its new roadmap, Hamas redefines itself as a national liberation group, while distancing itself from its parent movement, the pan-Arab Muslim Brotherhood, which has been outlawed by neighboring Egypt.
Last Update: May 03, 2017 9:28 am
RELATED TOPICS