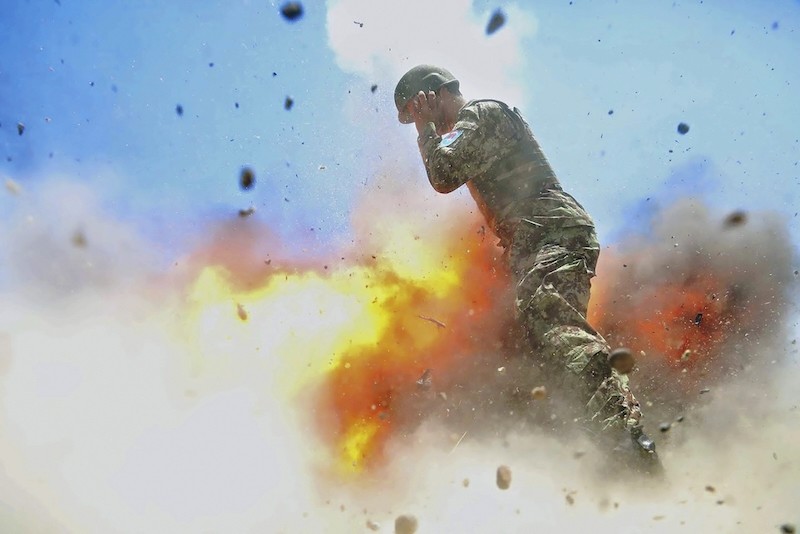 The U.S. Army has published the final photo of a combat photographer, who was killed seconds after taking the picture in an accidental mortar blast in Afghanistan nearly four years ago.

The Army's professional journal says the image illustrates how women are increasingly exposed to dangerous situations in the military.

The photograph of Spc. Hilda Clayton was published Monday in Military Review.

"Clayton's death symbolizes how female soldiers are increasingly exposed to hazardous situations in training and in combat on par with their male counterparts," Military Review wrote.

Clayton snapped the picture during a live-fire training exercise on July 2, 2013 in the Laghman Province, Afghanistan. The blast also killed four Afghan National Army soldiers. One of them was a photojournalist Clayton had partnered with to train.

Military Review noted that the explosion happened during a critical moment in the war, when it was important for U.S. and Afghan forces to work in partnership to stabilize the country.

"Not only did Clayton help document activities aimed at shaping and strengthening the partnership but she also shared in the risk by participating in the effort," the journal added.

Clayton, who was from Augusta, Georgia, was a member of the Fort Meade, Maryland-based 55th Signal Company, which is known as Combat Camera. She was 22.

Gordon Van Vleet, a spokesman for the Network Enterprise Command, which is the higher headquarters for the 55th Combat Camera Company she served under, said Clayton's final photo was published with her family's permission. Van Vleet said the family is declining to comment.

Combat Camera honored Clayton by naming an annual award for the best combat photography after her, Military Review wrote. Combat Camera soldiers are trained to take photos and video in any environment and accompany soldiers to document combat operations.