Trump-Abbas meeting signals hope for peace with no details 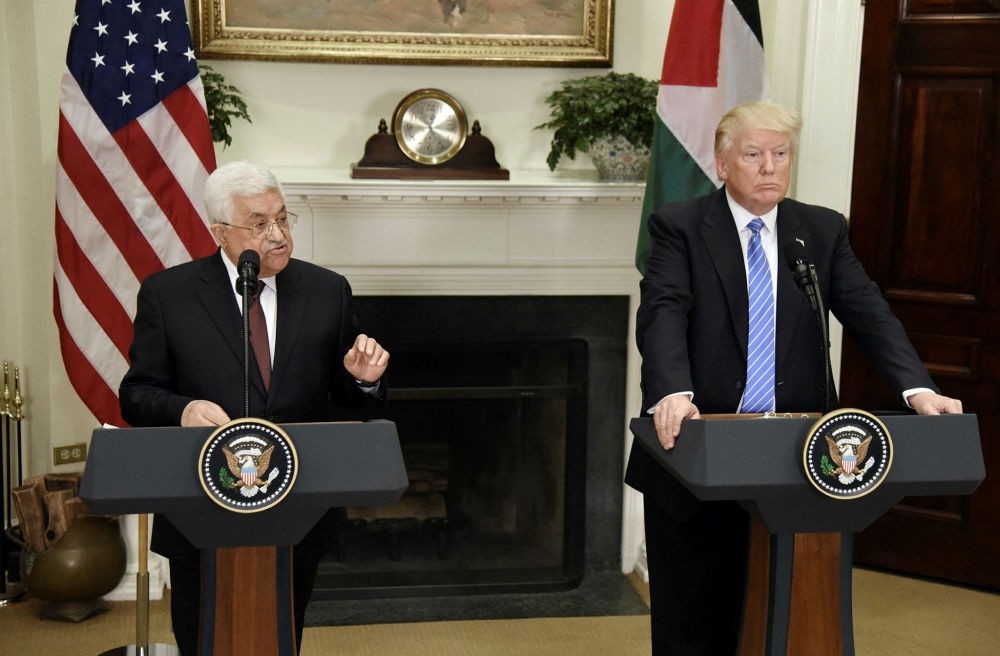 U.S. President Donald J. Trump gives a joint statement with President of the Palestinian Authority Mahmoud Abbas in the Roosevelt Room of the White House in Washington, USA, on May 3.
by Compiled from Wire Services May 05, 2017 12:00 am

The first meeting between President Donald Trump and Palestinian President Mahmoud Abbas revealed hope for the Middle East process, yet without any specifics about how to restart long-stalled Israeli-Palestinian negotiations

After two decades of intermittent U.S.-led negotiations ended in failure while Israeli settlements keep expanding, U.S. President Donald Trump told Palestinian President Mahmoud Abbas on Wednesday he was committed to working with Israelis and Palestinians to reach a peace agreement.

Trump offered no prescriptions for what a deal should look like, only saying that he would play the role of "a mediator, or an arbitrator, or a facilitator." "Any agreement cannot be imposed by the United States, or by any other nation," Trump said.

Despite the lack of specifics, Abbas described his meeting with Trump as positive and said that "we build hopes on it." "So far, we didn't talk about a mechanism, but the contacts between us and the Americans began and will continue," he said.

Abbas said he believes the Trump administration can play an important role as a mediator, and the U.S. president indeed restated his ambition to facilitate the deal that has eluded negotiators for over two decades.

But he also said outsiders cannot impose terms on the parties — which some see as a coded warning that there are limits to the U.S. willingness to invest political capital. Some peace proponents on both sides have concluded that only massive international, regional or American pressure or enticements might break the impasse.

Abbas also does not appear to have secured U.S. backing for pressure on Israel to end settlement construction in the lands the Palestinians claim for a future state — a major goal for the embattled Palestinian leader.

Still, the very fact that the meeting was held was an improvement for Abbas over the early weeks of the Trump administration, when the Palestinians felt ignored and frozen out. Trump's long-shot effort to bring Middle East peace got off to a rocky start when he appeared to back away from supporting a Palestinian state and vowed to move the US embassy to Jerusalem, breaking two tenets of American policy held for decades.

"Mr. President, it's about time for Israel to end its occupation of our people and our lands," Abbas said, listing demands that the current Israeli government has baulked at.

Among them, the right of return for Palestinians to lands currently held by Israel and the establishment of a Palestinian state with its capital in East Jerusalem and based on 1967 borders.

The Palestinians want to set up a state in the West Bank, Gaza Strip and east Jerusalem, lands Israel captured in the 1967 Mideast war. Abbas reiterated the demand as he stood next to Trump at the White House.

However, there have been no serious negotiations since gaps widened with the 2009 election of Benjamin Netanyahu as Israel's prime minister. Netanyahu rejects the 1967 frontier as a baseline for border talks and rules out a partition of Jerusalem where Palestinians hope to establish a capital. The Netanyahu government, like those before it, have expanded settlements on war-won lands, despite U.S. appeals to curb construction.
RELATED TOPICS