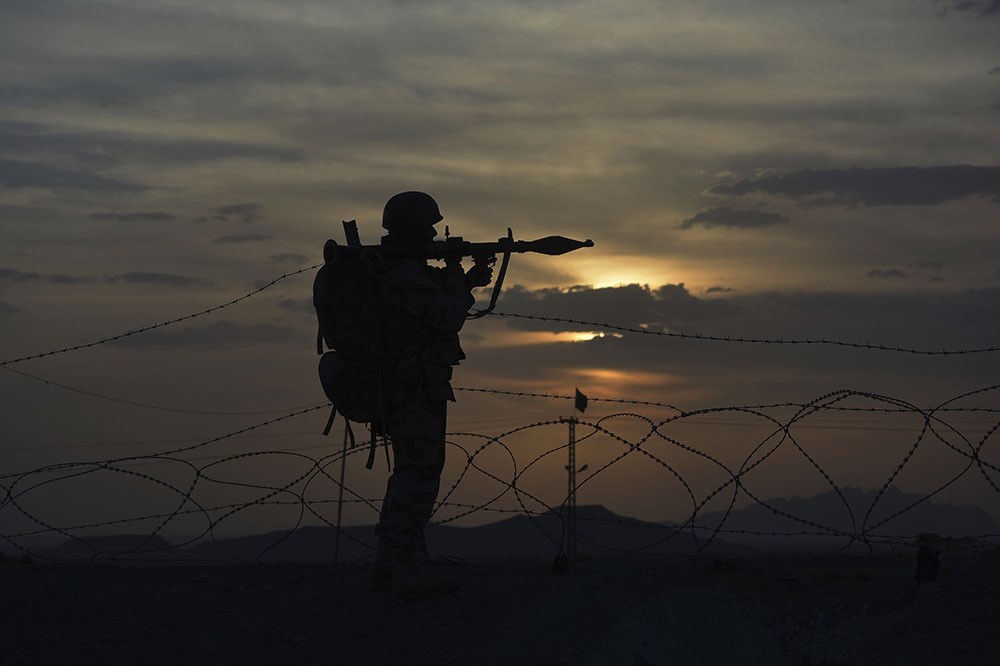 A Pakistani border security guard stands alert at Pakistan-Afghanistan border post, Chaman in Pakistan, Friday, May 5, 2017. (AP Photo)
by Associated Press May 07, 2017 12:00 am

At least five Afghan checkpoints near the border with Pakistan were destroyed and 50 security forces killed in fighting in recent days, Pakistan's military said Sunday, even as Afghan officials dismissed the claims as "baseless."

Two Pakistani soldiers were also killed in the fighting that began Friday and another nine were wounded, Maj. Gen. Nadeem Ahmad told reporters at the Chaman border crossing. Another 100 Afghan security forces were wounded, he said.

Najib Danish, spokesman for the Afghan interior ministry, disputed the account, however, insisting no checkpoints were destroyed.

"That is completely baseless," he said. He said two Afghan border police were killed in Spin Boldak on the Afghan side of the border and another 11 were wounded. He said mostly civilians were harmed in the attack.

The Pakistani and Afghan armies have been clashing at the Chaman border crossing in southwestern Baluchistan province since Friday. The latest round of clashes is a dangerous escalation in tensions between the two uneasy neighbors who share a 2,200 kilometer (1,375-mile) porous border.

Officials in Islamabad say the fighting began after Afghan security forces fired on Pakistani census workers and the troops escorting them, killing nine civilians and wounding 42, including women and children. Census workers were going door-to-door in villages located along the border and the Afghan government was informed, with exact coordinates of the areas shared with Kabul, Pakistan officials say.

Friday's fighting ended when local commanders from the two armies de-escalated the situation over a hotline set up for such situations. However, hostilities reignited over the weekend over the centuries-old dispute between Islamabad and Kabul at the boundary, known as the Durand Line, which runs through villages on both sides.

Pakistan and Afghanistan routinely accuse each other of providing sanctuaries to their enemy insurgents, a charge both sides deny.