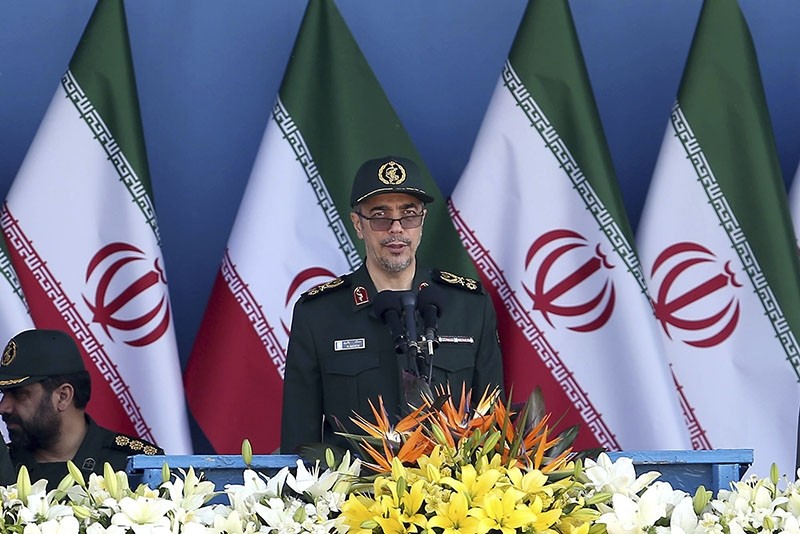 In this Sept. 21, 2016 file photo, Iran's Chief of Staff Gen. Mohammad Hossein Bagheri delivers a speech during a military parade marking the 36th anniversary of Iraq's 1980 invasion of Iran, in front of Khomeini's shrine, Tehran, Iran. (AP Photo)
by Daily Sabah May 08, 2017 12:00 am

The head of the Iranian armed forces warned Islamabad on Monday that Tehran would hit bases inside Pakistan if the government does not confront militants who carry out cross-border attacks.

The border area has long been plagued by unrest from both drug smuggling gangs and separatist militants.

"We cannot accept the continuation of this situation," Major General Mohammad Baqeri, the head of the Iranian armed forces was quoted as saying by state news agency IRNA.

"We expect the Pakistani officials to control the borders, arrest the terrorists and shut down their bases."

"If the terrorist attacks continue, we will hit their safe havens and cells, wherever they are," he said.

In 2014 Iran warned it would send troops to Pakistan to retrieve five Iranian border guards kidnapped by Jaish al Adl. Pakistan said at the time that such action would be violation of the international law and warned Iranian forces not to cross the border.

Iran refrained from sending the troops when a local Sunni cleric stepped in and resolved the situation.

Four of the guards were released a few months later, but one was killed by the militants.

Jaish al Adl is a militant group that has carried out several attacks against Iranian security forces with the aim of highlighting what they say is discrimination against minority Sunni Muslims in Iran, where the majority are Shiites.