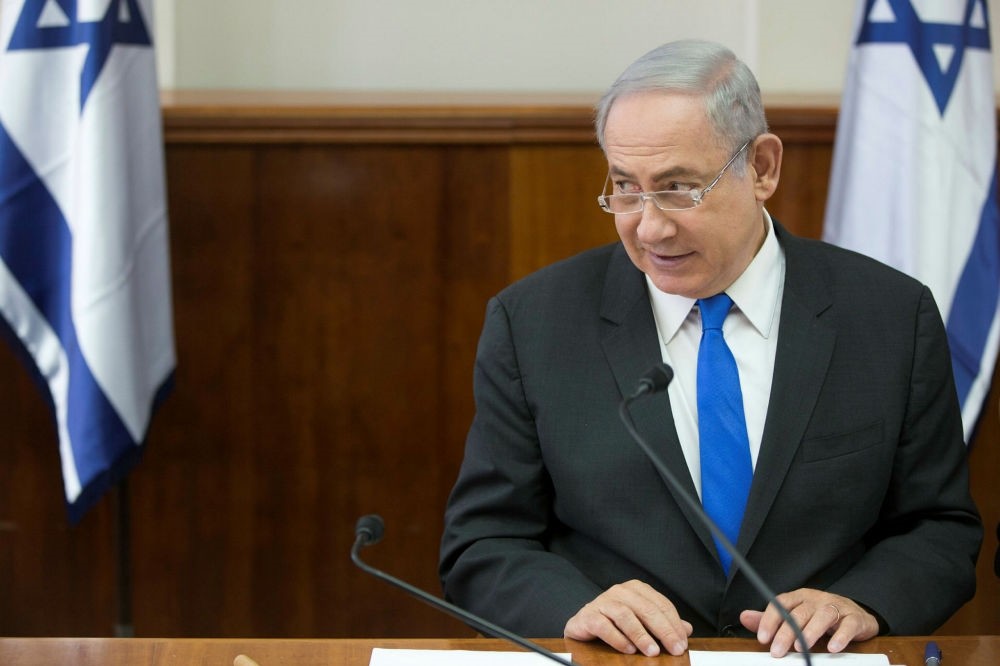 Israeli Prime Minister Benjamin Netanyahu chairs a weekly cabinet meeting at his office in Jerusalem, May 7.
by Compiled from Wire Services May 09, 2017 12:00 am

Israel's cabinet breathed new life on Sunday into efforts to anchor in law the country's status as a Jewish state, legislation Palestinians have described as an obstacle to peace.

A ministerial committee approved a revised version of a bill first proposed in 2011 that declares the "State of Israel is the national home of the Jewish people", its author, Avi Dichter of Prime Minister Benjamin Netanyahu's right-wing Likud party, wrote on Facebook.

The controversial bill was unanimously approved by the Ministerial Committee for Legislation. The legislation still has to go through further drafting by the Justice Ministry and pass several votes in parliament in what could be a lengthy process. But the cabinet-level step -- two weeks before a visit by U.S. President Donald Trump -- could help Netanyahu shore up relations with far-right members of his government and underpin his campaign to press Palestinians to recognize Israel as the "nation-state" of the Jewish people.

The "nation-state bill" states that "the right to realize self-determination in the State of Israel is unique to the Jewish people."

Avi Dichter, a member of Prime Minister Benjamin Netanyahu's right-wing Likud party who proposed the bill, called the committee decision a big step in "defining our identity" and was needed to combat the goal of some Palestinians to erase Israel, according to the Times of Israel newspaper.

A similar bill failed in 2014. Hebrew and Arabic are Israel's current official languages. The bill states that Hebrew would be the lone national and downgrades Arabic to "a special status in the state" whose "speakers have the right to language-accessible state services."

Palestinians say accepting Netanyahu's call could deny Palestinian refugees of past wars any right of return. Palestinian President Mahmoud Abbas has characterized such "nation-state" legislation as putting "obstacles in the way of peace."

Critics slam the bill as discriminatory against Israeli Arabs, who make up more than 20 per cent of Israel's population of 8.7 million, as well as other minorities. If passed, critics say it could undermine Israel's balance of being both a Jewish and democratic state by harming the rights of the country's minorities.

An Arab-Israeli lawmaker slammed the committee's decision on Sunday, calling the bill the "tyranny of the majority" and warning that it would demote Arab-speaking citizens in society.

"The danger of this bill is that it creates two classes of citizens," the Times of Israel quoted Ayman Odeh as saying.

Centrists in Netanyahu's government have argued a "nation-state" bill is unnecessary, noting the 1948 Declaration of Independence already proclaimed a Jewish state. They have accused him of pandering to right-wingers, and past versions of the legislation failed to make it through parliament.
RELATED TOPICS