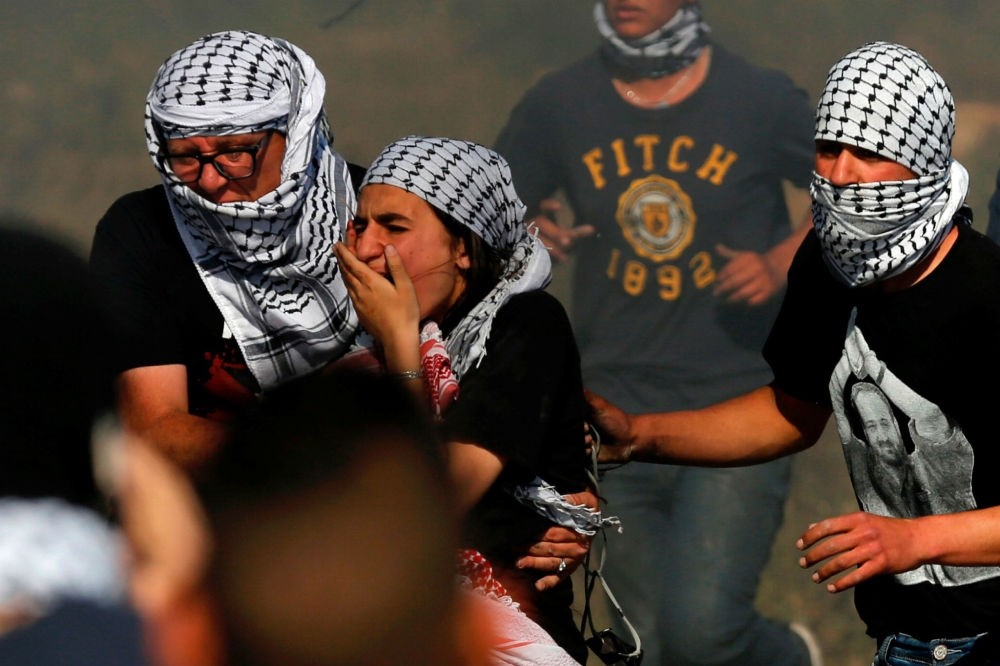 A female Palestinian protestor was hit in the face by a rubber bullet during clashes with Israeli security near the Jewish settlement of Beit El, north of the West Bank city of Ramallah, May 11. (AFP Photo)
by Compiled from Wire Services May 13, 2017 12:00 am

As hundreds of Palestinian prisoners held by Israel have been on an open-ended strike, protests turned violent after a Palestinian was killed by Israeli fire during clashes at a West Bank rally

At least two Palestinians were wounded by rubber bullets and evacuated on stretchers with bloodied legs, an AFP journalist reported.

The clashes broke out at a major checkpoint at the entrance to Ramallah and another near the Israeli settlement of Beit El, the site of regular demonstrations against Israel's 50-year occupation of the West Bank.

At least 244 Palestinians have died during a wave of sporadic violence in Israel and the Palestinian territories that began in October 2015. At least 164 of them had launched stabbing, shooting or car ramming attacks, Israel says. Others died during clashes and protests.

The protest was called in support of hundreds of Palestinian prisoners on hunger strike in Israeli jails since April 17.

"We are entering an extremely critical period" for the hunger strikers, Qadura Fares, head of the Palestinian Prisoners Club, said earlier at a rally in Ramallah.

"A large number of prisoners can no longer move from their bed or take care of their basic needs."

The Red Cross visited the strike's leader, Marwan Barghouti, on Thursday for the first time since the protest began.

An ICRC spokesman was unable to provide an update on his health "in accordance with the principles of medical confidentiality".

The ICRC had previously been allowed access to other prisoners on hunger strike, but Israel had restricted access to Barghouti.

Hunger strikers have issued a list of demands including better medical services, family visits and more dignified conditions in detention.

Barghouti, a senior member of Palestinian President Mahmud Abbas's Fatah party and a highly popular figure among Palestinians, is serving five life sentences over his role in the second Palestinian intifada, or uprising.

About 6,500 Palestinians are currently held by Israel for actions related to the long-running conflict, including stone-throwing, membership in organizations outlawed by Israel and attacks that wounded or killed Israelis. Several hundred Palestinians are held without charges or trial. The ICRC's statement criticized Israel's cancellation of family visits to hunger striking prisoners in recent weeks, saying "the families are paying the price for this situation."

He denied claims that Israel was violating international law, and accused the ICRC of helping create the crisis. Last year, the ICRC reduced the family visits it facilitates from twice a month to once a month, citing an increasing number of "no-shows" by Palestinian relatives of prisoners.

The ICRC said the responsibility for family visits rests on Israeli authorities, not the Red Cross. It said Israel's incarceration of Palestinians in Israel, rather than the West Bank, was a violation of international law.
RELATED TOPICS