West Bank Palestinians take to the polls for local elections 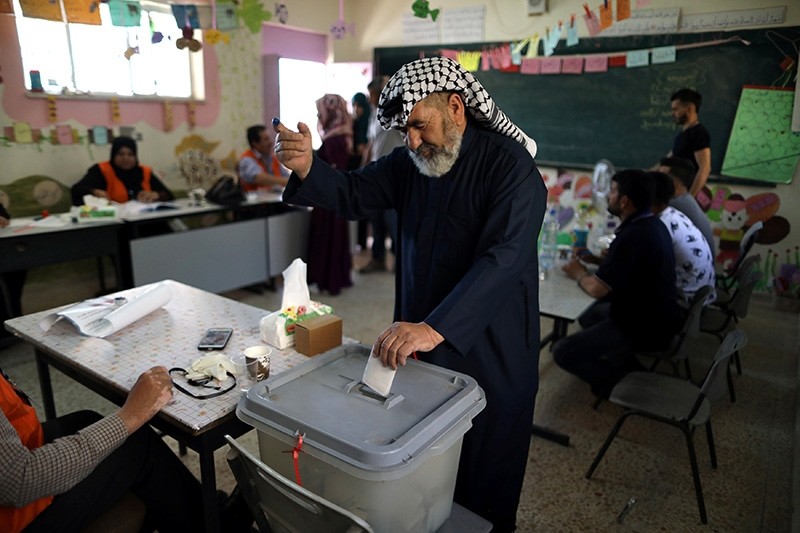 A Palestinian man casts his ballot at a polling station during municipal elections in the West Bank village of Yatta, near Hebron May 13, 2017. (Reuters Photo)
by Compiled from Wire Services May 13, 2017 12:00 am

Palestinians held municipal elections on Saturday in the occupied West Bank, a first democratic exercise in years, but one that has also raised tensions between the rival Fatah and Hamas movements.

With no legislative or presidential elections in sight, the municipal ballot is seen as a popularity test for Western-backed President Mahmoud Abbas and his Fatah party, caught in a deep rift with Hamas, which is designated as a terrorist by an important number of countries.

Underlining the political schism, about 800,000 Palestinians were expected to vote for representatives in 145 local councils in the West Bank, but not in the Gaza Strip.

Only 145 West Bank localities were up for vote, after the more than 200 others either failed to submit an electoral list or submitted only one, meaning automatic appointment, according to the Palestinian Central Election Commission.

More than 4,400 candidates are competing for 1,561 council seats. The first results are expected Sunday.

Palestinian Prime Minister Rami Hamdallah cast his vote at a polling station in his hometown of Anabta in the northern West Bank.

Speaking to reporters after the vote, Hamdallah said the elections "send a message to the world that our people deserve a state as any other nation in the world."

Months of political and legal wrangling preceded Saturday's elections. Abbas's Palestinian Authority, which governs in the West Bank, and Hamas, which runs Gaza, blamed each other for the vote not being held in the small coastal enclave.

"No doubt this is the democratic life we have promised our people," said Fatah Deputy Chief Mahmoud al-Aloul. "Unfortunately this joy is taking place in the West Bank alone because Hamas is preventing the people from practicing this right in Gaza."

Hamas said The Palestinian Authority had made a unilateral decision to go ahead with the vote before an agreement on a legal framework had been reached.

"The elections are happening without national consensus. Holding them in the West Bank alone, without Gaza, will cement division," said Hamas spokesman Fawzi Barhoum.

Hamas boycotted the previous municipal elections, held in 2012. But it has urged its supporters to vote for representatives running in the current race.

The last legislative election was held in 2006 and Hamas scored a surprise victory. That laid the ground for a political rupture - Hamas and Fatah fought a short civil war in Gaza in 2007, since when Hamas has governed the small coastal enclave.

Some polls show that if parliamentary elections were held now, Hamas would win them in both Gaza and the West Bank.

This week, Hamas's bloc won the student council elections in the prominent Palestinian university Bir Zeit, an indication of the group's support in the West Bank. Fatah came second.

Abbas, 82, is now 12 years into what was to be a four-year term and is an unpopular leader according to opinion polls. He has no clear successor and there are no steps being taken toward a presidential elections any time soon.

Chairman of the Palestinian Central Election Committee Hana Naser said Saturday's vote would be transparent with 1,400 local and international observers monitoring the process.