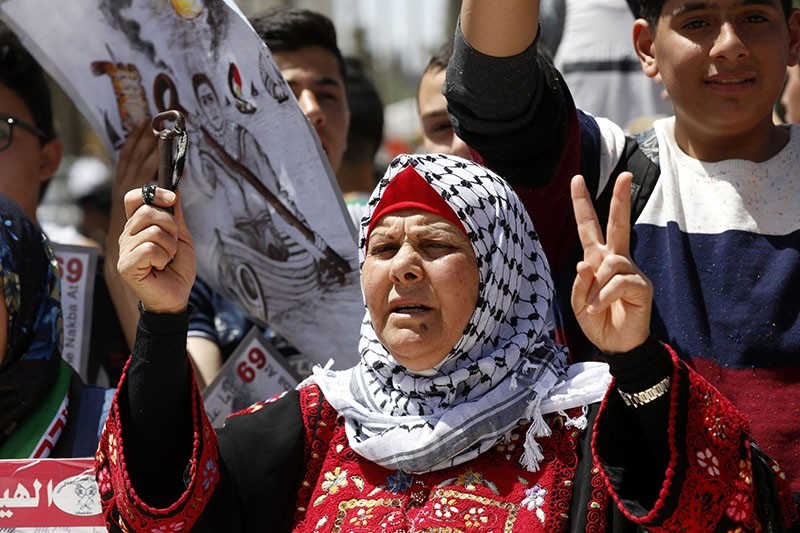 A Palestinian woman holds the key to her old family house as Palestinians carry Palestinian flags and banners as they stage a rally to mark the 69th anniversary of 'Nakba Day', in the West Bank city of Ramallah, May 15, 2017. (EPA Photo)
by May 15, 2017 12:00 am

Demonstrators flooded the streets of the West Bank and the Gaza Strip on Monday to mark the anniversary of the Nakba, or the dispersal of 700,000 Palestinians amid Israel's establishment.

The Palestinian government gave staff in Ramallah the day off to participate in the rally, which began at the grave of long-time Palestinian leader Yasser Arafat and ended at the downtown Arafat Square, where there will be speeches and nationalist music.

The war that broke out in 1948 when Israel declared statehood and neighboring Arab states invaded is remembered every year on May 15 by Palestinians as Nakba Day. Nakba means catastrophe in Arabic.

Hundreds of thousands of Palestinians fled or were expelled from their villages during the war.

Nearly seven decades on, their number has swelled to more than 5.3 million registered refugees, who live in United Nations-run camps scattered throughout the region - 27 in the West Bank and Gaza, 12 in Lebanon, 10 in Jordan and nine in Syria.

In Ramallah, sirens sounded for 69 seconds at noon as residents stood in remembrance.

In Gaza on Monday, protesters carried signs with the names of the villages they had left as well as calls for a legitimate right of return. In addition to staging rallies, the Hamas movement also set up a "Tent of Palestinian Heritage" in downtown Gaza City that showed items such as dresses and guns that were typical before 1948.

"The land is ours, Jerusalem is ours and Palestine is ours," said Hamas official Hani Islayim at an earlier march on Saturday.

The Israeli army was taking extra security precautions in the West Bank, particularly in riot-prone areas, despite relative quiet in the region in the last two years, said a spokeswoman in a statement.

Nayeh Hamdan has never been to Lod - or as he calls it, Lydda. Yet the 22-year-old college student wants nothing more than to one day see the city in central Israel where his family hail from.

"My grandparents became refugees and they died," he told dpa.

The desire to go back has been passed down the generations to Hamdan and his siblings and "we will pass it on to our children until one of us returns to our ancestral home and land," he added.

Hamdan now lives in the Amari refugee camp in the West Bank city of Ramallah, the descendent of one of the hundreds of thousands of Palestinians who were forced to flee their homes 69 years ago.

Hamdan has never gone to Lod, which was known as Lydda before being resettled predominantly by Jews, because getting a permit to enter Israel is hard for young Palestinians, particularly refugees.

Many Palestinian families still hold on to the keys to their old homes, a symbol of their will to return, though there is no telling when or if that will ever happen.

"It was our fault we left, because we didn't know what we do now," said Hassan Raddi, from the al-Shati refugee camp in western Gaza.

Raddi says he was 15 when he and his family left al-Jora, near what is now the southern Israeli city of Ashkelon.

"We reacted to fears created by Jewish propaganda" in deciding to leave, he said.

Ola Awad, president of the Palestinian Central Bureau of Statistics (PCBS), tried to sum up in a report what Nakba signifies to him.

"Nakba, in literary terms, means a natural catastrophe such as an earthquake, volcano, or hurricane," he wrote.

"However, the Nakba in Palestine describes a process of ethnic cleansing in which an unarmed nation was destroyed and its population displaced to be replaced systematically by another nation."

Israel rejects the return of all refugees and their descendants to its own territory. Instead, it wants a future Palestinian state to absorb the vast majority. However, nearly all refugees are adamant that they will not accept compensation for their homes.

"We will never forget or forgive," said Hamdan, the student from the refugee camp in Ramallah.