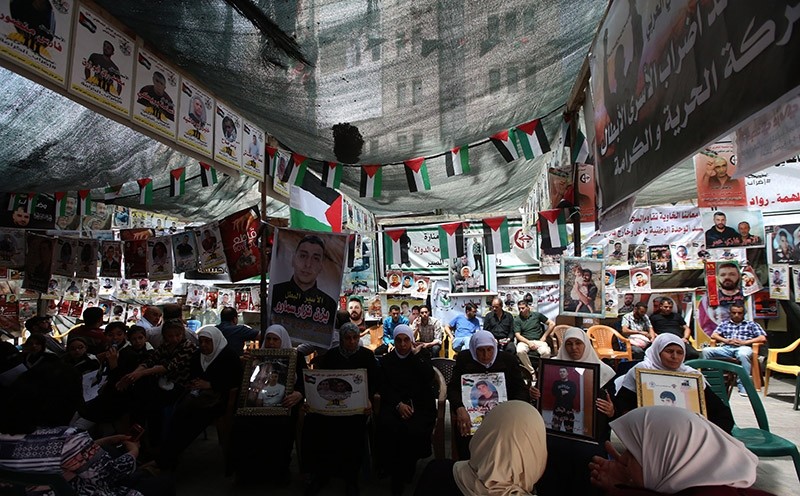 Palestinians sit among pictures of men held in Israeli jail during a protest in solidarity with Palestinian prisoners on hunger strike in Israeli jails, in the West Bank city of Nablus. EPA Photo
by Anadolu Agency May 15, 2017 12:00 am

Hundreds of incarcerated Palestinians entered the 29th day of an open-ended hunger strike Monday, remaining defiant with the hope of receiving better conditions in Israeli jails.

Spearheaded by long-term prisoner Marwan Barghouti, the mass strike is considered one of the largest by Palestinian prisoners in recent years.

"The strike aims to retain many of the prisoners' rights taken away by the Israeli prison administration," Issa Qaraqe, head of the Palestine Liberation Organization (PLO)'s committee on detainees, told Anadolu Agency.

He said jailed Palestinians demand the resumption of bi-monthly family visits, which were halted last year, and allowing visits by second-degree relatives.

"They also want to increase the duration of visits from 45 to 90 minutes and allow taking photographs with their families," Qaraqe said.

He said the demands also include the release of sick prisoners and ending the policy of solitary confinement and administrative detention.

"Prisoners also want jailed women to have a human and private transportation and allow them to meet their families without barriers," he said.

According to Qaraqe, Palestinian prisoners also call for improving their conditions and ending the policy of medical neglect.

On Sunday, Barghouti, who has been imprisoned for more than a decade, vowed to continue the strike "until the demands of all prisoners achieve".

Abul Majid Swealim, a political analyst, described the hunger strike as a powerful weapon used by prisoners against Israel.

"Israeli authorities did not expect such a widespread participation in the strike," he told Anadolu Agency.

He said that Israel did not expect the worldwide solidarity with the mass strike.

"The hunger strike imposed itself not only on the Palestinian scene but also globally," he said.

"Israel is racing against time in an attempt to break the strike, and contain the damage caused to its image around the world," Swealim said.

The analyst warned that Israel could take a "reckless" move and force-feed the prisoners in an effort to end the mass strike.

"This policy would lead to the explosion of the situation in the Palestinian territory," he warned.

Last week, a group of Israeli doctors called on colleagues both in Israel and internationally to reject plans to force-feed hunger-striking Palestinian prisoners.

According to Palestinian figures, Israel is holding more than 6,500 Palestinians -- including 57 women and 300 children -- at 24 prisons and detention centers throughout the country.