Daesh terrorists only control 10 percent of Mosul, near total defeat 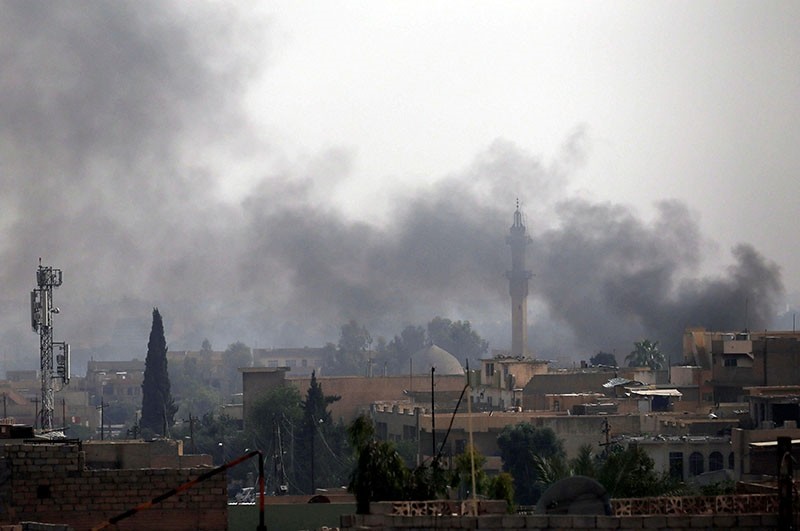 Smoke is seen as Members of Iraqi Counter Terrorism Service (CTS) forces clash with Daesh militants in western Mosul, Iraq May 15, 2017. (Reuters Photo)
by Compiled from Wire Services May 16, 2017 12:00 am

Iraqi forces have recaptured nearly 90 percent of west Mosul from the Daesh group and terrorists in the city are on the "brink of total defeat," military spokesmen said Tuesday.

Iraqi forces launched the massive operation to retake Mosul from Daesh nearly seven months ago, fighting their way to the terrorist-held city, retaking its eastern side and then attacking the west across the Tigris River.

Rasool said the terrorist group now holds 6.4 percent of Iraq in total, exclusively in the northern province of Nineveh, after US-backed troops regained most areas.

In June 2014, 40 percent of Iraqi territories fell under the control of militants. The Mosul operation began on October 17, 2016. In January, Iraq declared the liberation of eastern Mosul and began its campaign in the western side in February.

Speaking alongside Rasool in Baghdad, Dorrian said that "around one million displaced Iraqis returned to their homes in liberated areas."

"The enemy is completely surrounded," Dorrian told the news conference. "The enemy is on the brink of total defeat in Mosul."

The drive to retake Mosul has been supported by a campaign of coalition air strikes in and around the city.

"Our strikes have also destroyed more than 200 Daesh tunnels and more than 1,000 of their fighting positions," he said.

The terrorist group now controls just a handful of neighborhoods around the Old City, one of the country's heritage jewels.

The area's narrow streets and closely spaced buildings make it difficult for federal forces to take on the terrorists, requiring them to fight on foot instead of from vehicles as they have previously done.

Half a million people are currently displaced as a result of the battle for Mosul, and some 250,000 civilians are estimated to still be trapped inside the city's west.

The number of those fleeing has been on the rise, with Thursday seeing around 20,000 people fleeing west Mosul, the Norwegian Refugee Council said, in the biggest single-day displacement since the start of the operation.

The presence of a large civilian population, which either chose not to leave or was prevented from doing so by Daesh, complicates any final assault to seal victory in Mosul.

While coalition air strikes have aided the advance of Iraqi forces, they have also reportedly caused hundreds of civilian casualties in the city.

Human shields have become a central feature of the vastly outnumbered terrorists' defenses, and IS has stopped at nothing to deter people from escaping the city, including killing people who seek to flee.

Trapped residents reached by AFP inside Daesh-held areas have also recently warned that hunger was starting to kill more people than the fighting.

In eastern Mosul, life returned to a semblance of normality fairly quickly after Iraqi forces drove the militants back neighborhood by neighborhood until the area was fully recaptured earlier this year.

The extremist group overran large swaths of Iraq and Syria in June 2014, where they cemented their control over the cities of Mosul and Raqqa in both countries respectively.

The coalition launched its offensive in Iraq and Syria in August 2014. Militants have been pushed back from many of the areas they controlled.