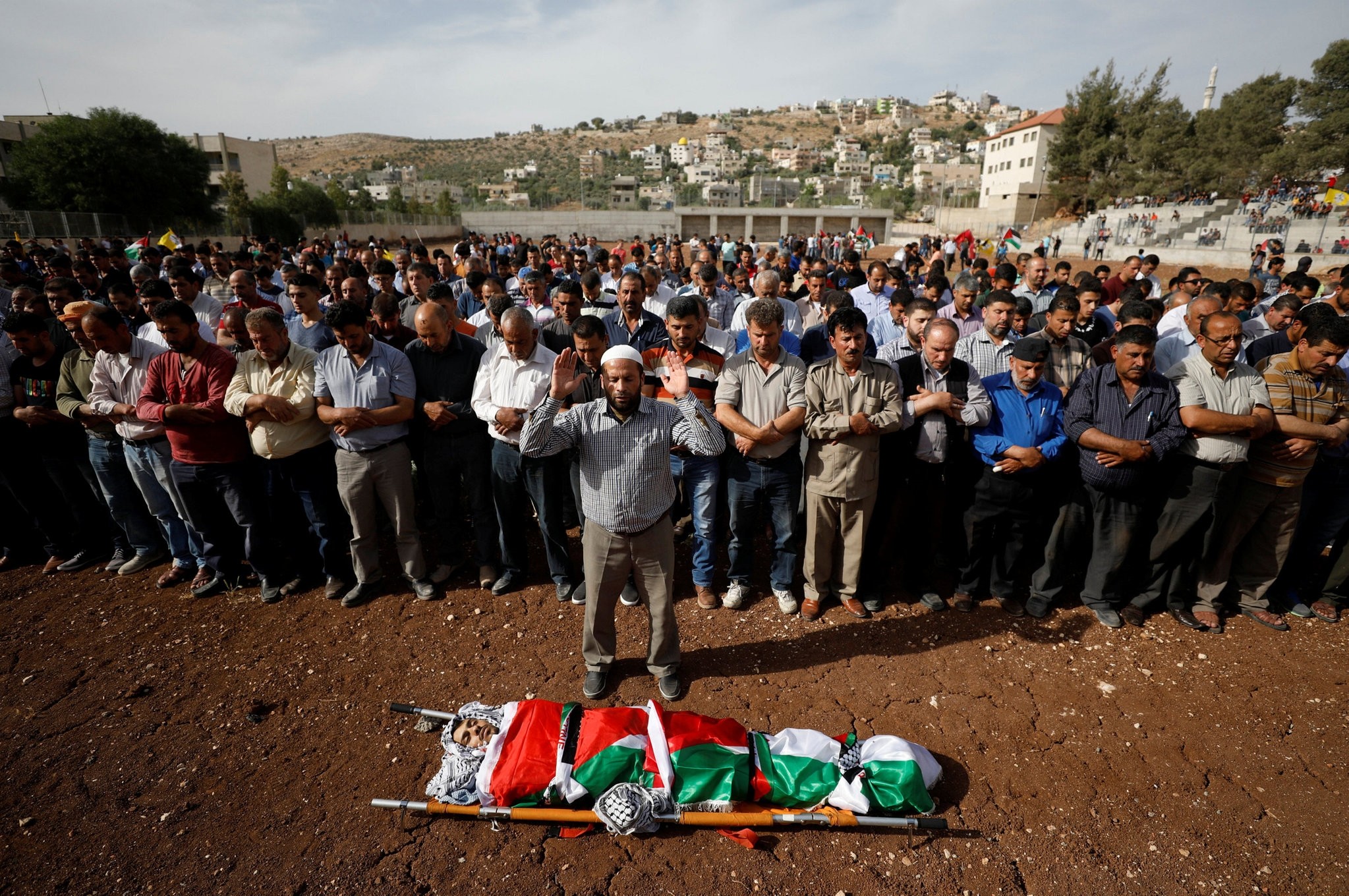 Mourners pray next to the body of Palestinian Motaz Bani Shamsa during his funeral in the West Bank village of Beita, near Nablus May 18, 2017. (REUTERS Photo)
by Associated Press
May 18, 2017 12:00 am

An Israeli settler opened fire on Thursday at Palestinian demonstrators after his car was pelted with stones, killing a young man and wounding an Associated Press photographer who was covering the unrest, according to witnesses, video footage and medical officials.

The shooting occurred at the Hawara checkpoint in the northern West Bank, where dozens of Palestinian protesters were demonstrating in solidarity with hunger-striking Palestinian prisoners held by Israel. Hundreds of prisoners are taking part in the strike, which began on April 17.

Security camera video from the scene shows a large crowd of demonstrators blocking a main road, preventing cars, including the one driven by the settler, from passing.

As a Palestinian ambulance crosses into his lane, the man's vehicle lurches through the crowd, pushing into some of the protesters, prompting demonstrators to kick and pelt the vehicle with stones.

The car then plows into the ambulance and stops before an Israeli military jeep arrives. The man, whose name was not released, later opened fire with a pistol, according to video, witnesses and Israeli military officials. Israeli media described the man as a resident of a small hard-line settlement deep in the West Bank.

The Palestinian news agency Maan released footage showing the man's compact silver car stopping next to the ambulance and the jeep. The video appears to show him firing at least four times from inside the vehicle, breaking his rear windshield with one shot and then taking other shots at people nearby.

During this time, the vehicle is seen being periodically pelted with bricks, though no demonstrators are in the immediate vicinity.

Palestinian hospital official Qasim Daghlas said a 20-year-old man named Motaz Bani Shamsa was fatally shot in the head, while AP photographer Majdi Mohammed was shot in the hand. Mohammed was rushed to an Israeli hospital, where he was being treated for damage to three fingers.

Mohammed described a chaotic scene after the settler drove through the crowd. "He ran over people, and protesters started beating his car," he said.

When Israeli soldiers arrived to break up the violence, Mohammed said he pulled back from the clashes. He said he was putting on a gas mask when the settler opened fire.

"I put my hand on my head and I was hit," he said. Mohammed was wearing a helmet and protective vest at the time.

The Israeli man told Israel's Channel 2 that he acted in self-defense. He said he was driving home from the supermarket when he ran into the protest.

"I saw death in their eyes. They almost lynched me," said the man, whose face was blurred and name was withheld. "I managed to get out of there and get home in peace. I thank God for the great miracle."

The brother of the man, identified only by his first name Moshe, told Army Radio that his brother was a social worker and father of eight.

The Israeli military said troops were deployed to the scene to disperse what it called a violent riot. It said the man had admitted to opening fire, but claimed to have fired into the air. It said an investigation was continuing.

In a statement, the AP called for a full investigation into the shooting.