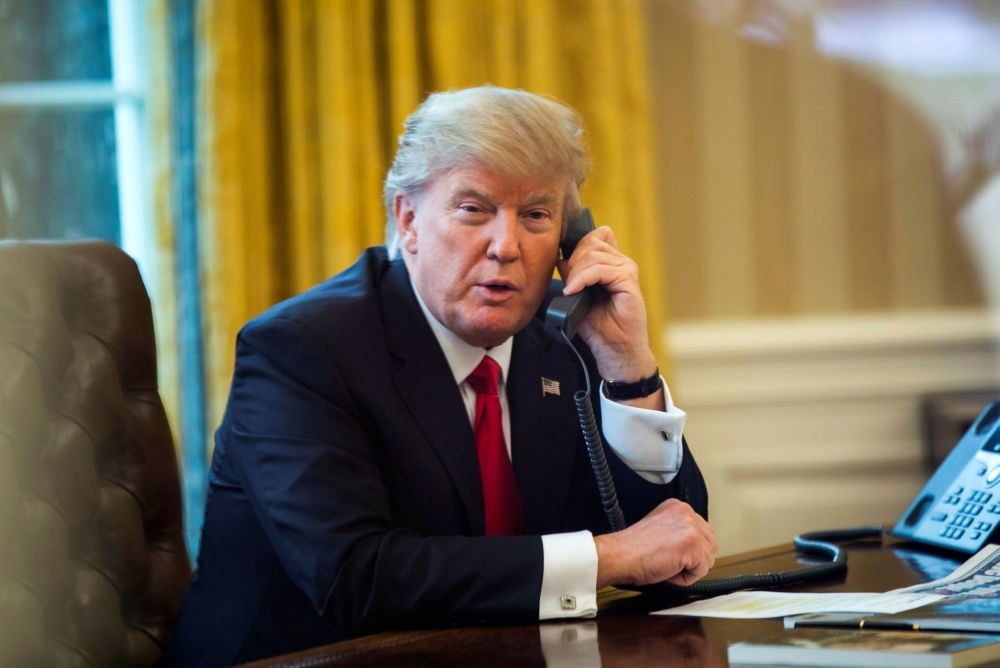 U.S. President Donald Trump speaks on the phone with the King of Saudi Arabia, Salman bin Abdulaziz Al Saud, in the Oval Office in Washington, D.C., Jan. 29.
by Compiled from Wire Services May 18, 2017 12:00 am

After turbulent years, U.S. President Donald Trump meets Saudi princes in Riyadh this Saturday as he can expect a warmer welcome than the one given a year ago to his predecessor Barack Obama, who Riyadh considered soft on arch foe Iran and cool toward a bilateral relationship that is a mainstay of the Middle East's security balance.

Beneath the pomp, Riyadh will be looking for assurances that the Trump administration will continue its notably harsher tone toward Iran and keep up pressure, through both rhetoric and action, to stop what Saudi Arabia sees as Tehran's destabilizing activities in the region.

Trump's visit to Saudi Arabia is the first stop on his maiden international trip since taking office in January. U.S. and Saudi officials are eager to highlight the powerful symbolism of an American president choosing to visit the birthplace of Islam as his first stop rather than to neighbors Canada or Mexico.

Besides meeting with Saudi officials, Trump will also meet with leaders of the six-nation Gulf Cooperation Council (GCC) and have lunch with leaders of more than 50 Muslim countries.

In March, Trump hosted Saudi Arabia's powerful Deputy Crown Prince Mohammed bin Salman at the White House, aiming to rolling back Iranian influence in the region. Saudi Arabia hailed a "historical turning point" in U.S.-Saudi relations. "This meeting is considered a historical turning point in relations between both countries and which had passed through a period of divergence of views on many issues," a senior adviser to Prince Mohammed said in a statement.

Trump's visit "sends a clear message that the U.S. is standing with its close allies in the region and that they're not abandoning them," a senior Saudi official told Reuters, reflecting the view many Gulf leaders had of Obama, who they considered had made securing a nuclear deal with Iran a higher priority than the U.S.-Gulf alliance.

Iran, which has been accused of exposing sectarian fault lines in the region, especially in Yemen, Syria and Iraq, tried to soften its rhetoric as Rouhani said there should be greater unity between Shiites and Sunnis and that they had coexisted side by side peacefully for hundreds of years. The main motivation behind the visit seems to be Trump's policies and his eagerness to better relations with Saudi Arabia, which was abandoned in the era of former U.S. President Barack Obama. During the Obama era, Iran enjoyed the opportunity to fill the vacuum in the Middle East after the White House abandoned its traditional allies, like Turkey and Saudi Arabia.

Referring to Iran as "the number one terrorist state," the U.S. president said the Middle Eastern country supplies money and weapons to terrorist groups. The Trump administration hit the ground running, re-imposing sanctions against Iran in its first weeks in office, and also instating restrictions against those who are complicit with Tehran.