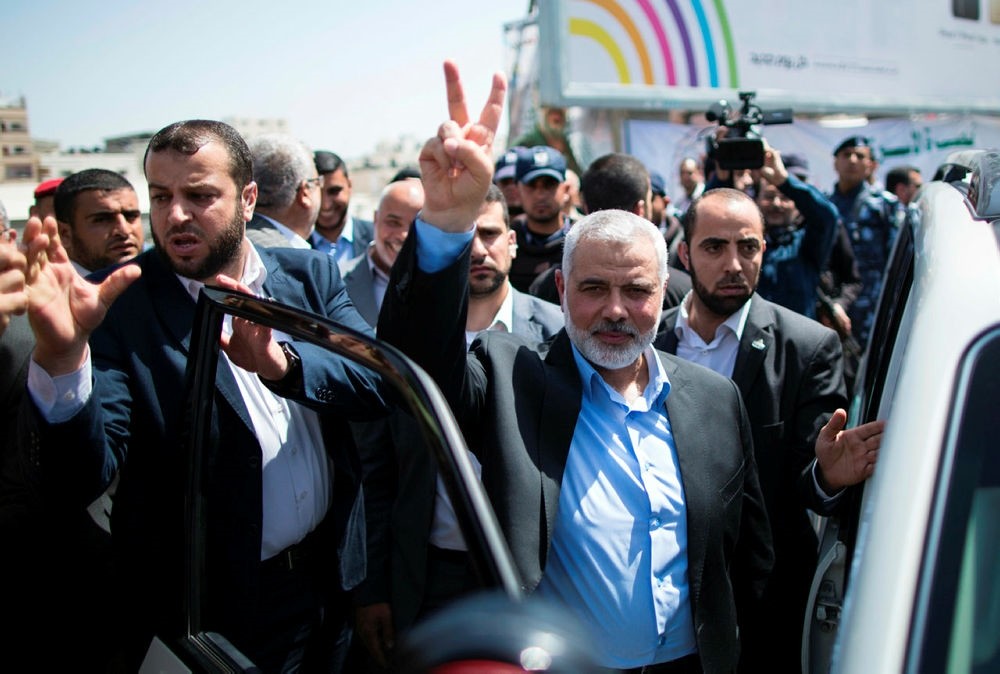 Newly elected Hamas chief, Ismail Haniya, flashes the V-sign after attending a rally in support of Palestinian hunger-striking prisoners held in Israeli jails. (AFP Photo)
by Daily Sabah May 21, 2017 12:00 am

Palestinian resistace group Hamas criticized U.S. Donald Trump for labeling the group "terrorist" in his speech in Saudi Arabia, saying the group fights against the Israeli occupation, not the West.

Spokesman Fawzi Barhoum says from Gaza City that Trump's remarks Sunday are a "misrepresentation of facts." He dubbed the speech a "confirmation" that Trump is following the policy of previous administrations.

Hamas says its battle is against Israel, not the West, and it has tried to rebrand itself by tweaking its charter. But the U.S., along with Israel and others, shun it as a terror group.

Hamas recently revealed the new road map for peace in the conflict between Palestine and Israel as he announced the group's revised foundation document in a press conference in the Qatari capital Doha.

Hamas recently moved to secure its position in the region by making a significant change to its administrative cadre while accepting collaborative efforts with Egypt to fight the presence of Daesh in Sinai. After declaring itself an entirely independent organization with no affiliation with any parent organization such as the Muslim Brotherhood, Hamas stated its intentions to mend ties with Cairo, as they both suffer from the presence of radical movements.

In its new program, Hamas redefines itself as a national liberation group, distancing it from its parent movement, the pan-Arab Muslim Brotherhood, which has been outlawed by neighboring Egypt. Ahmad Yusuf, a senior Hamas leader considered one the organization's pragmatists, said the new document signaled "an important shift in the way Hamas is thinking," that will give it more flexibility internationally.

In 1967, Israel captured Gaza, the West Bank and East Jerusalem from a coalition of Arab states in what is known as the Six-Day War. With the signing of the Oslo Accords, Israel withdrew from parts of the West Bank and handed over control in some pockets to the newly-created State of Palestine (Palestinian National Authority). However, Israel maintains strict military control over the movement between Palestinian pockets of control and to their east to Jordan, in addition to continuing construction of new settlements in Palestinian lands. Israel also withdrew from Gaza in 2005, but it is de-facto under Israeli blockade.