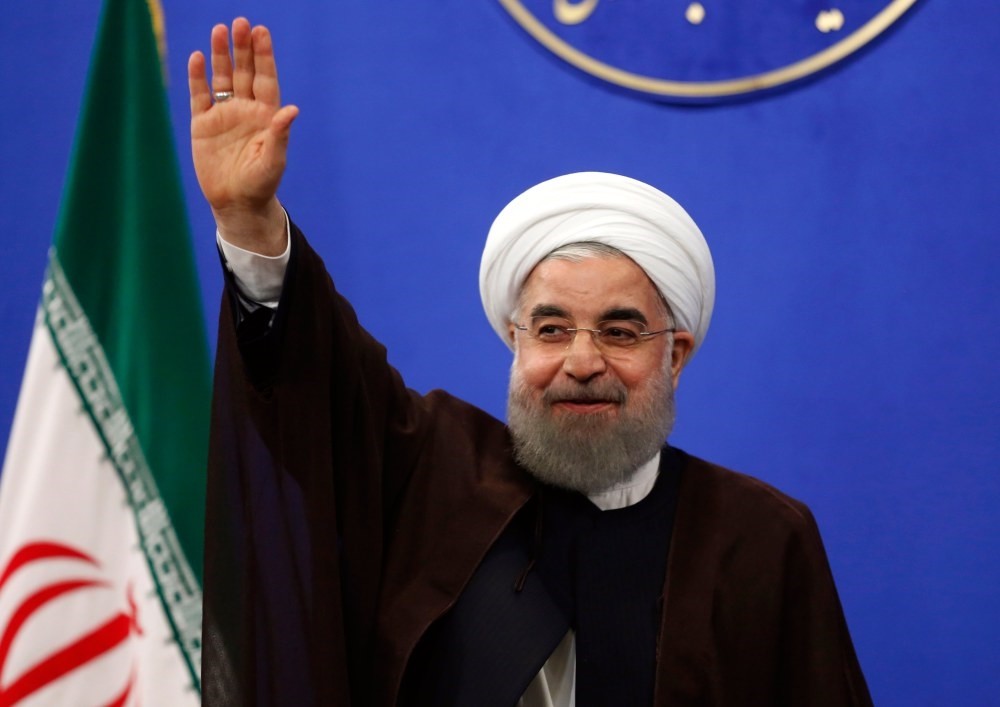 Newly re-elected Iranian President Hassan Rouhani gestures during a televised speech after his presidential election victory, in Tehran, May 20.
by Yusuf Selman İnanç May 22, 2017 12:00 am

Iran's incumbent President Hassan Rouhani has been re-elected by an overwhelming majority, yet experts say a major change in Iran's policies is unlikely since the hardliners and religious authority hold the ultimate power

Initial election results have indicated that the incumbent President Hassan Rouhani won the elections in Iran in what is considered to be a major blow to conservative challengers led by opposing candidate Ebrahim Raisi. While the official result will be declared in a few days, the results are being interpreted as the Iranians' desire for change, reform and breaking away from international isolation.

Interior Minister Abdolreza Rahmanifazli said, "With all of votes in Friday's poll having been counted, Rouhani was re-elected with 57 percent. Of some 41.2 million total votes cast, Rouhani got 23.5 [million]. ...and won the election. Raisi got 15.8 million votes."

During the campaign, Rouhani underlined that the election was a choice between "extremism" and "civil liberties." Criticizing the arrest of several reformist politicians and activists, Rouhani accused conservatives with putting Iran in a deadlock and in isolation. He has been unable to secure the release of those arrested because supreme leader Ali Khamanei holds the ultimate vetoing power for all policies and decisions.

The president has been harshly criticized by religious authorities and the conservative opposition for signing the so-called nuke deal with certain Western countries, led by the U.S. in order to ease sanctions after curbing the country's nuclear program. In return, Raisi accused Rouhani and his administration of damaging the Iranian economy and allying with the West.

Rouhani, who has been critical of the Iranian Revolutionary Guards (IRGC), may face further pressure in his second term as he accused the IRGC militants with "cutting out tongues and sewing mouths shut."

Over the weekend, Reuters reported that "Rouhani built his resounding win in Friday's presidential election by promising more economic opportunities for Iran's youth, as well as social justice, individual freedoms and political tolerance. He also picked a rare public fight with hardliners close to supreme leader Ayatollah Ali Khamenei, angrily criticizing their favorite in the race, Ebrahim Raisi, a judge seen by reformists as representing the security state at its most fearsome."

Reuters went on to report that "Rouhani, first elected in a landslide in 2013 on a promise to reduce Iran's diplomatic isolation, spent most of his political capital in his first term on a nuclear agreement with six powers that resulted in a lifting of most sanctions in return for curbs on Tehran's nuclear program. Domestic social reforms were largely ignored. But, in his second term, Rouhani will be under more pressure from his followers to deliver on changes at home. He has now contributed to that pressure himself by campaigning hard as a reformist, particularly in the final days."

Quoting Rouhani's critique of the IRGC, an Associated Press report said, "That gave hope to his supporters, who during recent campaign rallies called for the release of two reformist leaders of the 2009 Green Movement who remain under house arrest. The two figures, Mir Hossein Mousavi and Mahdi Karroubi, both endorsed Raisi, as did Mohammad Khatami, another reformist who served as Iran's president from 1997 to 2005. Iran has no credible political polling to serve as harder metrics for the street buzz around candidates, who need more than 50 percent of the vote to seal victory and avoid a runoff. But what scant data was available before the vote showed Rouhani in the lead."

While it was considered very difficult for Rouhani to bring major changes at home due to the ultimate power of the religious authority and the direct involvement of the IRGC in politics, his policies for Iran's role in the region will likely remain inadequate in stopping the bloodshed.

Iran's position of supporting the regime and the Lebanese-based Shiite militant group, Hezbollah, in Syria, radical Shiite militia Hashd al-Shaabi in Iraq and the Houthis in Yemen, is unlikely to change.

Hakkı Uygur, head of the Ankara-based Center for Iranian Studies (IRAM) told Daily Sabah, "Rouhani will continue implementing his policies to open Iran up to the world and bring an end to sanctions. Yet, the determinant bloc is the Saudi-U.S. one."

Stating that the concrete outcomes of the recent meeting between U.S. President Donald Trump and Saudi King Salman are waiting to be seen, he said relations between the U.S. and Saudi Arabia will affect Iran's position. As the U.S. prepares to sell more than $100 billion in arms to the oil-rich Gulf country, which is engaged in a feckless war in Yemen with Houthis, the region may not be cleared of conflict any time soon. Uygur also added that he did not expect any change to Turkish-Iranian relations that have been dealt major blows since the civil war broke out in Syria in 2011.