There is 'rare opportunity' for peace, Trump tells Israeli leaders 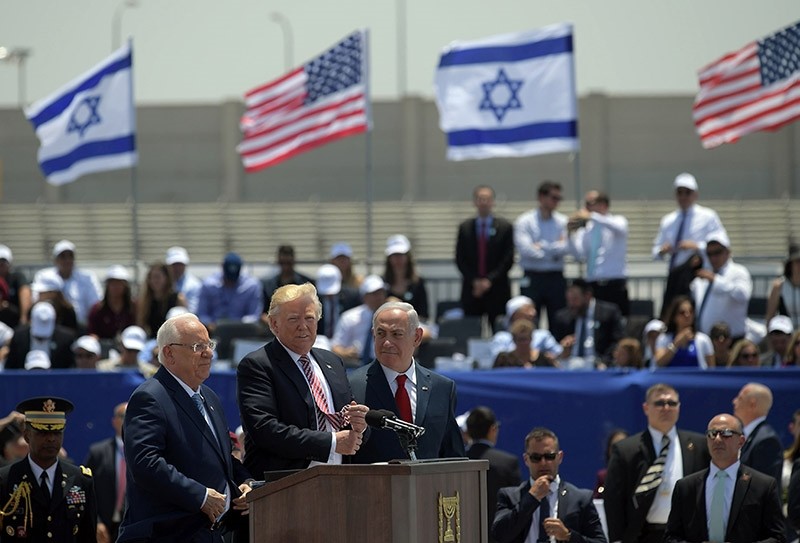 US President Donald Trump (C) stand between with Israeli Prime Minister Benjamin Netanyahu (C-R) and Israeli President Reuven Rivlin (L) during a welcome ceremony upon his arrival at Ben Gurion International Airport in Tel Aviv on May 22 (AFP Photo)
by May 22, 2017 12:00 am

U.S. President Donald Trump spoke of a "rare opportunity" to bring stability to the region as he landed in Israel on Monday to seek ways to restart Israeli-Palestinian peace efforts.

Trump also hailed the "unbreakable bond" between the United States and Israel as he spoke at a brief ceremony at the airport in Tel Aviv after landing.

"On my first trip overseas as president, I have come to this sacred and ancient land to reaffirm the unbreakable bond between the United States and the state of Israel," Trump said.

He said later: "We have before us a rare opportunity to bring security and stability and peace to this region and to its people, defeating terrorism and creating a future of harmony, prosperity, and peace. But we can only get there working together. There is no other way.

Trump also said that Iran must never be allowed to have nuclear weapons while also denouncing Tehran's support for "terrorists".

"Most importantly the United States and Israel can declare with one voice that Iran must never be allowed to possess a nuclear weapon -- never ever -- and must cease its deadly funding, training and equipping of terrorists and militias," Trump said in remarks at Israeli President Reuven Rivlin's residence.

"And it must cease immediately."

Trump will hold talks with Israeli Prime Minister Benjamin Netanyahu later in the day and travel to the occupied West Bank on Tuesday to meet Palestinian president Mahmud Abbas.